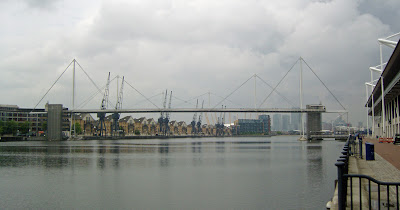 The last in my current set of bridges from London's Docklands is further east than the others, at Royal Victoria Dock. In 1995, the London Docklands Development Corporation held a contest to design a bridge spanning this huge, if now little used, dock. I featured some of entries here previously. 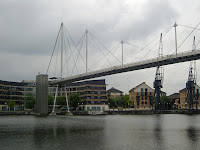 The winning design was a spectacular 127.5 span "inverted Fink truss" bridge, designed by Techniker with Lifschutz Davidson, completed in 1998 at a cost of £5m. It was originally intended as a transporter bridge, with a gondola active at low level. The bridge has, however, never seen enough use to justify installation of the gondola. The adjacent ExCeL exhibition centre is one of the venues for the London 2012 Olympic Games, which may see the bridge getting much greater use, at least for a short while.

There are very few bridges of the "inverted Fink truss" type around. The only other examples which come to mind are the Forthside Footbridge, at Stirling, and the Passerelle La Défense, in Paris, although there have been unbuilt proposals. A key challenge in designing the bridge was the need to maintain a 15m clearance to the dock, allowing tall-masted ships to pass below. This was imposed by the client upon competitors, and seems to me to have been what the kidz would now call an Epic Fail. In the absence of the gondola, to cross the bridge you have to ascend and descend multiple flights of stairs, or endure the mangy lifts. It's not even as if the view from the bridge is sufficiently exciting to justify the exertion. As the dock is hardly ever used by tall ships, I would have thought that a low-level structure with an opening element would have been a better choice.

If the gondola is ever installed, I think that opinion would be reversed, and I think that seeing the bridge operate as a modern-version of a Ferdinand Arnodin-style transporter bridge would be quite splendid.

A short distance to the north, an elevated walkway structure connects ExCeL to a Docklands Light Railway station, but the possibility of connecting this directly to the bridge via a ramp has so far been missed.

Viewed in elevation (as in the first photo above), the stair and lift towers, which are heavily metal clad, have a monolithic, blocky character totally out of keeping with the rest of the bridge. However, the bridge is generally viewed from a much more acute angle, and the towers are less problematic from most perspectives.

The bridge itself is a very strange beast, something like an elephant as it might be sculpted by Alberto Giacometti. The deck is just that, a promenade-style walkway translated vertically, and set upon comically spindly stilts. This is not entirely a bad thing, it emphasises the sense of the bridge as a platform rather than as a pathway. 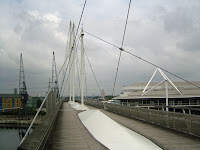 The cable and mast arrangement above the deck has a certain logic relating to the diminishing forces to be carried by successive cantilevers away from the supports, an approach repeated by the other inverted Fink truss bridges and which here appears justified by the visual scale of the bridge in relation to the dock sides. Single masts on the bridge centreline give a clarity to the composition which isn't harmed at all by the consequent need to have twin pairs of cables connecting the masts to both sides of the deck. The mast and cable arrays form a set of overlapping tetrahedra, with the variation in mast height eliminating any geometric clash of cables (except for the centre bay, where a link arrangement has to be used to solve this problem, see the photo).

I find the relationship of the above-deck masts to the below-deck support legs to be less admirable - it would have been great to have seen single legs relying only on cables for lateral stability. The sense of incongruity is enhanced by the adoption of a cigar-shape for both the legs and the masts, although this makes structural sense. 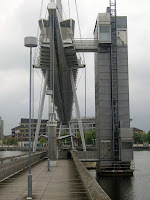 The bridge deck has a dual personality - Iroko timber decking and handrails give the feel of a promenade from above, while from below, it has the qualities of a metallic millipede, or perhaps the snout of a sawfish. Structurally, there is a steel box-section spine beam, with the deck and balustrades supported from cantilevered fins. The box incorporates a slotted element in its soffit which currently carries a maintenance gantry and which would carry the proposed gondola. The designers, Techniker, make great play of the fact that the main deck elements are not bolted or welded together, but pegged together and prestressed, which is a highly unusual choice for a structure of this type and scale. 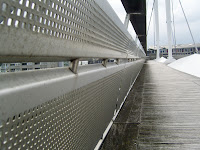 The balustrades are in perforated plate, which gives a greater feeling of security at this height than would a lighter-weight wire, rail or mesh solution, and also enhances aeroydynamic stability. As with most elements of the bridge, they seem to be lasting well.

The bridge deck at first seems very slender, although at deck level, it is apparent that this is because most of the spine beam box girder has been allowed to protrude upwards through the decking. 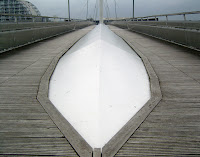 The steel box is profiled to carry the bending moment between points of support, in a similar manner to Castleford Footbridge. However, at Royal Victoria Dock, the opportunity to create areas of seating was missed. The boxes resemble upturned boat hulls, part of a nautical theme that persists throughout the structure (with its spars, cables, and bowsprits), but I think seats would have been preferable.

The Royal Victoria Dock Bridge is described by its designer, Matthew Wells, as having "reacted strongly against the prevailing fashion for iconic bridge structures presented as catalysts for urban renewal" (in Engineers: A History of Engineering and Structural Design (2010)). While there has been very little urban renewal at the site (the ExCeL centre is pretty much it), it's hard to see a bridge of this scale, idiosynractic choice of form, and modernist starkness as anything other than iconic.

I'll finish by noting that  there were plans to supplement this bridge with another further along the dock. In early 2010, a competition was announced, subsequently won by Ian Ritchie Architects. Ritchie came up with a number of suggestions, including a floating bridge, but a unique swing bridge solution, the "water boatman" was the favourite until Olympics funding cutbacks killed the entire scheme. It only emphasises what a mistake it was to require the 1998 structure to be so high in the air - while it resulted in a very heroic, spectacular design, it provides far from the ideal pedestrian experience.

Posted by The Happy Pontist at 9:39 PM