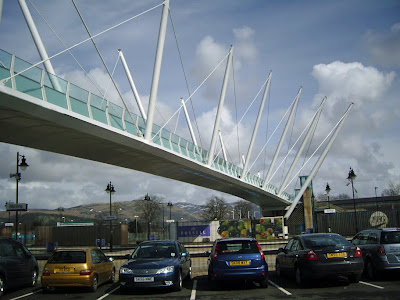 A recent trip to Scotland offered the chance to visit the Forthside Footbridge in Stirling, a landmark design by Gifford and Wilkinson Eyre (built by Nuttall), which was opened in May 2009. I discussed the design extensively at the time, so was pleased to be able to pay the bridge a visit in person. 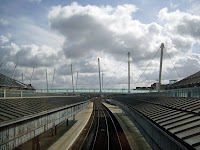 The £6.5m bridge essentially consists of two 113m long "inverted Fink trusses", side by side. It's not strictly an inverted Fink truss - such a structure would have large diagonal compression struts holding it up - but never mind, that's just a term popularised by the similar Royal Victoria Dock Bridge. Another way to think of it is a series of cantilevering cable-stay spans, each cantilever acting as the root of a subsequent cantilever. 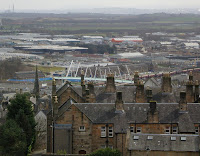 That's the theory, and certainly it gave the elevations and plans of the bridge a certain geometrical elegance, which can also be seen in the view along the railway line, above right. Most views of the bridge however, are more confusing, if undoubtedly spectacular. Looking along the bridge, the rationale behind the inclined masts is hardly evident, and viewed from further away, the effects of perspective become positively unkind. The picture on the right is the view from Stirling Castle, showing the masts appearing to lean inwards rather than outwards (the same is true in the next photo below). 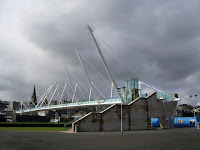 There's further potential for awkwardness in the bridge's end supports, one of which is pictured on the left. Due to the required clearance above the railway tracks, and the lack of space for ramps, a lift and staircase is provided at each end of the bridge. I'm not sure what I think about choosing to design the stairs as massive stone-clad structures, rather than a metal frame system that might be more obviously in keeping with the main bridge span. 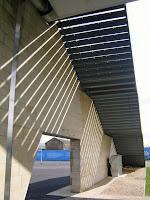 The staircase is positioned behind the main bridge support, and provides part of the anchorage structure for the bridge's main cables. Seen on its own, rather than as part of the bridge, the staircase looks quite attractive, as on the photo on the right, where the striped shadows created by the stairs give an attractive effect. Open risers, as seen here, are forbidden by the UK footbridge standard BD 29/04 [PDF] (presumably because they can create a trip hazard?), but as is so often the case, ignoring the prescriptions of standards can lead to a better design overall.

From under the bridge, the main supports can also be seen, where the massive tubular masts come to ground via a concrete plinth. These strike me as visually awkward, because they make clear the lack of a simple structural rationale for the arrangement of the bridge's masts. In the absence of any significant lateral loading (as may be imposed, for example, by a bridge with a curve deck), you instinctively expect a bridge to deliver its load to ground vertically, in line with gravity, making the inclined support here look odd. The discrepancy in size of the two columns also looks peculiar, as engineering instinct would predict the vertical one to be the larger. 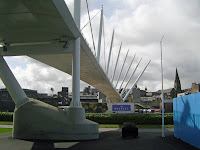 You can also see from below how the deck has been designed to resist the significant twisting forces which results from the cable-stay arrangement. The main deck members are two 550mm hollow steel sections, rotated 45° into a diamond configuration. These are connected by a grid of cross-members, onto which are fixed steel cover plates turning the whole thing into a very wide, not very deep steel box girder. The "cranked" appearance is, I think, purely for visual effect.

Back above deck, the pylons are consciously very simple in character, although they have odd little caps at their tip which I'm not sure I understand - perhaps they relate to hidden lighting in the masts? While the overall layout of stays and masts is visually confusing from many angles, individual sections of the bridge are simple and comprehensible, as shown on the right. This image, with white steelwork against blue sky ("azure a saltire argent", in heraldic terms), makes me wonder whether the choice of an inverted fink truss was a deliberate attempt to create a series of ascending Scottish saltires (although I doubt it). 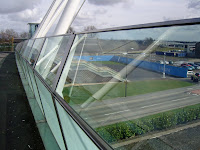 The bridge's complex geometry is also apparent in the glazed parapets. These comprise a 1m high panel of semi-opaque glass inclined inwards at 12° to the vertical, topped by a 0.6m panel of clear glass inclined at the same angle as the adjacent mast. That means that the upper part warps as you go along the bridge, and this is intended to subconsciously reinforce the pedestrian desire line, with the bridge opening out in the direction you want to go. It's an interesting idea, but I don't think the effect achieved really justifies the fussiness introduced. In any case, the use of glazing is welcome over a railway line, as anyone who has walked across a conventional Network Rail solid steel parapet bridge can attest.

On the whole, I found Forthside Footbridge to have many aspects to admire, despite the many unnecessary complexities which arise from its geometric formalism. The choice of an inverted Fink truss is appropriate to the span, construction challenge, and the visual context. A taller conventional cable-stayed bridge would probably have been visually inappropriate. It looks very attractive in elevation, even while resembling a stack of cascading toothpicks from other angles. As a designer, I'd certainly have gone for something with a simpler geometry, as the many challenges the bridge resolves are all of its own making. It's undeniably an impressive achievement by the structural engineers, and one deserving of recognition through awards.

Posted by The Happy Pontist at 9:05 PM

I have a soft-spot for 'inverted fink trusses' having puzzled my way through the structural behaviour during a design competition.

At this span, to me, the height of the masts becomes quite disproportionate, and the cables obtrusive - my own personal aesthetic choice would have been to try and minimise the cables by leaving them grey - against most Scottish skies the masts become a series of isolated posts!

That said, it's great to see a bridge of this structural type succeed at many of the aesthetic challenges it sets itself.

I have not yet visited this bridge, but was disheartened to read recently that the lifts at either end are frequently out of order as a result of vandalism.