I am an absolute sucker for these early-20th century suspension footbridges. A large number were designed and built by David Rowell & Co., with latticework towers and often unstiffened bridge decks suspended from wire ropes. Another prolific designer and builder was Louis Harper, who worked for James Abernethy as well as in his own right. 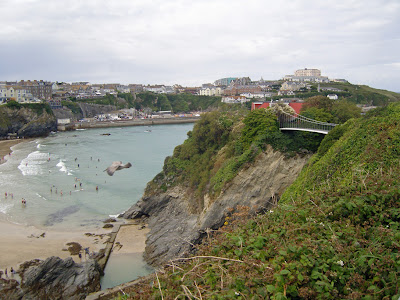 This particular example crosses from the Cornish mainland to Towan Island at Newquay, and is well known to locals and tourists, although seemingly not to the bridge community as it is not covered in any of the obvious books.

The excellent Harper Bridges website records that this bridge was reportedly commissioned by Victorian novelist Hal Caine to provide access to a summer house on the island. The bridge was originally similar in form to most of Louis Harper's suspension bridges of the periods, with lattice metalwork towers topped by pointed finials.

Another source reports that at one time there was a teashop on the island, with a toll of 2 old pennies charged to cross the bridge. The present house was built in the 1930s, and the bridge and island are both currently privately owned, although you could buy it for a mere £1.25m.

At some time, the latticework towers have been encased in concrete, presumably as a simple solution to a corrosion problem given the proximity to salts from the sea, which passes below the bridge. 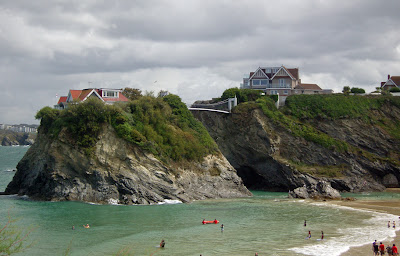 It's an unusually spectacular location for such a bridge, by British standards, with most of the contemporary examples spanning more gently between riverbanks. As it's private, I wasn't able to gain access to the bridge itself, but hopefully the photos give a reasonably clear idea of the structure.

The bridge spans only about 30m, short by the standards of modern suspension bridges. I think it's a huge shame that the suspension form is rarely used for this sort of structure today (at least in the UK - there appear to be bucketloads of them in Japan), and would attribute some of that to the tyranny of codes of practice and methods of analysis. Bridges like the Newquay one are relics from an age where bridges were the products of craftsmen who learned what worked from experience as much as relying on their methods of calculation. 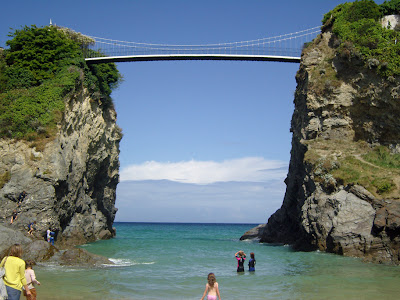 The equivalent firms to Rowell and Harper today, the specialist footbridge fabricators, produce in the main simple steel truss designs which are straightforward to analyse and efficient to erect. Little or no specialist knowledge is required. I wonder whether a place might ever arise again for a firm which would invest in R&D, develop its own system, use patent protection as a key source of income or monopoly, and help return us to structures which are lightweight and visually attractive.

Dear HP,
Thanks for showing us that beautiful spot - the bridge adding to the magic! Down under, we have this (less dramatic) bridge:
http://www.bridgemeister.com/pic.php?pid=4
It has a main span around 37m.
http://www.waterway.com.au/images/news/WW110509163235.jpg
Brief history in here:
http://www.woollahra.nsw.gov.au/__data/assets/pdf_file/0018/16272/Parsley_Bay_Reserve_Web.pdf

Very interesting comment about how the types of bridges we see in a given region sometimes comes down to cultural factors, even if we dress them up scientifically.

An interesting read on the subject is Constructing a Bridge, by Eda Kranakis. It explores early suspension bridge design in France and America and talks about how each country's cultures affected how designers approached the same structural form.

The Kranakis book is certainly very interesting, perhaps I should address it here some time!

Matthew Wells's recent book "Engineers" is particularly good on the way in which structural engineering history is highly dependent on local customs, traditions, and the idiosyncrasies of individual engineers, rather than being a logical technological development as is sometimes portrayed.