The opening highway and pedestrian bridges covered in the last two posts span the Bellmouth Passage at a high level, providing connectivity to vehicles and people at what is the normal ground level for the Canary Wharf site. However, there are promenade walkways alongside the Passage at its lower level, which until very recently were not connected. 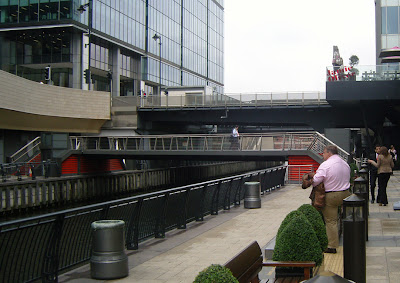 A new opening footbridge has been introduced to address this, midway between the twin highway bridges. 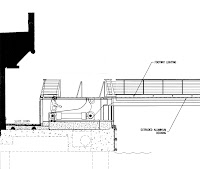 Somewhat unfortunately, the bridge has been installed above the promenade level, requiring the use of steps or very short lifts to reach it. What little I initially found online suggested that this is so that the bridge's opening machinery could be located above ground level. The planning application appears to confirm this: the promenade is a slab structure, and perhaps it was judged to be too expensive to reconstruct it locally to install a lower-level machine room.

There is also a constraint imposed by British Waterways, who required even the closed deck to provide 3m clearance to the waterway, which is 1.8m above promenade level. Click on the image above right for an extract from the planning drawings illustrating the arrangement. 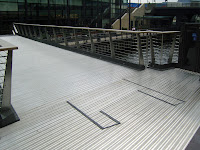 The span is a single-leaf bascule bridge, with the hinge on the west side well disguised within the floor panels (see the image on the left). The bridge deck consists of a steel box girder supporting aluminium deck planks and stainless steel balustrades. 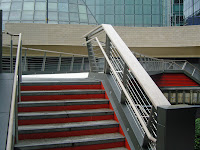 The bridge abutments are clad in red and grey, providing a welcome splash of colour amongst the generally monochrom surroundings. It's a quintessentially modern, technological bridge, which in this colour scheme wouldn't look out of place at the McLaren HQ in Woking, but offers anonymity rather than being particularly high-quality.

Perhaps there is more boat traffic through here than I suspect, but I find the decision to raise this bridge above the surrounding promenade to be a real disappointment, whatever British Waterways may have said. It's a two-fingered salute to the less able-bodied and visually it detracts from the waterfront space.

I have nothing else to report - I don't know for sure who designed or built the bridge (Adamson Associates are the architects responsible for the planning submission, and Atkins are credited with the development of the opening mechanism proposals), or when precisely it was built, and neither Google nor Bing show it on their current satellite imagery. Please post in the comments if you know anything more!
Posted by The Happy Pontist at 9:34 PM