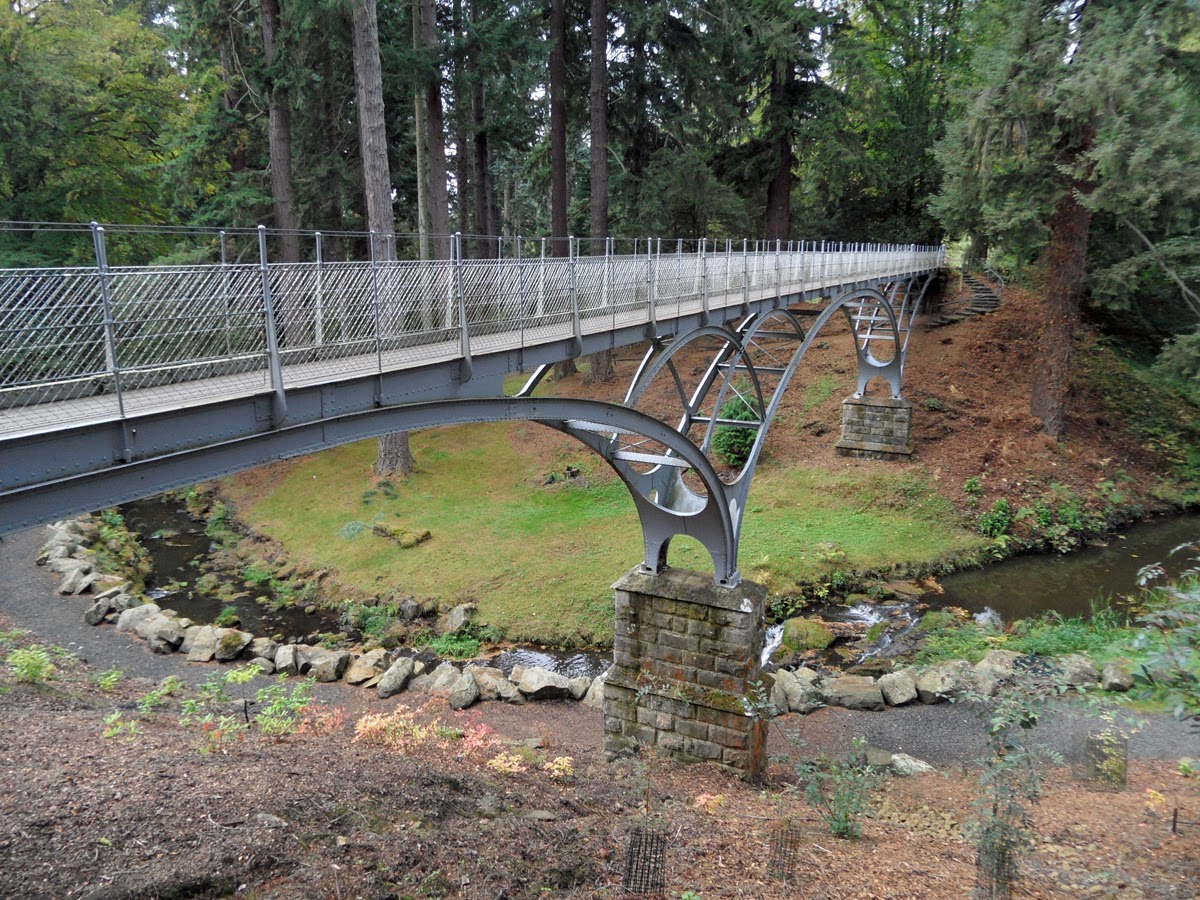 It's been about 2 months since I posted anything from the IABSE study tour of North East England. I've previously covered the bridges we saw on Teesside and in Durham, on the first day of the tour. The second day begun with a detour north from our Newcastle base, to the Cragside estate at Rothbury, in Northumberland. 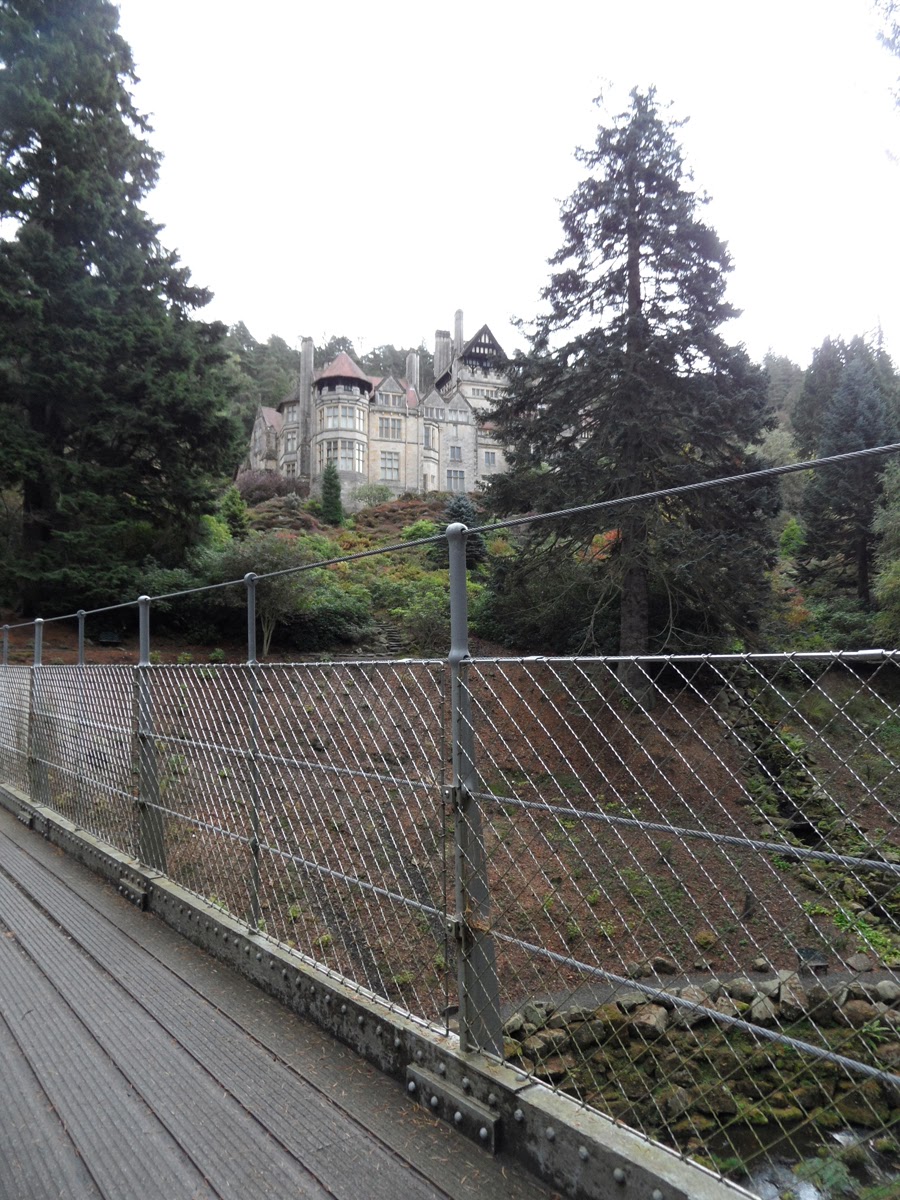 This bridge seems to be overlooked in various books about bridges of the region, which is odd, as it is one of the finest in the area.

Cragside was built in the late 19th century for Lord Armstrong, a pioneering industrialist. It incorporated a number of engineering innovations, such as hydroelectric power and electric lighting. Not a great deal is known about the beautiful bridge in its grounds, reported to have been designed in 1864, and built some time between 1870 and 1875. 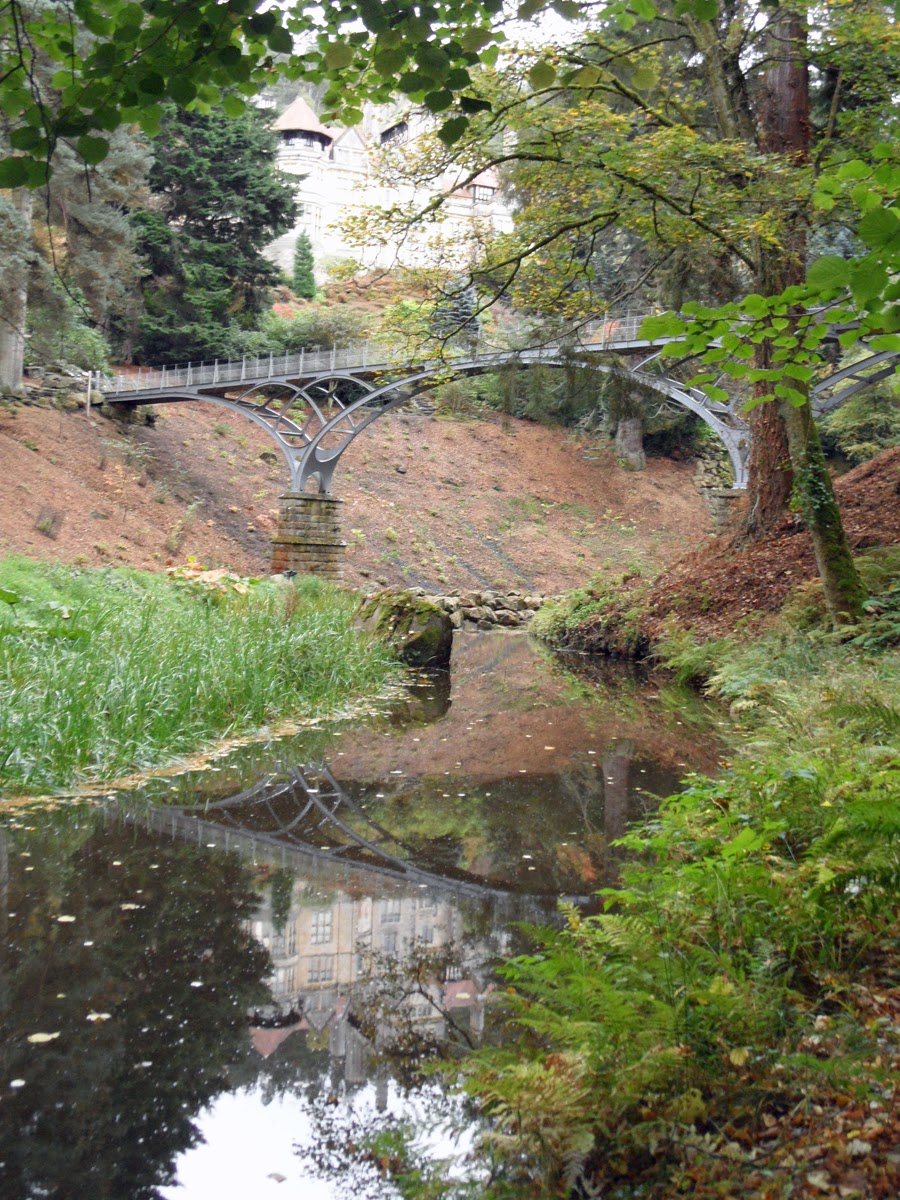 Over the years, there has been considerable speculation that it was a very early steel bridge (although it is generally named the "Iron Bridge").

The bridge was extensively refurbished, winning a Historic Bridge and Infrastructure Award in 2009, and the description of this work states that it comprises wrought iron. On our visit, we were lucky enough to meet the National Trust engineer responsible for the site, who showed us a number of interesting photographs of the refurbishment works. The bridge was strengthened by the addition of a number of very discrete steel plates, rivets replaced, and new handrail posts installed. 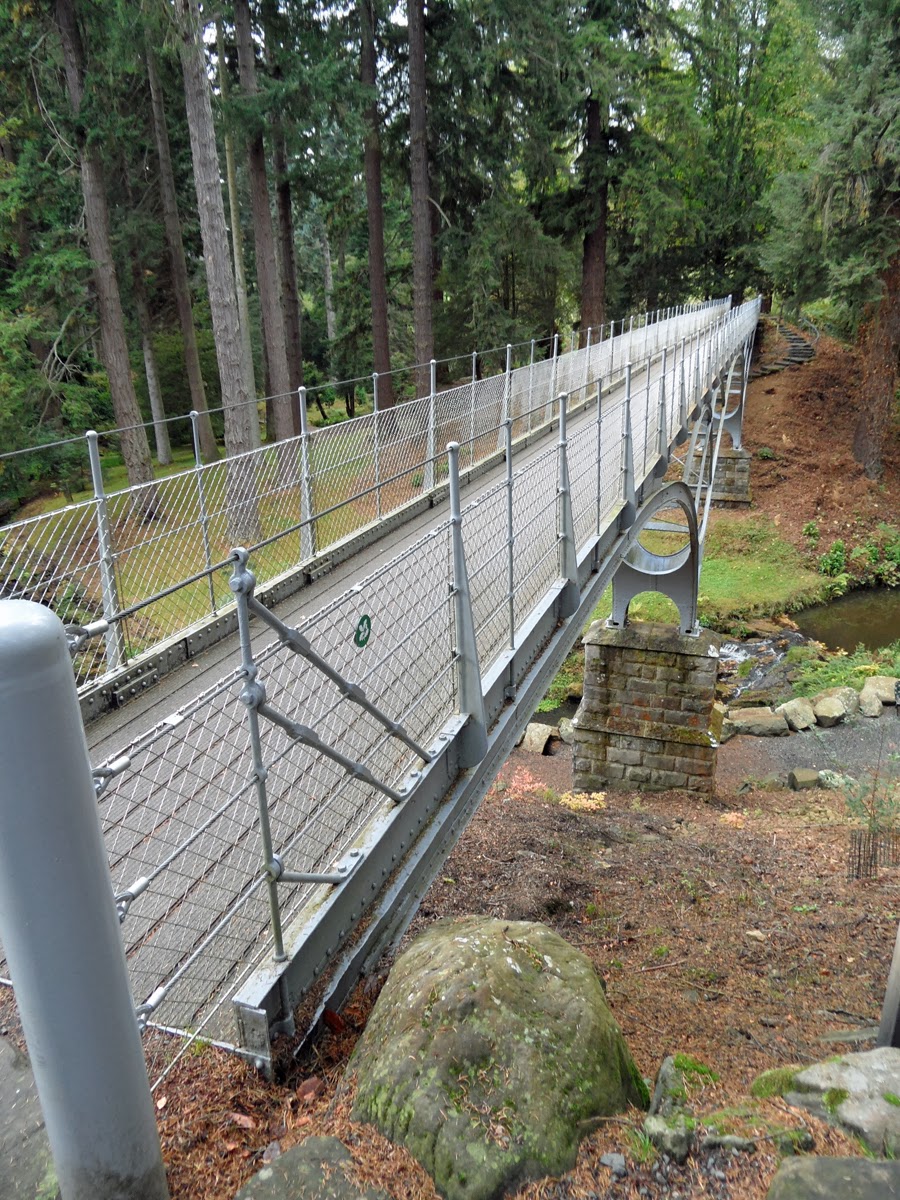 Loads on the handrail posts have been reduced by tensioning the parapet wires between bollards at each end - this allows the posts to remain much slimmer than would otherwise be the case. Keeping the parapets minimal must have been essential for a bridge like this, to avoid them detracting from the elegance of the rest of the structure.

The main structural system is charming yet structurally illogical. The bridge is supported on a single arch in its main span, with two half-arches to either side, acting as much like a cantilever bridge as a genuine arch structure. The arch ribs are attractively slender in elevation. 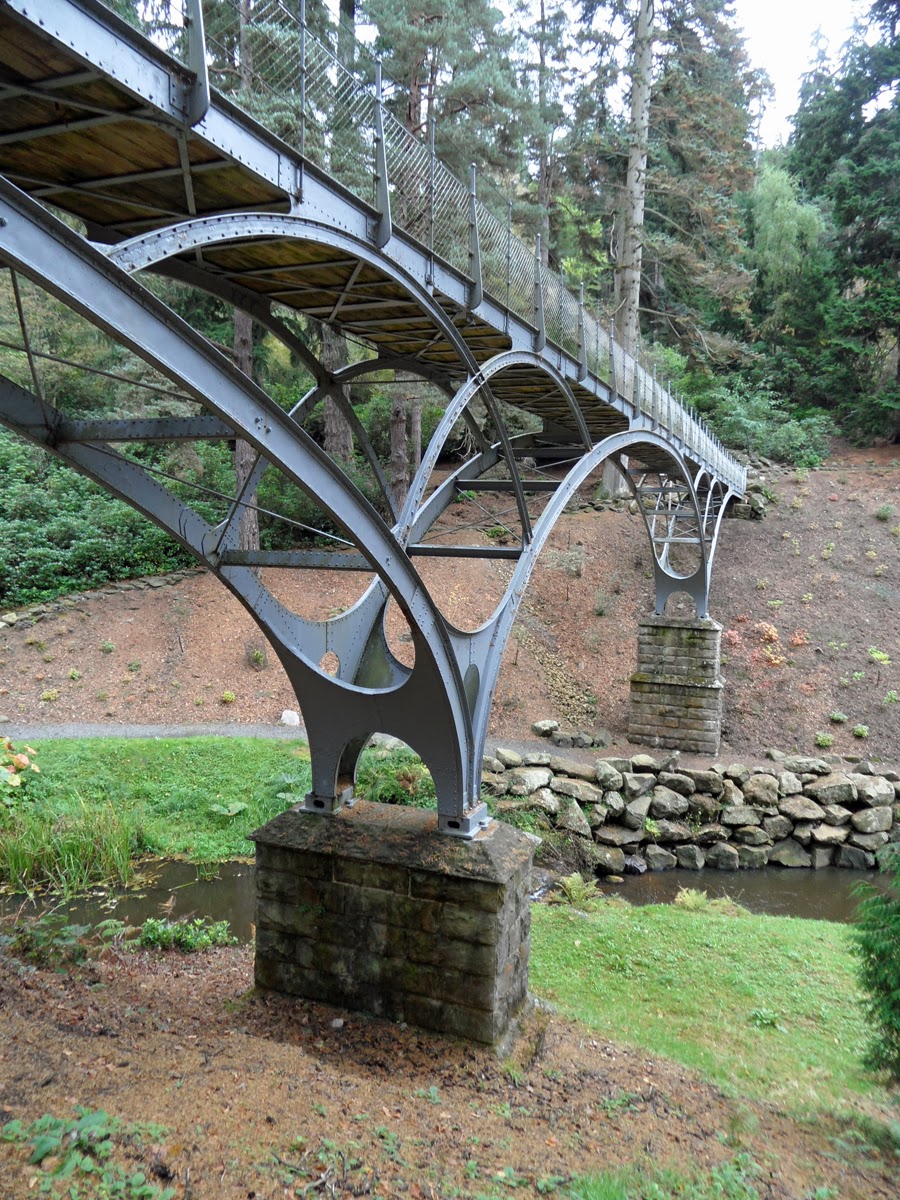 Each spandrel is infilled with two intersecting arches: this is the aspect of the bridge which defies structural logic, as what looks at first glance to be a nicely layered set of structural forms results in the application of significant concentrated loads transverse to the arch ribs, introducing a bending moment which greatly diminishes material efficiency. However, a "correct" geometry for this system would introduce kinks into the main arch ribs, which would clearly be visually unpleasant. The structural eccentricity is therefore easily justified, and the only result is that the bridge's overall load capacity is greatly reduced. Given its location, that doesn't seem a major problem. 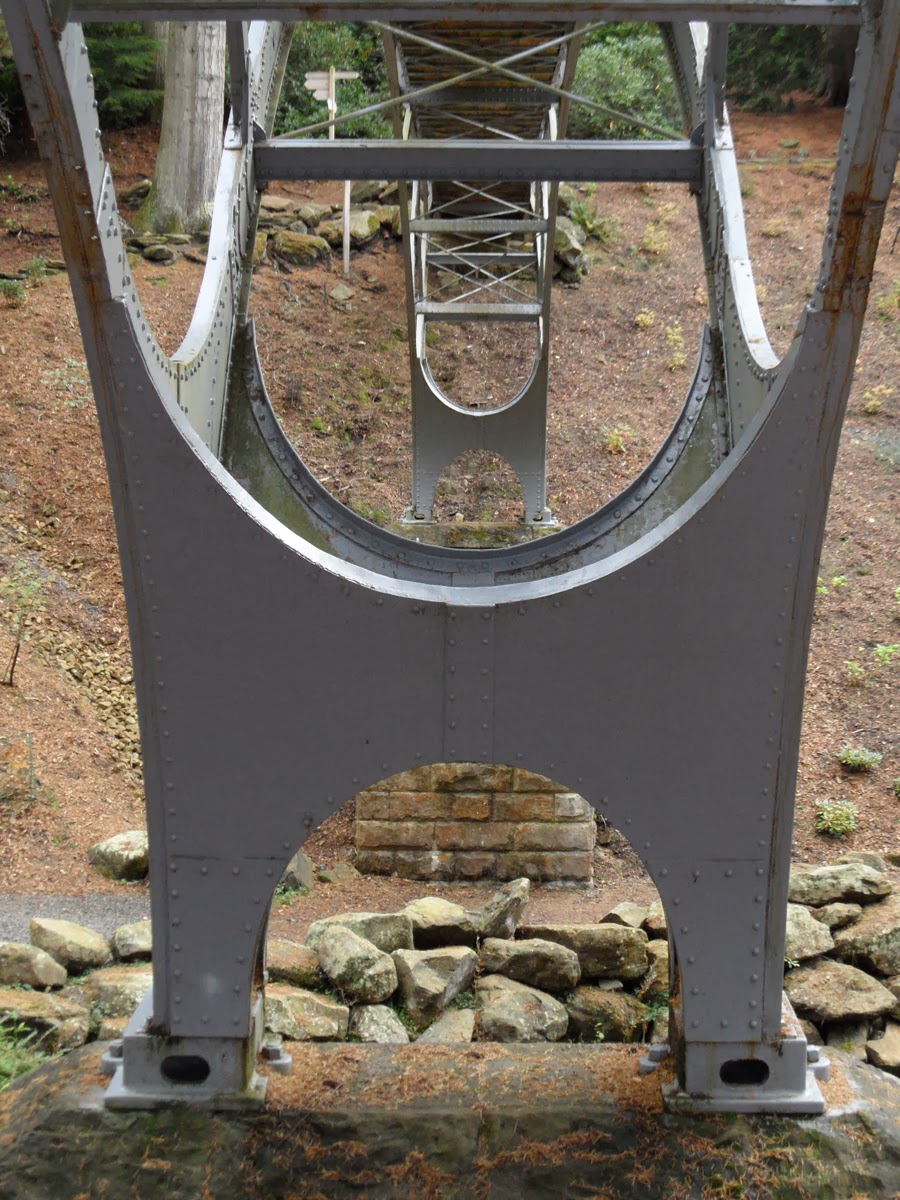 Viewed from below, along the axis of the deck, the bridge's most striking feature consists of the rather massive plates linking the arch legs together, and providing stability against transverse sway. While these have a somewhat weighty look when set against the more filigree elevations, the curves and echo of the main arch forms makes them appear at least half-reasonable.

As is often the case, the structural engineering quibbles are irrelevant when the bridge is considered as a whole. I can think of few comparable structures - it has some similarities to the celebrated Pont des Arts in Paris, but I think the Cragside bridge is the more attractive of the two. Within the United Kingdom, it's easily one of the most beautiful historic footbridges that we have.

Further information:
Posted by The Happy Pontist at 8:33 PM 5 comments: