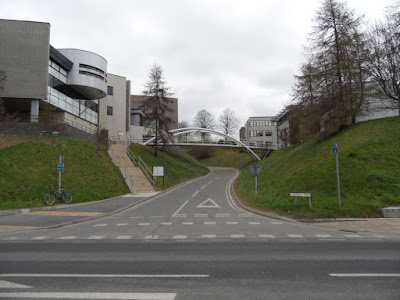 Here's a third footbridge at the University of York. This one connects two college buildings across a small highway, and was built some time before 2010, although I can't find any information on the exact date, the contractor, or the designer.

This is a fairly straightforward steel arch bridge, although there are a few features of note.

The first is its asymmetry, with the arch ribs founded at one end close to deck level, and at the other end below deck level. I'm only guessing, but I wonder if this is due to an obstacle to foundations at one end, such as buried services. This may also explain the slightly odd struts supporting the deck at one end.

Joints in the deck edge stringers have been simply detailed, and most of the rest of the bridge is also straightforward and attractive, including the balustrades.

The choice of paving is unfortunate, with some of the paving slabs coming loose. I would think these will be a perennial source of problems. 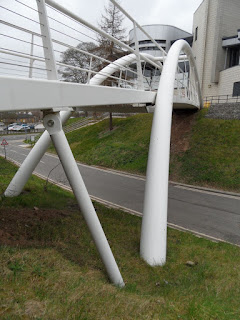 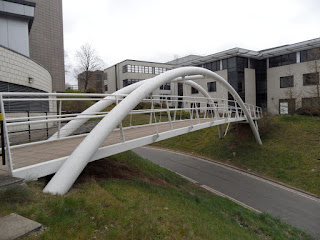 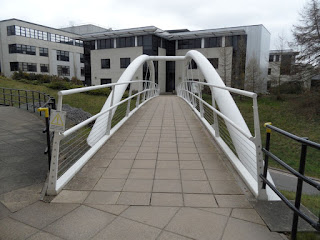 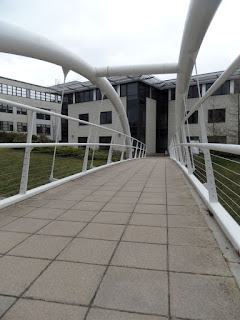 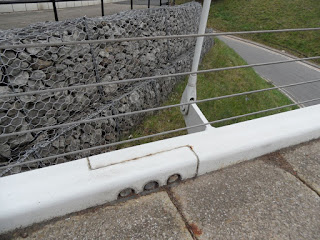 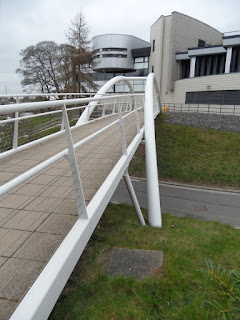 Posted by The Happy Pontist at 8:20 PM No comments:

Here's another interesting little bridge at the University of York's Heslington Campus. 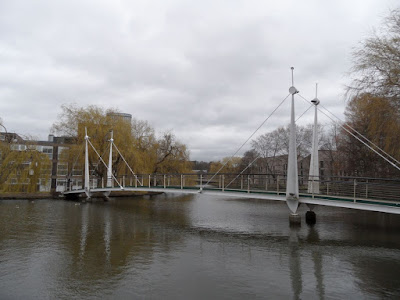 I've been unable to find out anything about when this bridge was built, or who was responsible, so if any readers can provide further information, please share it in the comments.

The bridge spans an artificial lake between two colleges, and fits the surroundings well, with a height that isn't any taller than nearby trees.

There are a number of things that I like in this bridge. The first is the very slight angle to the towers, which helps give it an open feeling, perhaps even a little jaunty. Vertical towers would look stiff and formal by comparison.

The towers themselves are nicely tapered, and attractively simple in their chevron cross-section, which ensures all sides of the steelwork are accessible for maintenance and repainting (or cleaning, should somebody be bothered).

I also like the way the towers are perched on tiny pin-pricks of steelwork, the entire bridge perched on as little as is necessary to hold it up.

I admire the modesty of the bridge deck, with simple timber decking and straightforward balustrades. The bumblebee ends to the balustrade rails, presumably intended to warn drunken students against tumbling against them headfirst, are the only jarring note. 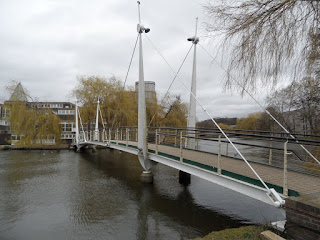 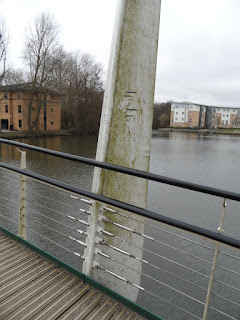 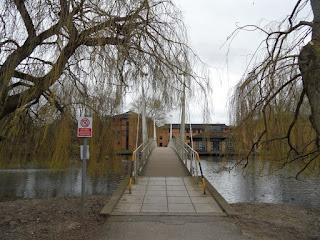 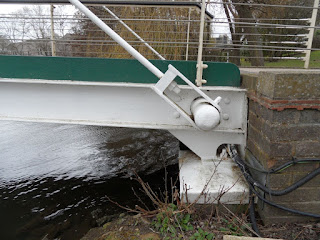 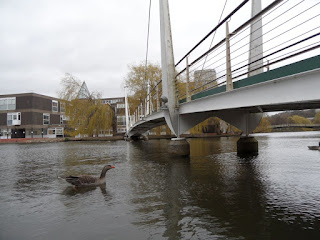 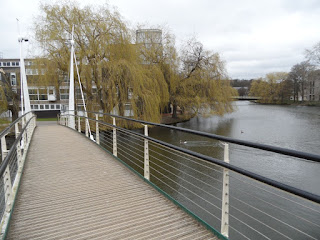 I visited the University of York a while back. The main campus is built around an artificial lake which is crossed by a number of footbridges. 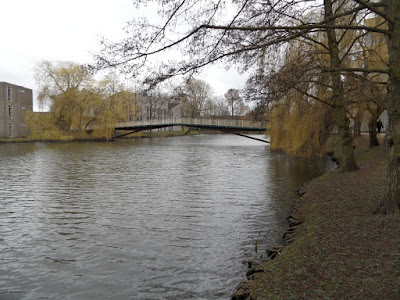 As it turns out, the patina is probably the bridge's least interesting attribute. It's an attractive dark brown, which looks like it has stabilised well. There's no sign of ongoing corrosion anywhere, indicating that the bridge was well detailed, and no evidence of graffiti or other vandalism. The bridge drains freely into the lake via a series of scuppers along each edge.

The bridge's main interest is in its shape. It is wonderfully slender in elevation, broadly taking a three-pinned "arch" form which is vaguely reminiscent of Robert Maillart's Tavanasa Footbridge.

The deck consists of two steel box girders, each triangular in elevation. They are deepest at their points of support, which consist of slender steel box struts carrying the loads back to the abutments at a very shallow angle.

All this looks quite delightful in elevation, but is just plain odd when viewed at closer hand. The struts are much narrower than the deck girders, so it's apparent that there must be significant internal diaphragms within the boxes to transfer loads between the main structural elements. I'm struggling to see the rationale, either architectural or structural, for doing this, as the forces just don't seem to "flow" down to the ground.

Nonetheless, this is an attractive bridge, which has survived well, and clearly demonstrates both the longevity of weathering steel, and its ability to sit attractively within semi-rural surroundings.

There are some other interesting footbridges at the same site, I'll post details when I get a chance. 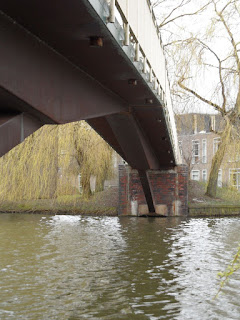 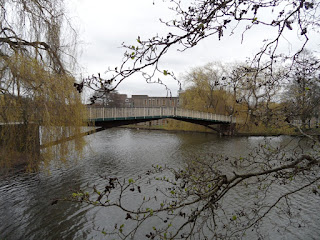 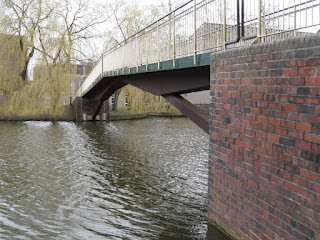 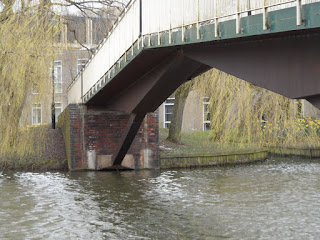 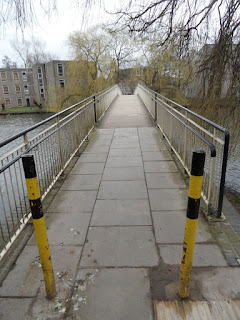 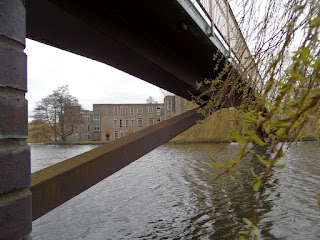 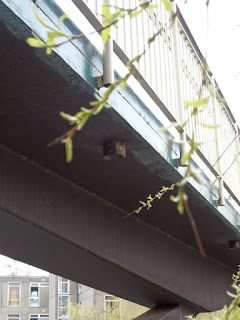 Posted by The Happy Pontist at 11:10 AM No comments: 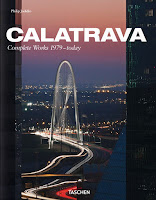 Weighing in at 596 full colour pages for £35, Philip Jodidio's latest Calatrava tribute is exceptionally good value for money (Taschen, 2015). It updates an earlier edition, and at first glance seems to offer everything anyone could possible want to know about the world's favourite Spanish architect/engineer.

In fact, there's a clear breach of trading standards law on the proper description of goods here: despite the voluminous contents, this is nothing like a "complete works", with a large number of projects relegated to a list in an Appendix rather than featured properly. Of the four Calatrava bridges that I've written up on this blog, two are included (James Joyce Bridge and Ponte della Costituzione) but two are not (Katehaki Bridge and Trinity Footbridge). So, set the title to one side before considering a purchase.

It's no surprise that this is a super-fat brochure rather than a work of architectural criticism. Jodidio's stock in trade is invariably affirmative, congratulatory fare, and there's little here to enlighten the curious reader about the success, or otherwise, of Calatrava's completed works. Instead, this book is about bludgeoning the recipient with space-age spectacle: page after page after page of visually stunning, technologically futuristic geometries wrought in economically and environmentally unsustainable mega-tons of concrete and steel.

It's principally a visual book, with lightweight text making way for countless large-scale photos of Calatrava's characteristically grandiose oeuvre. There are some images at Amazon

which will give you a good flavour of the style. Many of the photos are united by the absence or near absence of humanity, architecture frozen in that perfect moment when the cranes have left the scene but the public have yet to arrive, majestic sculptures unblemished and unsullied by the messy business of real people, traffic, or the stains to be accumulated in later life by inadequate maintenance.

In this respect they contrast significantly with Calatrava's sketches and watercolours, plenty of which are included. These frequently reference the human scale, and the relationship of the designer's abstract geometries to a poetic understanding of birds, the body, the eye and other humanist and natural inspirations. It's often interesting to try and trace a relationship between the architect's delicate and beautifully coloured artwork to the bleach-white structures that result.

Despite its flaws, I'm very glad I acquired this book. Calatrava is a monumental egoist, but also a singularly creative talent, and rare amongst architects for his willingness to exploit and explore structures rather than simply to hide them behind facades. His designs for various transportation hubs and stations are frequently spectacular in a positive way, sitting somewhere between the greatest Victoria station sheds and lofty cathedral spaces.

His designs are often uncompromising in their willingness never to say "no" - many would baulk at the challenges involved in realising his more epic designs, and there is surely a place in the world for the gargantuan, the astounding and the lavish. At the same time, Calatrava is a master of small details, of shaping not just the overall form but every element to work well together.

I particularly admire his occasional debt to history, as in the sweeping roof forms of the Bodega Ysios winery, which are a direct tribute to Antoni Gaudi's school building in Barcelona.
Posted by The Happy Pontist at 7:26 PM 2 comments: