The two opening highway bridges featured in my last post are supplemented by two opening pedestrian bridges. These are covered walkways providing links across the Bellmouth Passage between office and retail facilities. 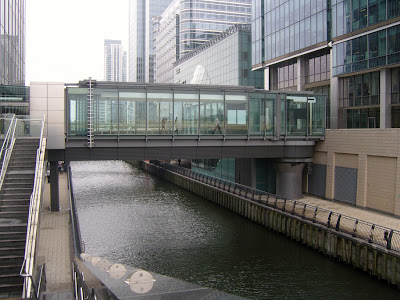 Unlike the road bridges, which were an unusual bascule variant, the twin footbridges are swing bridges, although again they are highly unconventional in their form. 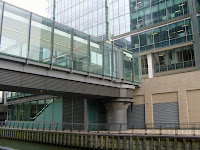 The spans were designed by Patel Taylor and Techniker, who won a contest against five other design teams (two of the unsuccessful proposals are available online here and here, and a third is pictured in Mike Schlaich's book Footbridges).
The design is strikingly simple yet highly audacious. The bridge structures consists of a cellular box beam supporting a glazed superstructure, and supported (when open) at only one end, on a huge pivot. 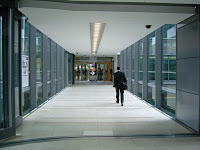 In a conventional swing bridge, there is at least a short back span behind the pivot, to counter-balance the main span. At Bellmouth, the impression is given of a walkway structure held up by magical sky-hooks. In reality, the counterweight is contained within the part of the structure above the pivot, something which makes my belly feel queasy, and which could only ever work for such short, light spans as these.
Further information:

Posted by The Happy Pontist at 9:44 PM