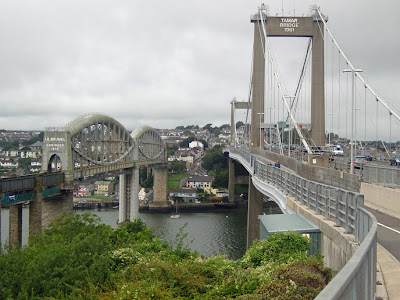 What is there that I can sensibly say about Isambard Kingdom Brunel's greatest bridge (pictured, above left)?

First, the facts. The bridge was opened in May 1859, four months before Brunel's death. The two main spans of 138.7m are achieved using giant lenticular trusses in wrought iron. The upper chord of the truss is a single tube, oval in cross-section, 5.1m wide and 3.7m high. The lower chord consists of wrought iron chains, with vertical members carrying the loads from the deck into both chords. It's a design with split personalities - as well as the idea of the lenticular truss, you can think of it as a bowstring arch bridge, or as a self-anchored suspension bridge in which the main cable forces are anchored into an overhead strut rather than into the deck. 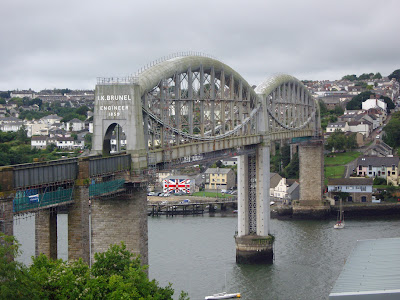 In this respect, the design was a development of Brunel's 1852 bridge at Chepstow, where again a simplified suspension arrangement relies on tubular strut for its anchorage (although at Chepstow, the strut was circular). Another predecessor was Brunel's 1849 bowstring arch at Windsor.

The Royal Albert Bridge also owed more than a little debt to Brunel's great friend and rival Robert Stephenson. His High Level Bridge in Newcastle was also completed in 1849, and has a series of bowstring arches carrying the roadway, with the railway on a separate deck above the arches. The idea of superimposed systems may have influenced the Royal Albert Bridge, but another Stephenson design was even more relevant, the Britannia Bridge.

Opened in 1850, the two main spans at Britannia were very similar to Royal Albert, at 140m. The same method of erection, by floating out and lifting vertically, was also used on both bridges. The Britannia Bridge (along with a related structure at Conwy) had pioneered the use of riveted wrought iron box girders, although used in a beam arrangement rather than as struts as in the more complex Brunel design. Stephenson had even suggested the use of an oval box girder at Britannia, although William Fairbairn's preference for a rectangular section proved more appropriate. 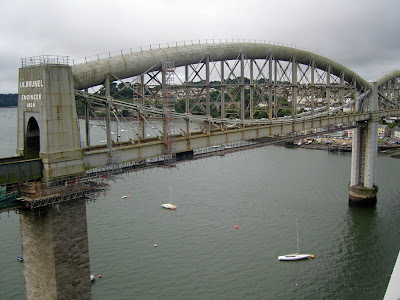 Brunel's Royal Albert Bridge was a more sophisticated design all round, but not of a type which would see much further use. The first major Warren truss bridge had been built in 1852, and lattice trusses such as the Runcorn Railway Bridge were soon to come into favour. Truss bridges were simpler to assemble than box girder designs, and used significantly less material. Nonetheless, Brunel's lenticular truss certainly didn't stand alone, with several other examples built by von Pauli and Lohse in Germany, and by Lindenthal and the Berlin Iron Bridge Company in America.

None of this is to detract from the Royal Albert Bridge. It may have been a technological dead end, but it remains a remarkable design and a spectacular structure. 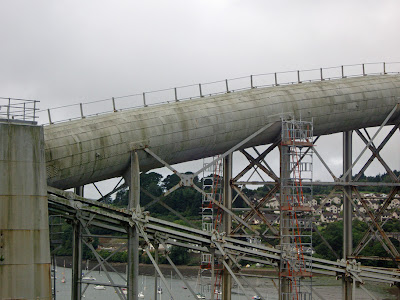 I particularly like the texture of the main arch girders, with the riveted plate form very visible. The evidence of handicraft is a welcome contrast to the more impersonal surfaces that modern welded construction produces.

Perhaps less appealing are features which I presume to have resulted from strengthening works over the years. Chief amongst these are the diagonal bracing members immediately below the suspension chain, which aren't visible on older photos, and detract from the clarity of the structural system.