There have been some pretty weird opening bridges in my last few posts. The Limekiln Dock bridge is perhaps unique amongst swing bridge designs, with its rotating pylon and strutted, offset, asymmetric main span. The same is true of the upper-level Bellmouth Passage footbridges with their lack of any counter-balance back-span. The Bellmouth Passage road bridges are bascule bridges with ring girder supports rotating about a virtual pivot, and again probably unique.

You don't have to walk far from these (all in the Canary Wharf area in London Docklands) to find yet another unusual opening bridge, at Great Wharf Road. 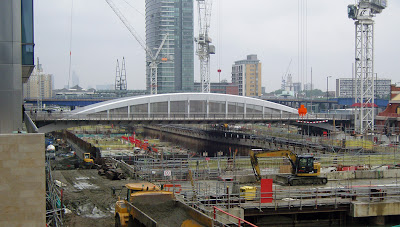 The structure is a 65m span highway bridge, opening like a bascule bridge, i.e. hinged at one end while the other end rises into the air. Most bascule bridges have an unlimited air draft i.e. once raised, vessels of any height can pass through, but that is not the case here. Instead, the bridge lifts only 18m at its tip, which is raised directly by an enormous hydraulic ram. In most bascule bridges, the lifting equipment is positioned near the pivot end, and a substantial counterweight is required so that the ram carries only a small load.

Here, the span is too great for that type of bascule bridge, and there is no space for the counterweights that would be needed for a double-leaf bascule (the obvious solution, along with a lifting bridge). 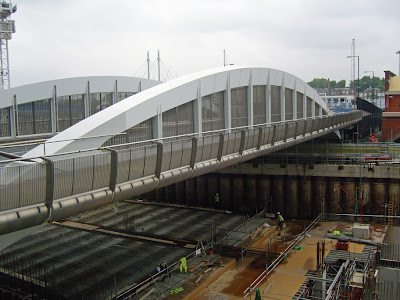 The bridge was designed by Gifford with Wilkinson Eyre. The exemplar mechanical design was by Atkins Bennett, and detailed design by Davy Markham. The structure was fabricated by Hollandia. The hydraulic piston which opens it supports a load of up to 660 tonnes. There are images of the bridge opening at the Atkins Bennett website which should make the mode of operation clear.

It's notable that the bridge as-built is a value-engineered version of the original design, which is shown in the image on the right (click to see a larger version). The concept design covered the two footways in glass enclosures. The only element of these to survive is a peculiar semi-transparent panel which fills the space between the arch and the deck - it seems somewhat redundant in the current arrangement. 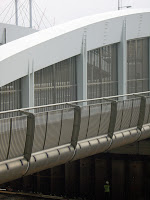 The Wilkinson Eyre influence remains apparent in the detailing - I like the way the hangers interface with the arch ribs, for example.

The link below to Bing maps shows the bridge how it was - spanning the water of West India Dock. Use by vessels requiring the bridge to open was rare, and I believe it was designed only to open 12 times a year.

The link to Google maps, and my photos, show the bridge's current situation. Most of the dock has been turned into a giant cofferdam for the construction of the Crossrail Canary Wharf station. The cofferdam is some 256m long, 45m wide, and up to 28m deep. Parts of the Great Wharf Road Bridge deck had to be temporarily cut out to allow the dam wall to be installed, and the bridge now spans one of the largest construction sites in London.

Once the station works are complete, the bridge will span above an area of landscaping combined with much reduced waterways. I am unsure whether it will still be required to open.
Further information: