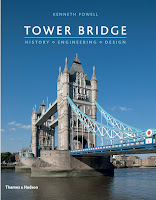 Tower Bridge: History - Engineering - Design (Thames and Hudson, 192pp hardback, amazon.co.uk) has recently been published to mark the occasion of the bridge's 125th anniversary (which falls on 30th June this year).

The bridge is one of the most iconic and memorable in the world, and it certainly merits this excellently researched and beautifully presented volume.


The title is a good guide to the contents, which emphasise the achievement of the engineers involved and avoid the temptation to focus on the bridge as an architectural artefact.

The book starts out not with the bridge but with the River Thames itself, the earlier river crossings, and the role of the Pool of London as a key part of the city's port facilities prior to the construction of new docks at the Isle of Dogs in the early 19th century. Setting the tone for the rest of the book, this section is copiously illustrated with old photographs, plans and paintings.

Until the Dartford Crossing was finished in 1991, Tower Bridge was the last bridge across the Thames before the sea. Prior to its completion in 1894, that honour had been held by London Bridge for over 600 years.

As well as discussing the history of several of the key Thames crossings (both bridges and tunnels), the book features several that were never built, such as George Dance the Younger's 1800 idea to replace London Bridge with two parallel bridges, and Thomas Telford's 1801 proposal for a huge cast iron arch.

This is all interesting, but the story of Tower Bridge really began in the 1870s. London Bridge was increasingly congested and a committee was established by the City Corporation to investigate the possibility of a new bridge or subway. Numerous schemes were developed, some by well known engineers such as Joseph Bazalgette and Rowland Mason Ordish, and Powell's book covers these well, including some great illustrations of what now look like quite absurd ideas.

The twin bascule solution was originally proposed by City Architect Horace Jones in 1878, and is shown in detailed original drawings included in the book. This was a drawbridge design, with ornate towers helping to support an arch from which, in turn, the bascules were slung.

The involvement of engineer John Wolfe Barry in the project from 1884 led to the change to a design essentially similar to what was eventually built, with suspended side spans anchored to two elevated, horizontal tie girders, which eliminated the risk of the original arch being struck by tall ships and also served as walkways.

Powell's book does well to cover the many key individuals who were responsible for the bridge's design and construction. These include John Jackson, the lead contractor; William Arrol, whose firm fabricated the steelwork (most of it hidden behind the tower cladding); and William Armstrong, whose firm supplied the hydraulic operating machinery.

Horace Jones died in 1887, a year after the laying of the bridge's foundation stone, and the task of preparing the architectural detail drawings fell to George Daniel Stevenson, who later established his own architectural practice. Several of Stevenson's beautiful drawings are reproduced in the book, along with a handful of engineering drawings and plans. I'd happily have seen more of these, but the book is judicious in its choices.

After describing the architecture, structural engineering and construction work, the book devotes a full chapter to the machinery and operation of the bridge, with more excellent photographs and diagrams. The engineering aspects are well-explained, and I think the level of detail given is about right for a lay-readership - informative without being too extensive.

A chapter towards the end of the book addresses Tower Bridge's life following construction and its status as an icon, although I think there was more that could have been said here (compare, for example, Peter Spearritt's book on Sydney Harbour Bridge). The Tower Bridge clone in Suzhou, China, doesn't even get a mention!

The final chapter discusses a few of the people involved in the bridge during its operational life, such as the various Bridge Masters, and although this is very welcome I think it would have been better to integrate these tales into the body of the book. There are also chapter notes, a bibliography and helpful index.

Overall, this is a genuinely excellent book about a bridge which certainly merits this level of in-depth attention. In addition to the historic images, there are many very high quality photographs of the bridge today, which make the book a joy to look through. It should certainly appeal to bridge enthusiasts, but more widely to readers interested in London, architecture and engineering.

Posted by The Happy Pontist at 6:18 PM No comments:

"Aqueducts and Viaducts of Britain" by Victoria Owens

This is the second of two books about bridges published this month from Amberley Books. I featured "Britain's Greatest Bridges" by Joseph Rogers in my last post.

"Aqueducts and Viaducts of Britain" by Victoria Owens is 96 pages long and well-supplied with recent colour photographs, plus a few older illustrations. The book focuses on two centuries from 1760 to 1960, a prolific period of bridge construction driven first by the canals, then railways, then roads and motorways. There are, of course, older structures which could be considered viaducts, but Owens notes that the very term 'viaduct' is a reasonably recent coinage, introduced by landscape designer Humphrey Repton in 1816.

If Rogers' book on Britain's greatest bridges necessarily skips along the surface of its subject without ever getting in too deep, Owens' book is the precise opposite, submerged in its topic from the first page (there is no introduction) and only occasionally pausing to return to the surface for breath.

Within the first three paragraphs the book dives straight into the tale of James Brindley's Barton Aqueduct, Britain's first navigable aqueduct. Owens is something of a Brindley specialist, so the start of the canal age is covered well, although disappointingly the Barton bridge's successor, the remarkable and unique Barton Swing Aqueduct is given only passing attention. In general, it's fair to say that the book is noticeably more thorough in its coverage for the early part of the period covered.

The first four chapters of the book are split equally between early aqueducts and viaducts, including structures such as the Kelvin Aqueduct, Lune Aqueduct, Stanley Ferry Aqueduct, Sankey Viaduct, London and Greenwich Railway etc. A fifth chapter tackles problems that the designers and builders encountered, such as how to create skew spans, prevent scour, and mollify recalcitrant landowners: quite a variety of challenges!

The sixth chapter addresses the use of timber and iron, with wooden structures such as Ouseburn Viaduct, Brunel's Cornish railway viaducts, and Barmouth Bridge. Metal viaducts include Tyneside's High Level Bridge, Crumlin Viaduct, and Bennerley Viaduct. As in the earlier sections, many of the structures featured are less well known than those I have highlighted here.

Chapter 7 is the odd-one-out: a "case study" of the viaducts of the Settle to Carlisle Railway, masonry viaducts built in the 1870s, some in spectacular countryside. The best known structure is the Ribblehead Viaduct. Chapter 8 discusses the estuarial crossings of the Solway, Tay and Forth, while the final chapter features a very much abbreviated range of more recent concrete and steel bridges. The book concludes with a helpful bibliography and index.

Generally, the book is well written, well informed, and contained much that I did not already know. It tackles the history of each bridge effectively, and is confident in its description of architectural and engineering aspects. However, it jumps from bridge to bridge too rapidly, and would have benefited from putting its facts into a wider context. It's a little breathless at times.

It's probably not a book for the very general reader, but one for bridge enthusiasts, or those with a specific interest in canals, railways, and transport architecture.

Posted by The Happy Pontist at 7:18 PM No comments:

Two books published this month from Amberley Books may be of interest to readers: "Aqueducts and Viaducts of Britain" by Victoria Owens and "Britain's Greatest Bridges" by Joseph Rogers. Both books are 96 pages long and well illustrated in colour. I'll cover the Rogers book in this post, and the Owens book next time.

I think it's best not to get hung up on the title of "Britain's Greatest Bridges", which begs questions from the outset. The book is set out in 40 chapters, each documenting a bridge ranging in date from the Tarr Steps up to the Queensferry Crossing. Many of the choices are shoo-ins: Royal Albert Bridge, Tower Bridge, Iron Bridge, Severn Bridge, Mathematical Bridge etc. But there are plenty of surprising absentees: Union Chain Bridge, Kylesku Bridge, Ballochmyle Viaduct, Pontcysyllte Aqueduct, Tyne Bridge, Grosvenor Bridge, Maidenhead Railway Bridge, Bideford Long Bridge, Glenfinnan Viaduct, Craigellachie Bridge - the list of aggrieved runners-up could be quite long. Just think of the book instead as "My Favourite British Bridges", and that's fine.

The book is weakest in the modern era. Do Itchen Bridge (span 125m) or Kingston Bridge (143m) really deserve to feature ahead of the mighty Orwell Bridge (190m)? None of the excellent concrete motorway bridges of the 1950s/1960s appear, and the selection of modern 'architectural bridges' is at best idiosyncratic (London Millennium Bridge, Salford Quays Lift Bridge, Scale Lane Swing Bridge, rather than Gateshead, Forthside, Castleford, Infinity, the Rolling Bridge etc). Some choices are a genuine surprise, most notably the Steampipe Bridge at the University of Birmingham.

Rogers is no bridge expert, but has clearly spent plenty of time researching his subject. It's a book for the non-specialist, someone with an interest in transport, history or architecture. A general reader should come away with an understanding of quite what a splendid set of structures this country can boast. From that perspective, I think the willingness to depart from the obvious is a positive feature. 96 pages sounds short, but I thought it was a reasonable length and appropriate to the subject matter.

The illustrations are well chosen, supplementing photographs with drawings, old postcards and other historic images, although some of the photographs are gloomy, lack contrast and have not reproduced well.

For the specialist, it's not a book I can especially recommend: there are no references or index, and several attempts to explain the structural engineering of specific bridges are clumsy and in some cases a little misleading. Indeed, generally the bridge is strong on historical and geographical anecdote, but weak on engineering and architecture. No editor is credited, and that shows in the sometimes clunky prose and occasional grammatical errors.

On balance, then, this is not one of "Britain's Greatest Books about Bridges", and definitely one for the general reader rather than a dyed-in-the-wool bridges buff.
Posted by The Happy Pontist at 10:32 PM No comments: