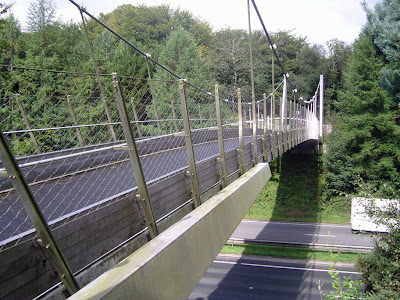 This little suspension footbridge at Halgavor, near Bodmin in Cornwall, was on my must-visit list.

It carries a footpath and bridleway 47m across the A30 highway, poking out shyly from between the trees on either side. Driving under it, you can see the main span but not the support towers, while from above, it is similarly difficult to find a viewpoint taking in the entire bridge. This sense of modesty is unusual for such an adventurous little structure.

Halgavor footbridge was designed by Wilkinson Eyre and Flint and Neill for the Highways Agency, opening in 2001, and even at first sight is an unusual structure for that body. At this span, some form of metal truss would have been a straightforward solution, and probably with lower initial cost than what was built. 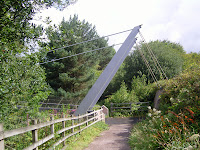 It's a reasonably conventional suspension bridge, although the towers are tilted back from the span (see picture, click on any picture for the full size version), and the parapet posts arranged radially for visual effect. However, its dainty appearance hides its innovative nature.
The steel towers are the only part of the bridge likely to require substantial maintenance, in the form of repainting. The main suspension cables are in galvanised steel. The hanger cables, parapet posts, and parapet infill mesh are all in stainless steel, helping to minimise the need for future maintenance over the highway. The lower part of the parapets is in timber boarding, to meet bridleway requirements. 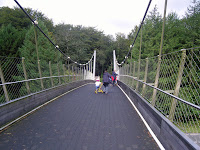 The deck is the feature that has got the bridge the most attention, being constructed largely out of glass-reinforced plastic (GRP). With the GRP resin formulated to protect against ultra-violet attack, it should therefore require little or no maintenance, minimising future disruption to the highway. It's paved in rubber blocks made from shredded, recycled rubber, which provide a happier surface for horses' hooves and also contribute to the structure's damping.
The upper-layer of the deck is a double-skinned sandwich plate, providing the necessary stiffness to resist out-of-plane pedestrian loading. Channel sections form the sides, and a series of diaphragms and a lower plate are assembled into a box-girder form. It was reportedly the first GRP bridge built in the UK by a publicly-funded body, and as such, considerable innovation had to go into its design and construction. 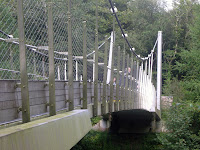 The difficulty with bridges like this is putting them in a context where the innovation becomes repeatable and more widely applicable. In the ten years since Halgavor Footbridge was opened, very few comparable structures have been built in the UK, and generally of much less aesthetic value. Most of the GRP and CFRP structural systems available are based around automated fabrication (such as pultruded sections). Elaborate lay-up and assembly appear less common, and such examples as I have seen are very ugly.
I'm reminded of the Lockmeadow Footbridge, by the same design team, another lightweight, aesthetically sensitive structure where the more innovative elements (an interlocking aluminium deck, and GRP parapet posts) have failed to see any wider adoption.
Visually, I think there is much to admire at Halgavor. The parapets are particularly good, especially with the combination of timber and stainless steel, but mainly for the attention paid to keeping it simple and transparent. The suspension arrangement is more attractive than the use of vertical hangers, at least in this setting.
There are peculiar arms which extend from the abutments to cradle the deck, and I struggled to work out what they were for. According to a technical paper about the bridge, they are there to soften the disjuncture in stiffness between the suspended deck and its connection with the abutments, which is fixed (thermal movement is addressed by vertical flexing of the lightly-arched deck). As in a stress-ribbon bridge, the bending moment at the support is otherwise too high for a slender deck such as this to accommodate.
Further information: