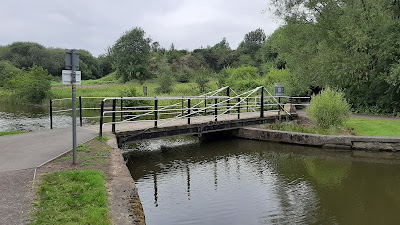 I crossed this bridge en route to its much bigger and better known neighbour, the Sankey Viaduct. It is a rod-stayed pedestrian bridge spanning the Sankey Canal, and although there may have been several bridges like this in the canal's heyday, I believe this is the only one of this type that is left.

The Canal dates all the way back to 1757, but Historic England suggest that the Grade II Listed bridge dates from around 1857. The Listing states that the turning gear and pivot remain in place, although clearly the bridge is no longer operational, and the canal reaches a dead-end a short distance to the north of here.

If the 1857 date is correct, it must be one of the oldest surviving stayed bridges in England (there are certainly older examples in Scotland). It's not clear how much of the bridge is original - Historic England date the parapets to the 20th century, and there are turnbuckles in the main rods which are clearly an alteration.

The bridge is currently painted black and white but was previously painted green, as can be seen in photos at the Towpath Talk website, and on Wikimedia Commons, so the repainting is fairly recent. 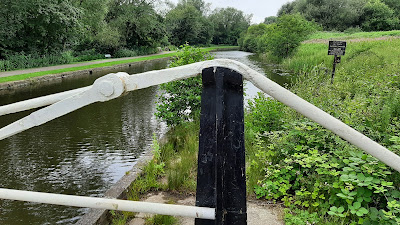 The bridge's most unusual feature is the way in which the main span stays split into two. The stays are flattened locally to allow a pin to pass through. Combined with the bending of the rod over the narrow width of the cast iron posts, this is not an arrangement which could carry substantial loads, it would too easily be prone to fracture. 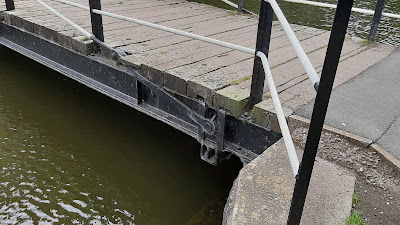 At deck level, there is a short linking piece connecting the main stay to the floor beams, which don't look original to me. 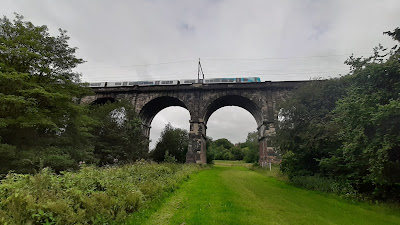 Time for a couple more "Merseyside" bridges (using the regional term in a broad sense, before the pedants write in, again).

Completed in 1830, Sankey Viaduct has been described as "the earliest major railway viaduct in the world". Protected by Grade I Listed Building status since 1966, it still carries trains today.

The nine-arch viaduct was built as part of George Stephenson's Liverpool and Manchester Railway, to carry the line over a valley containing both the Sankey Brook and the Sankey Canal. The latter is now defunct, and was infilled at this location in 2002, so the viaduct now spans the Brook and a public footpath.

The viaduct is reported to have been designed by Stephenson's assistant Thomas Longridge Gooch, with William Allcard acting as resident engineer. Both men had worked with Stephenson for several years, and although Gooch is often described as Stephenson's draughtsman, he would in modern terms be called an engineer. Some sources cite Allcard as the main designer.

In 1825, Stephenson had been temporarily displaced as the railway's engineer, and John and George Rennie proposed a seven-arch viaduct 273 yards long. Once reappointed, Stephenson initially put forward a 20-arch brick viaduct, which was rejected by the railway company's directors. Describing his first design, Stephenson wrote to his son, Robert:


I have drawen a plan on the gothick principal there will be 20 arches of 40 feet span it will be quite a novel[ty] in England as there will be a flat arch sprung between the centre of the tops of the gothick and so on it has a fine appearance in the plans.

The Viaduct was only necessary at all because the Sankey Brook Navigation Company refused any obstruction to tall sailboats passing along their canal. Compare this old image of the viaduct with how the valley looks today. 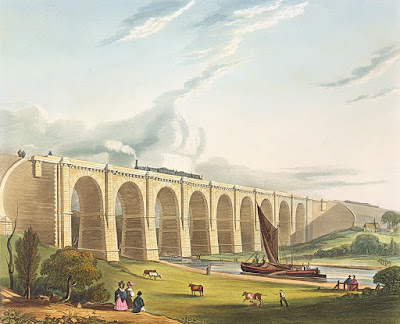 The viaduct is a brick structure with sandstone facing on the two elevations. The piers are generously tapered and robust in appearance. Below ground, they sit on sandstone foundation blocks, which are in turn supported on driven timber piles.

The arches are semi-circular, each spanning 15.2m (50 ft). The keystone is prominent, projecting not just below the elevation, but below the entire width of the arch barrel. The underside of the arch is substantially covered in calcite staining, and in need of at least a clean if not more thorough refurbishment.

New overhead electrification portals were added in 2015; this seems to have been done with some sensitivity, choosing the positions carefully and only with small visible protrusions above the cornice line.

Looking up at the spandrel walls, occasional openings can be seen on one or other side of the central pilaster. I wondered whether these indicated the bridge to be of hollow-spandrel construction, with a series of internal spandrel walls. I found the planning consent application for the overhead electrification online, showing this guess to be correct, see the drawing extract below. 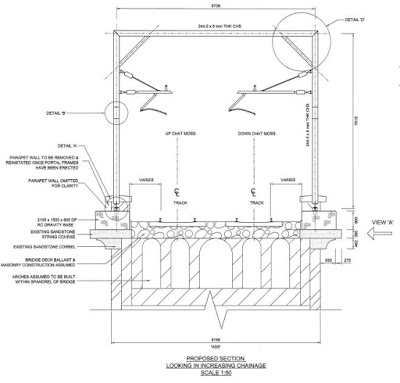 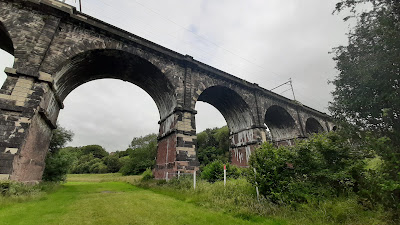 Posted by The Happy Pontist at 7:41 PM No comments:

This wasn't a story I was aware of until I saw something recently posted on the Bridgehunter's Chronicles blog.

The Pont des Trous (translation: "bridge of holes") in Tournai was a medieval structure spanning the Scheldt River. Three arches, built at the end of the thirteenth century, connected two defensive towers, part of a historic city wall system. According to one report, this was one of only three remaining 13th century defensive bridges in the world (although ... read on!)


And here is how it looked on 14th August this year, following major demolition work:


If you spot that the towers look different in the two photos, that's because the photos are taken from different sides of the bridge: the curved tower faces were apparently on the outside of the city walls, to better deflect cannon-shot.

After much debate, the arches have been demolished in the name of progress. Apparently, the 1500-tonne vessels that could pass through the central arch are not enough, so the bridge had to make way to allow 2000-tonne vessels to pass.

Demolition of such a historic structure seems quite suprising, even with the stated justification of improving the local economy. There have been a petition against the proposal, and a Facebook protest group.

However, the structure that has been destroyed was not actually the original 14th century bridge, shown here in an old illustration with three equal gothic arches and a roof covering.

The roof was removed and some other alterations were made in the 19th century.

The bridge was then destroyed by the British during the second world war. This image showing the damage to the medieval bridge dates from circa 1940:

When the bridge was rebuilt, it was essentially entirely erased and then reconstructed to some extent in reinforced concrete with a masonry facing - the bridge that has now been destroyed was essentially a fake, although many visitors would never realise this. The central arch was raised and widened enlarged at this time.

There have been various plans put forward to replace the demolished bridge with a modern structure.

Here is a proposal from Bureau Greisch and ANMA architects, a stainless steel mesh, a ghost of the bridge's former self in far too many senses: 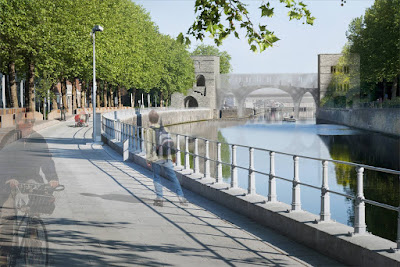 A stone version of the same idea was preferred in a consultation with residents (although the consultation didn't include the possibility of retaining the existing structure).

This alternative proposal is from architect Olivier Bastin, a more skeletal reconstruction. It feels more like a parody of a bridge, than any meaningful tribute to what was there before. 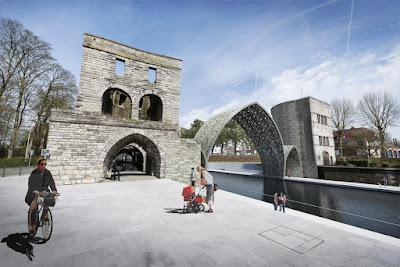 Michel Wiseur's alternative is the best of this sorry bunch, displaying clearly the site's history rather than replacing it with something of entirely different dimensions or materials: 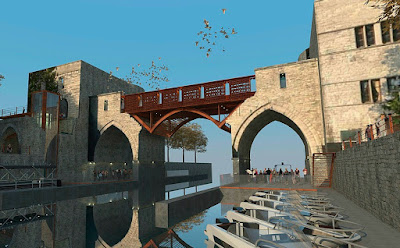 I gather that all these proposals have now fallen by the wayside, and the local authorities have stated they intend to rebuild the bridge (on another site?), stone-by-stone. If you watch the video of its demolition, you may wonder quite how that will actually happen.

My first thought on hearing about this whole story was that it was really quite appalling. Heritage can either be preserved or lost, and it can only be lost once. Once lost no Disney-like confection can replace it. However, here is a bridge that can apparently be lost twice, and the bridge that has been destroyed is not what it may have seemed.

So is it really such a loss after all? It is perhaps more significant as an element of civic identity than as a piece of real heritage. As with much nostalgia, the sense of loss is for a representation of the past that was never real or authentic anyway.
Posted by The Happy Pontist at 11:32 PM No comments: 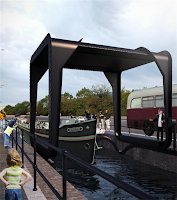 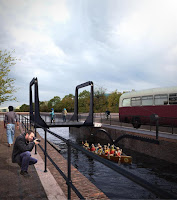 It's a very imaginative idea, and I wish them well.
Posted by The Happy Pontist at 7:20 PM No comments: