Ok, time for a few bridges from the south-west of England, all in the counties of Devon or Cornwall, or in some cases both. 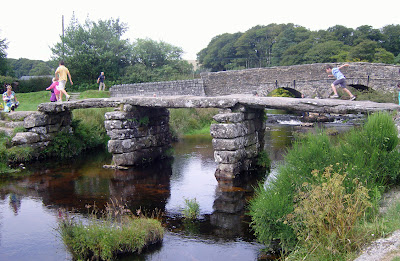 The first, Postbridge, is a clapper bridge spanning the East Dart near Princetown. It's believed to date to the 13th century, and is a Grade II* Listed Building and Scheduled Ancient Monument.

The granite  slabs each span about 3m, and are reported to weigh up to 8 tons each. 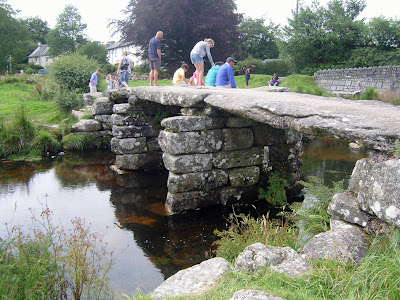 The bridge's proximity to the roadway means this is one of the most visited of Britain's clapper bridges, as can be seen in the photographs. Tourists or not, it retains a timeless quality which belies the fact that it has been repaired and rebuilt on more than one occasion, most recently circa 1970, when the slabs were bedded on a resin mortar to eliminate movement.

I'd have preferred to have seen the bridge with fewer visitors, it seems almost uncouth for something so primitive to be so well-used.

As a designer, I wonder why it is acceptable to have no handrail on an ancient monument but one would be demanded on an equivalent bridge built today. Surely the risk of falling off is the same in either case? Does protection of heritage have more importance than the risk of injury, or should we simply recognise that the risk of injury is so low as to be an irrelevance, whether many centuries ago or today?