Here are a few news links that you have probably already seen. I'm travelling over the Christmas period, so it will probably be January when I finish off my reports on the IABSE study tour of north-east England.

New Thames footbridge gets planning
I really dislike this so-called Golden Jubilee bridge, which is proposed to cross the Thames between Battersea and Chelsea Harbour in London. The proposed span arrangement, with a short middle span flanked by two larger spans, with correspondingly larger support arches, just seems to have a really awkward rhythm to it. Although the bridge has now won planning consent, it still appears to have no funding. Incidentally, if you don't have a BDonline subscription, you can read their news stories by simply copying-and-pasting their headline into Google, then following the link from there: this bypasses the subscription protection.

£60m boost for Thomas Heatherwick's garden bridge
The Golden Jubilee Bridge is a ridiculous enough proposal, but the Garden Bridge is an absolute disgrace, an absolute eyesore where money is no object if it serves to boost the vanity of all involved. The total project budget is £150m, which is absurd for a bridge which is so utterly unnecessary.

Striking but useless… just like Boris
It seems I am not alone in this opinion. "It has just the right combination of whimsicality and instant-wow theme-park tackiness to make it a likely Boris project."

Shortlist announced for Hisingsbron in Gothenburg
So far as I can tell using Google Translate, five proposals out of 24 submissions have been shortlisted in this competition to design a new moveable bridge. The finalists are Snøhetta / WSP, Zaha Hadid, Tyréns / Beam / Schlaich Bergermann, Dissing + Weitling / Lenonhardt Andrä, and Wilkinson Eyre / Ramboll. That's a mighty impressive roll call of bridge architecture names, along with one or two less so. All five shortlisted entries are available online, where you can play guess-the-architect. All I can say is that three out of the five submissions are quite horrible, and you really have to wonder what the participants were thinking.

Beautiful bridge planned for China's Hunan province evokes knots, Möbius strips
This depressingly awful bridge proposal has been all over the architecture blogs, but few have managed such an inappropriate title. Beautiful? In the eye of the beholder, perhaps. If they are blind.

I told you so, St. Patrick’s Island Bridge
Following flood damage during construction earlier this year, parts of the RFR / Halsall designed footbridge had to be disassembled, setting back the date for the bridge's opening. Tallbridgeguy takes the opportunity to say "I told you so".
Posted by The Happy Pontist at 11:38 PM 4 comments:

The four shortlisted entries to the RIBA Salford Meadows footbridge design competition have been made available online, and also as part of a public exhibition. Comments are invited from the public, with an online deadline of 6th December.

I previously showed some of the shortlisted entries here, as well as a selection of the many unsuccessful entries. I gave some more detailed comments on the contest back in June.

I'm a bit pushed for time right now, but if I get a moment, I'll post some more images and thoughts here.
Posted by The Happy Pontist at 9:46 AM No comments: 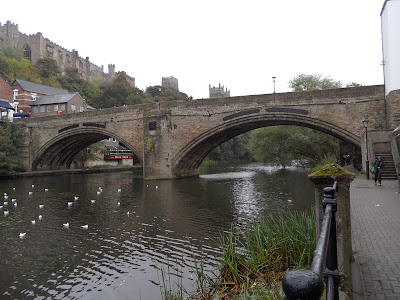 Framwellgate Bridge pre-dates the nearby Prebends Bridge in Durham, but is a significantly more attractive and impressive structure. 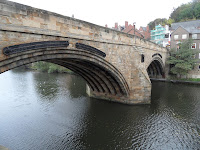 A bridge was built at this site in the early 12th century, by Bishop Ralph Flambard. It was protected by a gateway and tower, until destroyed in a flood in 1400. The replacement bridge consisted of two segmental arched river spans, and one much shorter land span. The land span is no longer visible, although it may be hidden by later buildings. It can be seen on a painting by Thomas Girtin, and if it does still exist, it may be a survivor from the original bridge. 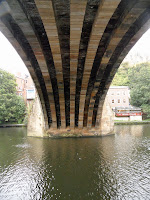 The river spans are ribbed arches, originally with five ribs, and later widened to seven. As with its predecessor, it was originally protected by a gatehouse, removed in 1760 because they hindered traffic.

The shallow spans are very attractively proportioned. They are separated by triangular breakwaters. I think the slight recessing of the arch facing stones is a large part of the attraction, and spandrel tie bars have been added in a way which complements rather than detracts from the bridge's appeal.

This was pretty much the last bridge we visited on the first day of our IABSE study tour. We did visit the Gateshead Millennium Bridge in te evening, but I'll cover that when I run through all the Tyneside bridges that we visted on our second day.

Posted by The Happy Pontist at 9:00 PM No comments:

The centre of Durham is dominated by a large loop in the River Wear, which passes around the peninsula on which sit both Durham Castle and Durham Cathedral. While this may have been a highly defensible site when the Castle was built in the 11th Century, it must have proven an increasing constraint on travel as the centuries wore on. 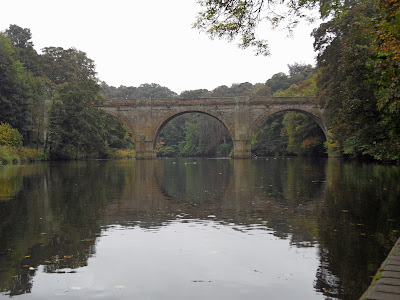 Prebends Bridge was one of three mediaeval bridges to be built which spanned the river. Originally, it was the site of a ferry. In 1574, this was replaced by a timber bridge built on stone piers, although that was swept away in the floods of 1771. The present bridge was completed in 1778, funded by the Cathedral and designed by George Nicholson. 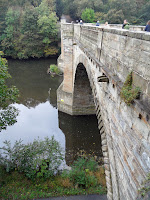 The bridge has three semicircular stone arches. The parapet is generally solid, but opened with balustrades near the crown of each arch. There are triangular cutwaters, with a semi-hexagonal geometry above the base. The face of the arch ring is "dentilated", and you can see waterspouts on the elevations which assist with drainage.

These are an unusual feature. Poor drainage is a common feature in old masonry bridges, but the details of this bridge seem better thought out than most. Viewed from above, you can see a succession of scalloped humps in the road, assisting water in draining towards the waterspouts. I can't remember seeing this feature anywhere else.

Despite this, the bridge has suffered from masonry deterioration, and it was closed to traffic entirely in 2011.

It's not the prettiest of Durham's bridges. The regular procession of arches seems stilted, and I think it would have looked better if the open balustrading was continued over more of its length. I imagine it looks much more attractive on a calm and sunny day, when it reflects better in the water.

Posted by The Happy Pontist at 3:53 PM No comments: