In 1995, the London Docklands Development Corporation held a competition to design a 200m long footbridge across the Royal Victoria Dock, connecting Silvertown on the south to the ExCel exhibition centre on the north. Central to the challenge was the need to maintain a substantial clearance to tall-masted ships, with the result that the bridge had to be at least 15m up in the air to allow for normal use. As a result, all the competition submissions are for a relatively unusual configuration of bridge.

The competition was won by Techniker and Lifschutz Davidson, with an innovative and undoubtedly spectacular 128m span "inverted Fink truss" bridge. Their design featured a 40-person transporter gondola at low level, so that pedestrians could cross the waterway without first having to use a lift or the stairs. Sadly for fans of transporter bridges, this element has never been installed, as foot traffic just doesn't justify it. 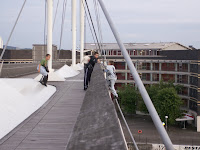 I greatly admire the attempt to rehabilitate an archaic railway bridge design (technically it's not really an inverted Fink truss as several diagonal ties are omitted - it's almost more of a variant cable-stayed bridge), and in elevation (see images below), the superstructure design is a very striking form. The supports are far less successful, especially the very monolithic enclosed stair and lift towers, and overall the scale is perhaps too much, it just towers too much above the surroundings.
The deck's extreme slenderness is also only maintained at the cost of somewhat unsightly bulges above walkway level, apparent on the photograph (above right), which also shows the use of external cables near the parapets for, err, unauthorised maintenance access.
Of the other competition entries, I find the Robert Benaim one somewhat baffling as it is not at height and is unclear how ships are allowed for - perhaps it's from an unrelated competition! The curved tie to which most of the stays are attached looks pretty but structurally all it adds is a huge problem if cables ever need to be replaced.
The Cezary Bednarski design seems the most successful at resolving the difficult end towers, something the Price & Myers proposal does very poorly. I like the Richard Horden submission, especially how it begs the question of whether an opening span would be a much better approach for a waterway which I imagine only rarely accommodates high-masted vessels.
I've tried to find images of the unsuccessful entries on the internet, but so far only found four. I don't know if there were more. If anyone can point out others to me, I'll update this post in the future.
As ever, links are only given if there's more information on a design on a firm's website. Click the images for a full-size version.
Winner
Techniker / Lifschutz Davidson 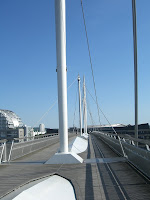 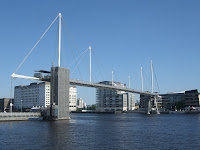 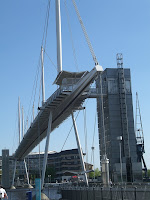 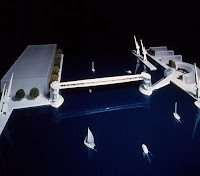 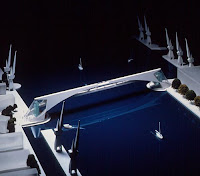 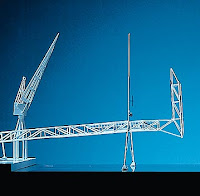 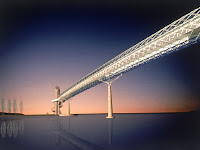