Manchester City Football Club (MCFC) have recently submitted a planning application for a new sports training complex, across the road from their existing City of Manchester stadium. The scheme involves a dedicated mini-stadium, indoor and outdoor training pitches, and supporting buildings. It's probably the most ambitious football construction project in the UK at present. 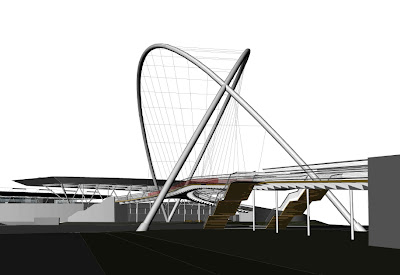 The new facilities will be linked across a main road to the football stadium by a new landmark pedestrian bridge. The structural designer for the project generally is Capita Symonds, and their name is on the draft technical approval document for the bridge, but judging from the names on the planning drawings, I think this is actually a Schlaich Bergermann design. It looks like it could be their first bridge to be built in Britain, with their closest previous attempt failing to get off the ground.

The present design is for a 90m span tubular arch bridge, with two inclined arches. The arches have a common springing at one end, where the bridge deck diverges in a Y-shape, and twin springings at the opposite end, where there is only the single straight deck. The tubes therefore intersect in one place above the deck, giving a plan arrangement very like the Christian ichthys symbol. I wonder whether the football club's owners, the Abu Dhabi United Group, have spotted this.

The deck is a minimum 5m wide trapezoidal steel box girder with steel rib cantilevers supporting a concrete deck slab. The parapets are in stainless steel, with horizontal tensioned rods as the infill. The deck is suspended on spiral strand rope hangers, which also run between and stabilise the main arch members.

The asymmetry of the arrangement will lead to some asymmetry of loading on the arch, but I would guess not enough to be of any significance. More interestingly, the angle of the hangers will be asymmetrical, which should lead to an interesting visual effect, with the hangers shallower and hence "opening out" as you walk away from the main football stadium, rather than towards it. 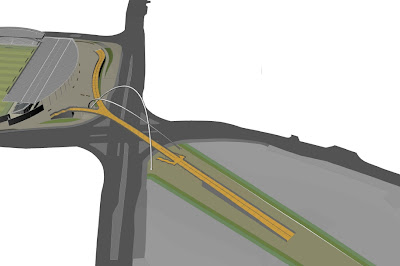 As ever, click on any image for a full-size version. All images have been taken from the planning submission documents. The images on the Manchester City website give a wider impression of the context for the new footbridge.
Posted by The Happy Pontist at 11:12 PM