Deptford Creek - a tale of two footbridges
Two footbridge proposals in London. The tilt-and-twist one seems unlikely ever to be built.

Three accolades awarded for Wilkinson Eyre-designed Peace Bridge in one week
And they won't be the last, surely.

Making peace with the bridge: Calgary's most controversial span is winning over its critics
A year after opening, Calgarians are better reconciled to that other Peace Bridge, the Calatrava one.

The Mystery of the Missing Suspension Bridges of Paris

It's not really a mystery of course, but this blog features some great images of historic suspension bridges in Paris, and tells a good story. Suspension bridge construction took a nose-dive throughout France following the 1850 collapse of Chaley and Bordillon's Basse-Chaîne Bridge, attributed to corrosion in the main cable anchorages, and a tale with resonance for modern engineers (e.g. the 1990s moratorium on post-tensioned bridges in Britain).

Flood-hit iconic bridge is restored to its full glory
The ancient Tarr Steps rebuilt for less than £10,000. A bargain by any measure.

'A bridge too low': Chinese town planners build flyover that pedestrians have to duck to walk beneath
Built with a headroom of only 1.3m, there are some great pictures here. The Daily Mail is fast becoming the go-to destination for lovers of exotic bridge news.

Inca jewellery and Peruvian minery-inspired bridge in development by OOIIO Architecture
New bridge in Lima is to be a cross between a starfish and a piñata. Hopefully it will survive a good poke with a sharp stick, although the images don't fill me with confidence.

Twin Sails bridge shortlisted for architectural award
"A bridge that is called a Twin Sales Bridge and when it blows a gale of wind has problems because the sails cannot cope with the wind force. How on earth they can recommend that for an architectural award is beyond me", says grumpy old man.

Posted by The Happy Pontist at 9:27 PM No comments: Links to this post

There hasn't been a major bridge design competition in the UK for a good while now, so last week's announcement of a contest to design a £30m pedestrian crossing of London's River Thames will likely have seen a mass stampede of the country's bridge design teams rushing to line up partnerships in readiness. 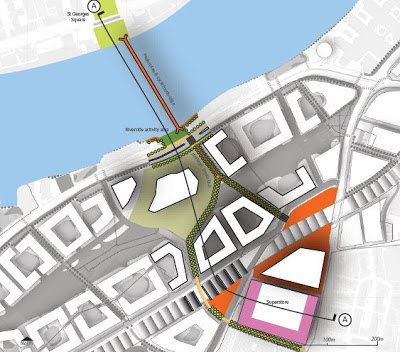 The bridge is a proposal by the Nine Elms Partnership, to connect the Nine Elms area south of the river with Pimlico on the north bank. The Nine Elms area is scheduled for major redevelopment, and a new footbridge would cut nearly a mile off the route via the nearest existing foot crossing, Vauxhall Bridge, which lies to the east. To the west, the nearest crossing is Chelsea Bridge. In addition to the bridge's other benefits, it will allow the occupants of the new American embassy at Nine Elms to minimise the amount of time they actually have to spend south of the river, a miserable happenstance notoriously bemoaned by London's cab drivers. 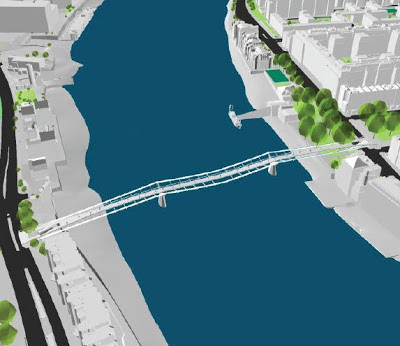 At this stage, little is known of the scheme other than the headline budget (one presumably set simply by taking the cost of London's £23m Millennium Bridge and adding on a few bob for inflation), the likely bridge alignment, and that the contest will be properly launched in late 2013. The scheme is being promoted by Wandsworth Council and presumably their fellow members of the Nine Elms Partnership. There are a few initial images available in a planning document, which I've pilfered for this post (click any image to see it full size).

The naysayers have already planted a stake in the ground. Last August, London's Evening Standard newspaper managed to dredge up at least two locals who would offer a quote opposing the plans.

This isn't the only current scheme for a new footbridge in this corner of London. Roughly two miles further west, there is a proposal for a £22m span, connecting Chelsea Harbour on the north bank to Lombard Road on the south bank, close to Cremorne Railway Bridge. Images of this proposal were made available in November last year (see video below), and it has been submitted for planning consent by designers One-World Design (Expedition Engineering helped develop the proposals). The planning committee is due to consider it in April.

This one has no funding in place and has been dreamed up by the designer rather than the local authority. They hope to find a private sponsor to pay for it. A bridge had been considered at the same site in 2003/4 to offer a good ratio of benefit to cost, but had failed to progress then due to lack of funding. I predict a similar fate this time around.

Posted by The Happy Pontist at 9:27 PM No comments: Links to this post

As with my last post, this post is just a collection of photos of one of London's most expensive pedestrian bridges, a few angles and details that caught my eye last time I visited it. For a more thorough discussion (and some photos which give a better idea of the bridge's overall layout), see my post from June 2010. 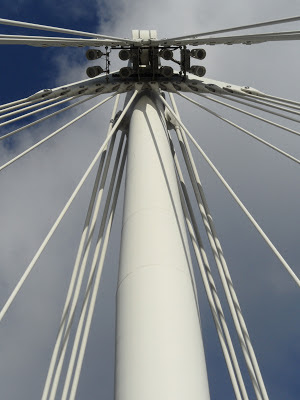 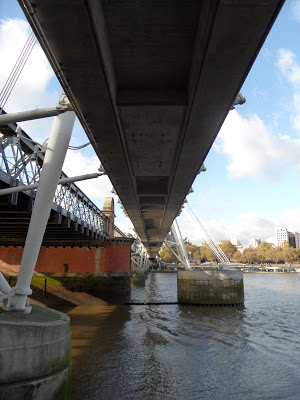 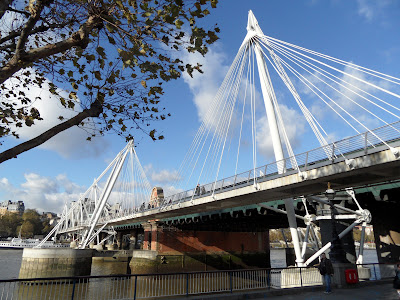 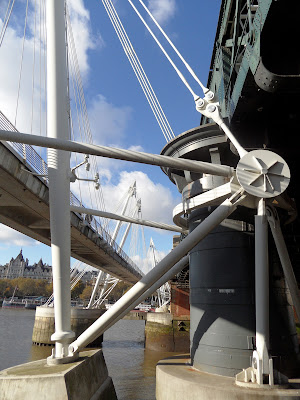 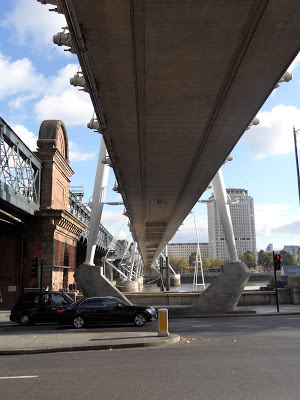 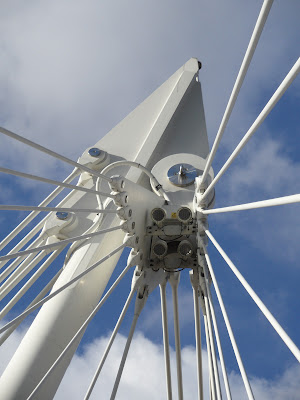 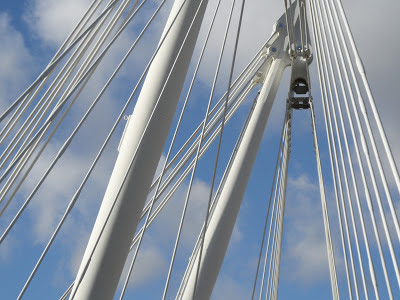 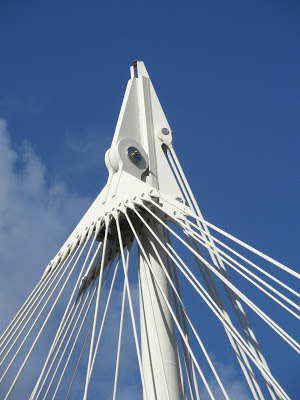 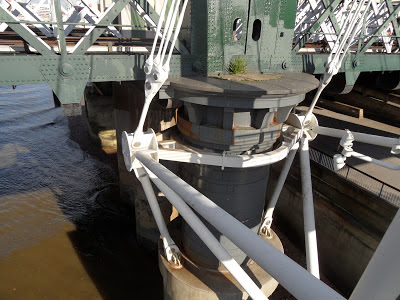 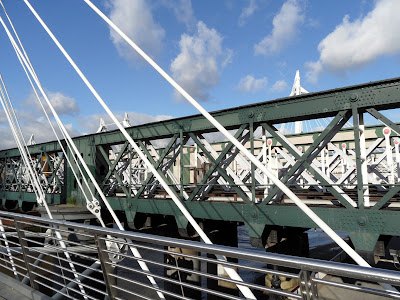 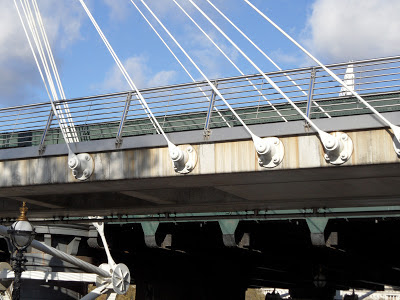 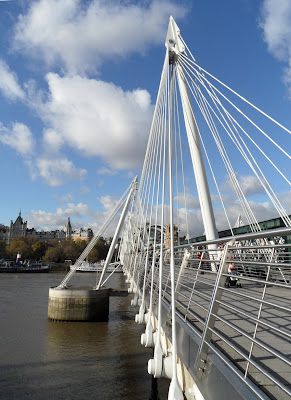 Posted by The Happy Pontist at 12:42 PM 2 comments: Links to this post

I previously posted about London's Millennium Bridge in June 2010. I took a few more photos on a more recent visit, and thought I would share them here. They are mainly of specific bridge details, not an attempt to portray the bridge as a whole. 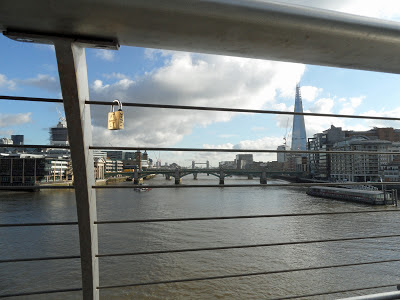 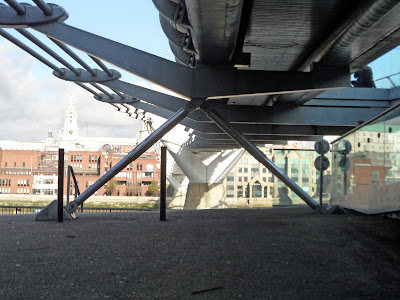 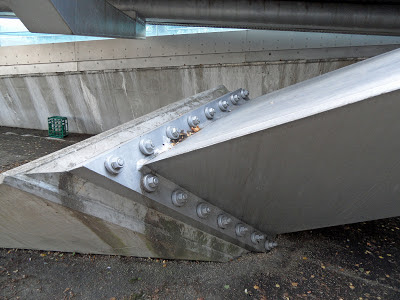 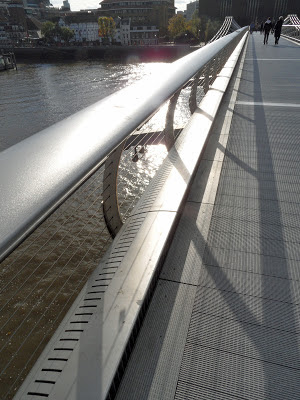 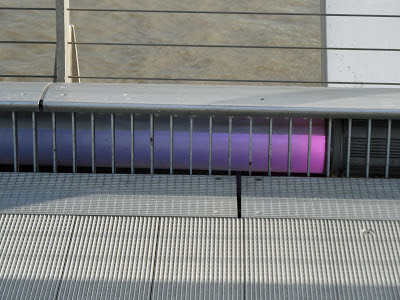 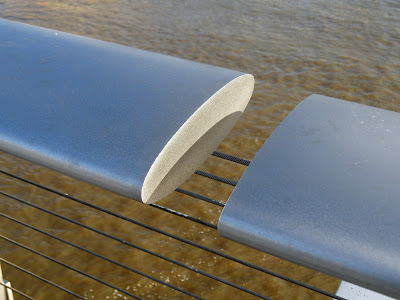 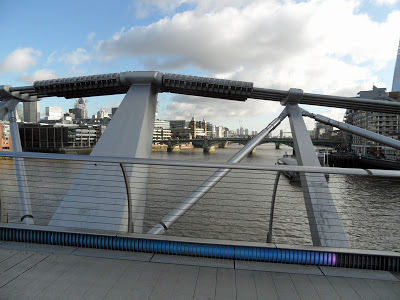 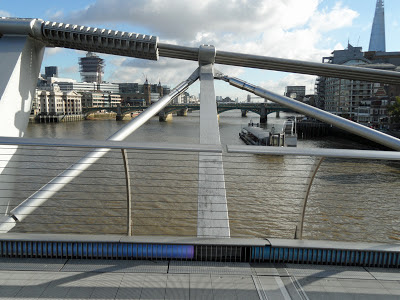 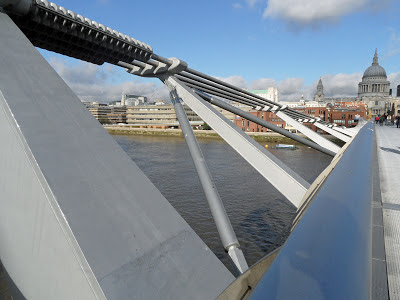 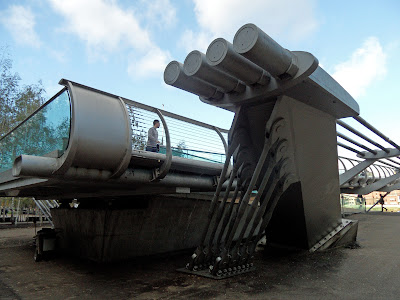 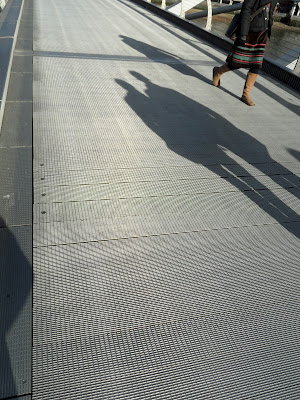 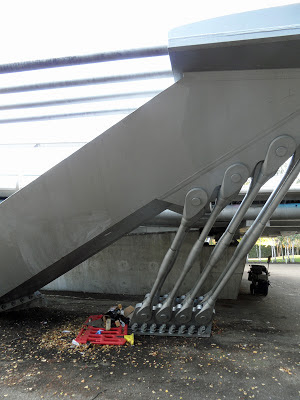 Posted by The Happy Pontist at 11:38 PM No comments: Links to this post

So, what has being going on in the world of bridges news since I last did a round up? Well, let's kick off with four bridges that have appeared on the ArchDaily website ...

Phyllis J. Tilley Memorial Bridge / Rosales + Partners Architects
Oh, now this is more like it. A really elegant little arch-supported stress ribbon bridge, in Texas. I wonder who the engineer is? Let's read the article. Er. Um. No engineer, apparently (par for the course for ArchDaily). I know, let's look up the datasheet on the architect's website, I'm sure they will credit their collaborator. Umm, no. Hey, maybe there was no engineer! Wait, here's an article about the bridge by the American Society of Civil Engineers, this will tell me! Hmm. Architect says this, architect did this, architect did that. Yadda yadda. Oh wait, here it is right at the end: Schlaich Bergermann and Partners, with Freese and Nichols. Really now, did that have to be so difficult?

Hovenring, Circular Cycle Bridge / ipv Delft
At this point, I feel tempted never to link to the ignoramuses at ArchDaily ever again. But here's one more, for now.

Mystery of Yuma's swastika bridge explored
So, why does this concrete bridge in Arizona have forty swastikas adorning its sides?

$320,000 a year to maintain new River Torrens footbridge to Adelaide Oval
They're kidding, surely. For what and where it is, this AUS$40m footbridge seems amazingly expensive, as do the reported maintenance costs.

Council approves LRT bridge design
The council in question being Edmonton, Canada, who have opted for an extradosed solution for their new light rail bridge. I especially liked the comment from one councillor that it would be more expensive than alternatives "'cos Wikipedia sez so" (I paraphrase). "At that point, Coun. Dave Loken pretended to repeatedly stab himself in the forehead with his microphone."


Scotland to be cut free as closure of bridge that connects the UK announced
Great headline, thanks to Tallbridgeguy for spotting this story, although it's worth noting that the body of the story doesn't confirm that closure is proposed (for the Union Chain Bridge, Britain's oldest suspension bridge), just that there's no money for refurbishment. The comments at the article's end are particularly splendid.

This Beautiful Wooden Pedestrian Bridge Was Crowdfunded When The City Couldn’t Pay
Rotterdam footbridge paid for piece-by-piece. Perhaps someone should tell those looking after the Union Chain Bridge? It wouldn't be the first use of crowdfunding for a bridge in the UK, after all.

Binladen bridge could spark war
Proposed bridge between Egypt and Saudi Arabia criticised as tantamount to an act of war against Israel. While the article is largely nonsense, the serious point that bridges have often historically been built to facilitate military strategy is worth noting.

Egypt-Saudi bridge: Is the government sacrificing natural resources for short-term gains?
You could read this article and not even realise it's the same bridge, so different is the perspective. Here, concerns are reported over the lack of transparency regarding its environmental impact.

Campaign planned against Braemar footbridge
I featured this proposed bridge a couple of months ago. According to the BBC, it may not be supported by all locals. A blog post here gives the arguments against development in the Braemar area.

Bridges on the Aston-Sheffield-Leeds motorway
Excellent post at the Tallbridgeguy blog highlighting some innovative and very interesting concrete bridges on the M1 motorway. It's well worth following the link to Concrete Quarterly for photos of several more related bridges, as well as a link to an interview with Ron Brindle in a follow-up post. Great stuff.
Posted by The Happy Pontist at 10:54 PM 1 comment: Links to this post