Bellmouth Passage connects two docks together near the east end of Canary Wharf. Within the space of about 100m, there are no less than five opening bridges. 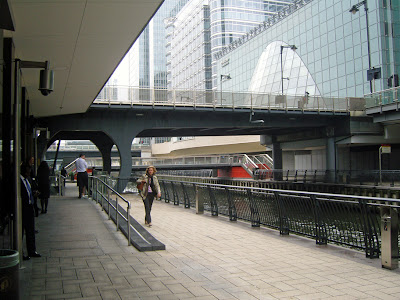 The first two were designed by Wilkinson Eyre with NRM Bobrowski, and each carry highway traffic above the waterway. The Passage isn't used much by waterborne vessels (especially right now, while West India Dock is occupied by the gargantuan construction site for a CrossRail station), but opening bridges are necessary for when waterway traffic returns. 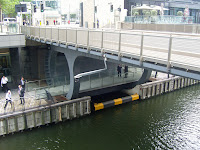 The bridge pictured is the northern of the two identical spans, and is of an unusual, if not unique, design.

It operates a little like a Scherzer rolling lift bridge, which is a bascule bridge which rolls back onto a curved girder, with a motion like a rocking chair. In the Scherzer design, the centre of rotation moves horizontally, whereas at Bellmouth Passage, it stays in one place. The rolling girder sits on support wheels, and a rack-and-pinion motor drives the bridge. 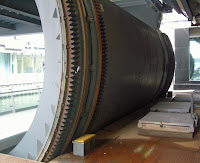 A more conventional bascule bridge wasn't adopted because there was no space for the conventional counterweight, with the client having specified that pedestrian access had to be maintained at dockside level. The brief also requested that there would be no visible structure above highway level. The chosen design solves the problem by positioning the bridge's pivot point midway between highway and lower footway, allowing the bridge to rotate about a "virtual fulcrum". The counterweight is incorporated within the elevation of the ring girder, as can be seen in the photograph to the left.

The only similar design I've ever seen was one of the losing proposals for the Foryd Harbour bridge design competition. 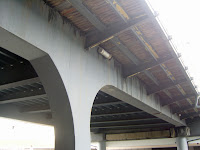 The bridge has two steel box girders supporting the deck, which are continuous with the ring girders. The highway deck is an orthotropically stiffened steel plate with a thin asphalt layer.

One feature of minor technical interest is that trief kerbs are deemed sufficient to keep vehicles on the road, allowing the use of lightweight mesh pedestrian parapets and timber footways. Unsurprisingly, this has led to seepage staining below, likely to be followed by paint loss and corrosion if road salts are being used on the highway. 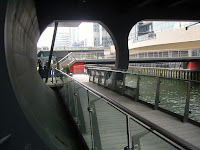 This is not a beautiful bridge, but it is an ingenious one, and the ring girder has an obvious appeal. It may have visually more successful if it could have been a full ring, rather than having the top truncated, but the experience of being able to walk through it is unique, and must be doubly so when the bridge actually operates.

Don't suppose you've got any youtube videos or the like illustrating the rolling bascule there in operation. Being from Victoria, and until last November, a city councillor who helped pull the trigger on our old bridge (and it really was beyond repair), I have still a keen interest in the operational elements of this design. It would be interesting to see it working, and particularly with the walkway in use through the gear wheel while the bridge is opening. Thanks. johnluton@shaw.ca