Okay, my summer holidays are now out of the way, so hopefully I can return to something like normal service.

First up, I've got a batch of bridges in London's Docklands that I visited earlier this year. These are not all marvels of the bridge design world, by any measure, and that's doubly true of this first structure.

The Limekiln Dock bridge spans what was once a busy inlet from the River Thames, connecting riverside footpaths. When the Docklands was re-developed, this area was re-populated with housing, and although there were once mooring rights along the Dock, I'm unclear whether these still exist. They certainly must have done in 1996, when the footbridge was completed, as it is a swing bridge.

The bridge, designed by YRM and Anthony Hunt Associates, spans 34m. It was built by Littlehampton Welding, and is an asymmetric cable-stay bridge in design, with the main span balanced by a large counterweight slung off the back of the mast. The entire assemblage pivots to open, requiring a large space on the quayside to be reserved for the counterweight and its support arms, so they can swing sideways without any risk of an accident. 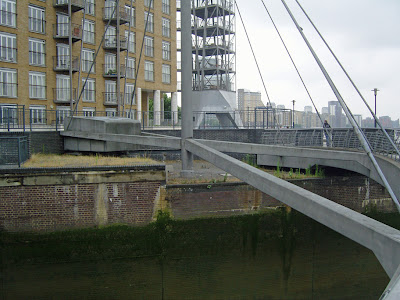 In the picture, you can see the arms supporting the counterweight, as well as two arms which support the deck, which is S-shaped in plan (the Bing maps link below gives the best general appreciation of the bridge layout - rotate the birdseye view to get an idea of the tidal range). There's the idea of an elegant bridge there, but the support arms and stiffness make it more like a hunchback on crutches. 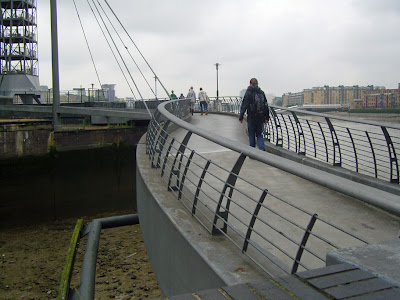 Indeed, I've seldom seen such a promising geometry ruined by such dismal detailing. There's almost nothing about the bridge which works well. The counterweight is clunky, and the loss of dockside space that results is criminal; the mast resembles a leaden drinking straw; an unfortunate fender arrangement below part of the deck detracts from what little style its flat-faced deck girder might ever have possessed; and it's all in a shade of grey which would give a pessimistic air even to an industrial estate, let alone blemishing the riverside next to some of the most expensive real estate in London.

Luckily, some of the other bridges I visited were a little better.

Posted by The Happy Pontist at 9:42 PM