10 essential bridges books: 6. The Work of Jörg Schlaich and his Team

I was keen to include in my list of 10 essential bridges books a monograph on a contemporary designer. You can fill a bookshop with monographs on contemporary architects, but you might struggle to fill a shelf with books on specialist bridge designers.

I had a few excellent candidates to choose from. There are at least three fine books on the work of Wilkinson Eyre (Bridging Art and Science

(2014)). I have several gorgeous volumes on the amazing Swiss engineer Jürg Conzett, including the beautiful early survey Structure as Space

(2004), which is a gorgeous, generously illustrated book about a singular and imaginative designer, but I decided that perhaps Ziesel just has too many unbuilt bridges in his oeuvre. 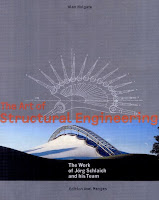 In the end, the choice was easy: Alan Holgate's The Art of Structural Engineering: The Work of Jörg Schlaich and his Team (Axel Menges, 294pp, 1997). I've previously reviewed a more recent book on Schlaich Bergermann und Partner, Licht Weit / Light Structures (2005), but Holgate's monograph still has much to recommend it.

Jörg Schlaich is undoubtedly one of Germany's most important 20th century structural engineers, and I think, my favourite. The firm that he helped establish has been responsible for a vast array of hugely innovative and fascinating structural engineering, much of which has its roots in Schlaich's experiences working with Fritz Leonhardt on projects such as the Munich Olympics cable net roof. Schlaich Bergermann's work is generally united by a strong sense of ethics: a constant striving for excellence, a desire to minimise use of materials, and frequently a desire for their work to be socially constructive, exemplified by Schlaich's designs for solar power plants. 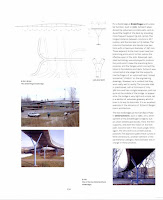 At the time of publication, Alan Holgate was a Professor at Monash University in Australia (now retired). He had previously authored Aesthetics of Built Form

(1986), the latter of which is perhaps the most essential and simultaneously least-read book ever written for structural engineering students. Unusually for an author of a coffee-table book about an engineer, Holgate wrote from a position of deep engagement - he understood the engineering but was also able to position it within a wider context. 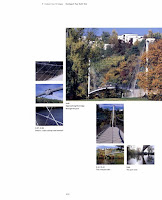 Much of The Work of Jörg Schlaich and his Team covers projects of seemingly peripheral interest to committed pontists: towers, shell and cable net structures, glass grid roofs, buildings and textile membranes. However, these projects provide numerous excellent illustrations of Schlaich's attention to detail, as well as explanations of how different designs were developed. Here, Holgate draws on the outcome of his own interviews with Schlaich, and does a splendid job of depicting the realities of the design process: often one of false starts and dead ends. 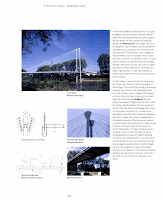 The chapters on bridges are wide ranging in coverage and scale, commencing with the gargantuan Hooghly Bridge and concluding with the intricate Kiel drawbridge. There are some amazing bridges featured. Personal favourites include the Obere Argen viaduct, with its under-deck cable propping system; elegant concepts for high-speed rail viaducts (later realised on the Erfurt - Leipzig/Halle line); and the delightful cable-net footbridge at Löwentor, Stuttgart. 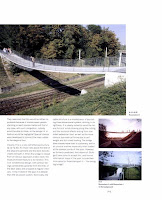 The book is very well illustrated, both with photographs and technical diagrams. These are particularly helpful in drawing attention to Schlaich Bergermann's excellent facility for structural detail, perhaps the area where the firm most excels. Combined with Holgate's detailed, patient and (where necessary) critical text, I came away from the book both informed and inspired.

That, in essence, is what makes me recommend this book. Here is a firm who most engineers can never hope to emulate, but who offer a constant reminder that hard work and intelligence point the way beyond the mundane.

Update 30 June 2015:
A commenter has drawn my attention to the fact that this book might be a little expensive secondhand to describe as "essential". It's certainly not worth paying hundreds of euros, pounds or dollars for, but it is still worth snapping up if you see it at a reasonable price.

I just looked this up on Amazon and it's coming out at $2500 new or $400 used. That's quite a collector's piece. I wonder if it's worth such high price or if I should rather spend that money on travelling to see the bridges in person ;)

Ha, yes it's definitely not worth that much! You can get it on Abebooks for about £260, but even that is way too much. Amazon.de has it for 115 euros right now, which is probably the absolute maximum that I'd pay. At these prices, Detail Engineering 1: Schlaich Bergermann und Partner may be a better option, although I've not read it myself: http://shop.detail.de/europe_not_eu_english/detail-books/detail-engineering-english-1/schlaich-bergermann-partner.html