It seems that bridge designers have been dissatisfied with the appearance of bridges for as long as bridges have been designed.

Certainly in the twentieth century, as the divide between the disciplines of architecture and engineering became clearer, it has been a persistent preoccupation. In 1912, Henry Grattan Tyrrell published Artistic Bridge Design: A Systematic Treatise on the Design of Modern Bridges According to Aesthetic Principles, opening his preface with the words: "A lack of artistic treatment is the greatest fault of American bridges". Tyrrell cited various reasons for poor visual quality of bridges, including price competition, lack of architects' involvement, legal hindrances, but top of his list was simply that engineers were not taught about aesthetics, and little or no literature was available to assist them. Tyrrell's book therefore extensively presented examples of good design, alongside clear guidance on what did and did not work well.

More recently and most notably, Fritz Leonhardt's Brücken (1982) offered a well illustrated survey of bridge design accompanied by a framework of ten key issues which together form a good basis by which designers can evaluate their own work.

Concern over a lack of attention to the visual aspects of bridge design has surfaced periodically in Britain. In 1964, the Ministry of Transport published The Appearance of Bridges

, setting out broad principles such as expression of function, relationship to context, proportion, simplicity etc, and suggesting how they could be applied to common types of highway bridge. In 1994, the MoT's successor, the Highways Agency, made aesthetic considerations mandatory in their standard BA41 (latest version BA41/98) The Design and Appearance of Bridges, supplemented with an excellent companion book The Appearance of Bridges and other Highway Structures

Frederick Gottemoeller has been prominent in these efforts to raise American bridge design standards, and his book Bridgescape (John Wiley and Sons, 276pp, 1998) is an excellent source of good sense. Gottemoeller's view is that bridge aesthetics is to some extent objective, that engineers need to play a key role in improving the appearance of bridges, and that they can do so by learning aesthetic ability. His book is targeted not at "iconic" or "landmark" structures, but at the everyday, and most particularly at American highway bridges. 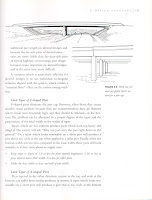 Gottemoeller's "ten determinants of appearance" seem prosaic: vertical and horizontal geometry; superstructure type; pier placement; abutment placement and height; superstructure shape; pier shape; abutment shape; colours; surface texture and ornamentation; and signing, lighting and landscape. However, this is precisely why I enjoy his book so much - it targets the types of bridge which are most common (and often designed most poorly), and addresses them in a manner which is straightforward to understand. His message is: anyone can do this!

Most of Gottemoeller's key guidance is well illustrated with simple sketches and relevant photographs, and often couched in terms of simple geometric rules, such as relating abutment height to end span length on multi-span viaducts. These are ideal for dunderhead engineers, who love rules and formulae, but behind the numbers there is a drip-drip-drip feed of deeper aesthetic principles - proportion, rhythm, the distribution of material to define the space that surrounds it. Readers who persevere seem likely to imbibe an intuitive visual understanding alongside what seems to be simple and algorithmic.

Bridgescape ranges far beyond being a simple manual for use in better distributing lumps of concrete. It encourages readers to come to terms with their personal aesthetic responsibilities, and gives them a simple design language to make their journey less painful. It offers plenty of real-world examples, both good and bad. It tackles issues of cost, and discusses how design engineers can collaborate with others - especially with the general public, that perennial bugbear of the American design process.

Some of the advice is local or specific to certain types of bridge, but most of it is broadly useful. It's one of the books on bridge aesthetics where I can remember the content most clearly, and that's a testament to the author's patient, straightforward explanation. I think there should be no highway bridge designer without this book on their shelf, and more widely it should be of interest to anyone concerned with creating simple, effective, visually appropriate bridge designs.

(Footnote: I've reviewed the 1st edition of this book. However, the 2nd edition from 2004 is the one to get, with updated material and far more photographs in colour).
Posted by The Happy Pontist at 8:47 PM

I really enjoyed the sentence "It's one of the books on bridge aesthetics where I can remember the content most clearly, and that's a testament to the author's patient, straightforward explanation. " in the post.
It's been some time since I read the book, but as far as I can remember, the effectiveness of explaination came mostly from repeating the key principles again and again. It makes up an efficient drill, but re-reading most of the things seemed too patient and straightforward to me.

Nevertheless, it's a good book to start with.

So far I have all of the books in your current batch. I was happy to learn that the newer edition of "Bridgescape: The Art of Designing Bridges" has better photos. My personal review of this book is complimentary, but notes that, "unfortunately, the publisher scrimped on the photo reproduction."

We will have to wait and see whether you can still claim the complete set once all ten have appeared!

Same here. So far I also have the first five ;)

I just like and totally agree with the name of this book ' Bridgescape" and it made me read this book.
This book has ver few case examples and talks about the principles.. But you realize that you learnded a lot from this bbok after you read it and you probably read the all book may tiem when you come accross with a problem in your deisng and check what book mentions about this...

What about the "Hambly - Bridge Deck Behavior " book Happy pontist which deserves to be in top 10 if you are not excluding theory books.

I'm limiting my choices to books I can pull off my bookshelf, and Hambly is a book that I borrow if needed rather than have on my own shelf. It's also quite out-of-date now. But it is undoubtedly an essential book for thousands of bridge engineers!