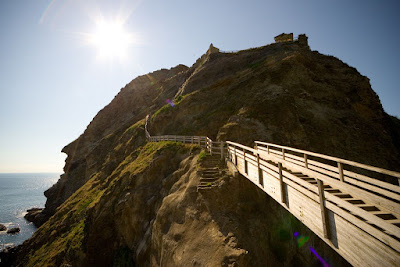 I imagine that shortly after the Tintagel Castle Bridge Design Competition was announced yesterday it was possible to hear the sound of an enormous chorused "slurp", as bridge designers everywhere (and I do mean everywhere) licked their lips at the prospect unveiled before them.

Tintagel Castle is one of the historic treasures of Cornwall, a spectacularly situated 13th century ruin, perched upon a rocky headland, and reachable only via lengthy steps and a short bridge. It is protected within the custody of English Heritage, who have decided that it is time for a new bridge, to be situated some 28m above the existing span. This will provide greatly improved access to the site, as well as opening up impressive new views. EH are running a design competition to find a £4m bridge which they hope will be both "elegant" and "structurally daring" (mercifully, the word "iconic" is absent).

It's difficult to think of a more challenging site. It is of huge visual and historic sensitivity, with the Castle and surrounding landscape garnished with a substantial number of official protective designations. In addition, access for construction will be extremely difficult - it is far from straightforward even to bring in plant for site investigations, let along for building works.

The bridge design competition will have two stages: an open prequalification stage, followed by a concept design stage for up to six shortlisted teams, each of whom will receive a £5,000 honorarium. Expressions of interest must be submitted by Tuesday 21st July, and the shortlist is expected to be announced in late August. A competition winner should be declared in January 2016, and English Heritage expect to open the new bridge in 2019.

It's a marvellous opportunity for talented designers to show what they can do, and I hope the selection process and competition judging will allow some truly exceptional teams and concepts to emerge.

I love Tintagel. I love bridges. I love a competition. Thank you Mr Pontist - If it weren't for your post, this would have passed me by.