Ardent pontists can satisfy their overpowering appetite for the latest, greatest bridges with any number of coffee table books, many of them utterly awful in their disdain for those who have laboured hard to make these bridges a reality. For example, I cannot really recommend Martin Pearce and Richard Jobson's Bridge Builders

(2002), despite the many fine bridges it contains, since it relegates most of the engineering firms to a handful of footnotes at the end of the book. Similar concerns about attribution bedevil Chris Van Uffelen's Bridge Architecture and Design (2010), which also falls prey to the idea that a pretty picture defines a good bridge. 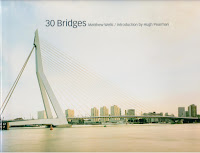 ], by Matthew Wells, is much better. Wells is a practising engineer, and an unusually literate one. Evidence of his unusually perceptive intellect can be found throughout the book's introductory essay, a brief history of bridge design. This touches on many of the obvious characters of conventional bridge-building history (Brunel, Strauss, Maillart etc), but is particularly good on the contingent element of history: its dependence on the specificity of individual projects, opportunities and individual actions.

Wells makes clear that history is not an orderly ascent of the mountain of progress, recounting the many failures which have punctuated our engineering past. He also situates bridge building properly within a broader context of economic drivers and technological transfer from other industries. Significantly, Wells' history is a critical history - he applies the understanding of his profession, as a structural engineer, but retains a careful distance to all that he recounts. 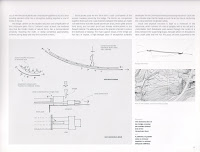 In his choice of 30 case studies, Wells seems at first to err towards the well known, such as the Gateshead and London Millennium Bridges, Pont de Normandie, Sunniberg Bridge, Punt da Suransuns, and Solferino Footbridge. Although he is hardly noted as a bridge designer, he boldly includes two of his own designs, the Plashet Grove School Footbridge, and the Royal Victoria Dock Bridge. What unites the bridges is that they are contemporary in nature, with the oldest dating to 1984, and that they offer the opportunity both to explain and to analyse.

Some of the examples are chosen to make explicit particular topics. So, for example the Helgeland Bridge, a major cable-stayed bridge in Norway, is used to explore the tendency in bridge engineering design to move away from generic loadcases and towards site-specific determination of traffic and wind loads. Design moves from a process of complying with prescribed rules to one of determining hazards and probabilities and enabling an informed judgement of tolerable risk. 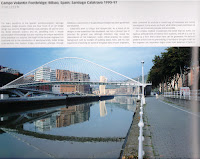 Other bridges are used to illustrate points about how design ideas have developed historically, so that what present-day engineers consider appropriate is often constrained by its past evolutionary history - a feature also present in biological evolution.

As a critic, Wells is astute. Considering the work of Santiago Calatrava, he says "some works are fluent, while others seem overblown; all of them are immensely popular and accessible". He notes that one reason for Calatrava's ability to generate unorthodox structural form is that he does not draw primarily on the present and past of engineering, but is instead inspired by the flight of birds or other "poetic" visualisations. Later, he perceptively observes how "many of Calatrava's bridge are set up on their abutments, rather like a cake on a cake-stand". I also admire his critique of the otherwise over-praised London Millennium Bridge: "Unfortunately, because the deck section is pared down to the minimum, the main cable arrays must be inflated into heavy bunches to cope with the highly distorted form, which results in the two elements approaching visual parity and conflicting with each other".

The two of Wells's own designs included in the book emphasise the advantages of an outsider's perspective. By virtue of not being a specialist bridge engineer, he is free to contemplate what those more firmly ensconced in the tradition might not, resulting in numerous unusual but thoughtful details on both structures, and in the kit-of-parts approach to the assembly of the Royal Victoria Dock structure.

The book is well illustrated with photographs and diagrams, but also with the author's sketches, intended generally to try and explain structural engineering principles and details. Non-specialist readers will learn far more from 30 Bridges than from most of its coffee-table competitors.

Overall, the strength of the book is its willingness to critique rather than simply to depict, to try and get into the guts of the various bridges and understand what makes them work well, work poorly, or just work differently. There are very few voices from within the structural engineering profession capable of producing anything similar, which is a shame.

Wells has also authored Engineers: A History of Engineering and Structural Design

(2010), which I also happily recommend, especially to those (the majority) ignorant of the development of their own profession.
Posted by The Happy Pontist at 11:57 PM

I'm 6 out of 7 now. I enjoy your blog especially for the blunt appraisals. My personal bridge book data-base has blunt assessments of each volume in my collection. Here is the one for "30 Bridges".
Historical survey of bridges introduces a detailed analysis of 30 modern structures. Profusely illustrated in color and b&w.An elegant presentation in spite of the "architect speak" (e.g. palimpset, hysteresis, serried, drumlins, eskers, monocoque,valencies,parametric, reified,arrised and pelmets). It provides me with many additions to my target list of modern bridges.

I remember drumlins and eskers from my school geography class :-) Hysteresis is fairly commonly used by engineers, e.g. to describe the behaviour of soil behind the abutments of integral bridges. And arrises are common enough that they appear on the notes of many of my design drawings. "Monocoque", on the other hand, is just a pretentious alternative to what most engineers refer to as boxes, it's always irritating.