Back in 1949, the Museum of Modern Art was taking bridges seriously as a subject for their attention. Elizabeth Mock was MoMA's director for architecture and industrial design, and a committed advocate for modernism. The Architecture of Bridges (MoMA, 1949, 128pp) [amazon.co.uk

] has been described by the Encyclopaedia Britannica as "the first major book on bridges to give a modern viewpoint".

It was a significant occasion. Most books on bridges prior to this point were historical in their intent, such as Henry Grattan Tyrrell's History of Bridge Engineering (1911) or Charles Whitney's Bridges: A Study in Their Art, Science and Evolution (1929). Where those authors did provide information on what was happening in the present day, it was largely focussed upon the large and most heroic spans that provided the key milestones in early 20th-century bridge engineering.

Mock's book was probably the first authored from an entirely different perspective, recognising that as large-scale industrial structures, bridges could embody key tenets of modernism, such as form following function, exposure of structure, and elimination of detail.


"Beauty is not automatic; technical perfection alone is not enough. A great engineer is not a slave to his formulas. He is an artists who uses his calculations as tools to create working shapes as inevitable and harmonious as the natural laws behind them. He handles his material with poetic insight, revealing its inmost nature while extracting its ultimate strength through structure appropriate to its unique powers".

She was not alone in her mid-century recognition that engineers could be more than calculators. Architecture critic Sigfried Giedion had championed the Swiss bridge designer Robert Maillart, including him in his seminal book Space, Time and Architecture and exhibiting photographs of his bridges at MoMA in 1946. Artist and designer Max Bill also published a comprehensive overview of Maillart's work, Robert Maillart: Bridges and Constructions, in 1949.

The Architecture of Bridges also heavily features the bridges of Maillart, but is wide-ranging in overall scope, and critically acute. It features a who's who of (mostly) 19th and early 20th-century bridge engineers, and cheerfully mixes the well known (Stephenson, Brunel, Leonhardt) with the obscure, wherever it can find aesthetic merit. It features a number of essentially generic bridges alongside the more famous examples, for example, typical highway overbridges from the USA and Germany, offering a keen appreciation of their aesthetic successes and failures.

The book establishes a coherent critical vocabulary which remains relevant today, being bold and perceptive in its judgements. Many others have followed after, although primarily from a position as engineers themselves (Mock paved the way for the writing of Fritz Leonhardt, Frederick Gottemoeller and David Billington, amongst others). 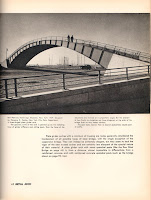 I think The Architecture of Bridges remains significant today precisely because it is a fine example of a viewpoint from outside the engineering field which nonetheless shows a good understanding of engineering issues and uses these to address a broader audience. If it seems at first glance to be essentially a picture-book, it hides within its many picture captions a well thought-out and provocative aesthetic philosophy.

I admire it as much for this as just for the way it documents so many interesting and exciting bridges.

MoMA's entanglement with modern engineering did not end here, either. In 1964, the Museum published Twentieth Century Engineering, which entirely omits the architectural criticism but includes many exceptional photographs of industrial and civil engineering work, bridges and buildings but also dams, radio telescopes, tunnels, masts, water towers and much more.
Posted by The Happy Pontist at 10:25 AM

This fine book can be seen in its entirety at the Visual Telling of Stories.
http://www.fulltable.com/VTS/b/brdg/bmoma/a.htm