Okay, I'm nearly done with reporting on my trip to Venice. In this post, I've got a few photos of the more ordinary bridges encountered there, generally without comment. These give some idea of the range of structural forms used on the smaller spans in the city. Click on any image for a larger version. In the next post, I'll say a few words about the IABSE Symposium that prompted my trip. 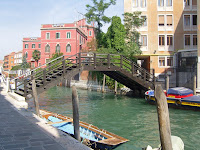 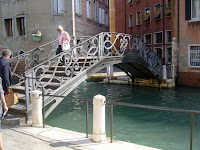 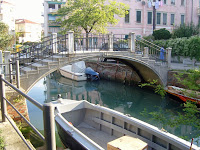 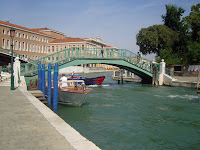 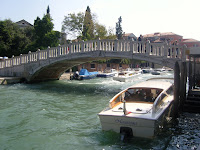 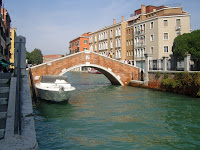 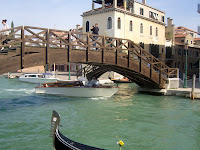 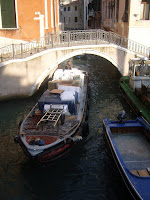 In addition to the four bridges previously blogged, Venice's most famous span is the Ponte dei Sospiri ("Bridge of Sighs"). This is a covered bridge originally used to transfer prisoners to and from interrogation rooms in the Doge's Palace. It's not a particularly interesting structure, only spanning 11m, but given its fame I was surprised to find it almost hidden behind huge advertising hoardings.

And I'm not the only one, with Lord Foster and others protesting against this bizarre defacement of a UNESCO World Heritage site. The adverts help to pay for the building restoration work, but it's a little like sticking a giant MacDonalds logo across the Taj Mahal, I think.

I see that Venice's mayor has responded to criticism, saying "If people want to see the building they should go home and look at a picture of it in a book". Is there any other city of such heritage significance which seemingly finds it so hard to raise money through more conventional routes?