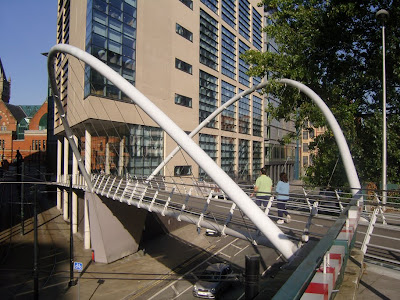 A recent day trip gave me the chance to visit one more bridge in Manchester. There can't be many more left in the city that will be of interest here! 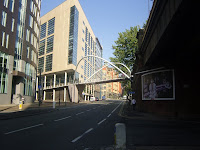 Manchester Curve must be one of Wilkinson Eyre's least well known bridge designs. It's a 35m span footbridge built as part of a new office development, and spanning a city centre highway. It was built by CTS Ltd. Apparently, it carries 3.5 million pedestrians every year.

When it first opened, there were concerns about its proximity to overhead tram power cables, but I don't know whether any changes have been made in response. 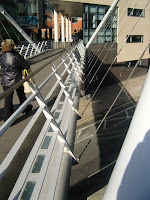 The structural form, with two inclined arches, is very similar to Wilkinson Eyre's much earlier Butterfly Bridge. That spanned a river in Bedford, but the shape works just as well in the dense urban environment of Manchester.

The Bedford Bridge had more interesting parapets, with kinked posts which first incline outwards parallel to the cables before kinking back inwards. 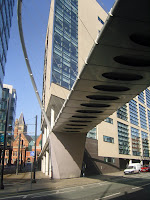 The Manchester Curve has a box-beam deck with elliptical cut-outs, similar in style to the Whatman's Field Downstream Bridge. These serve a dual function of breaking up what would otherwise be a very dull underside, as well as preventing the box from becoming a closed beam inaccessible to maintenance. It's an attractive detail, the only concession to texture in a bridge which is generally no more than it has to be. 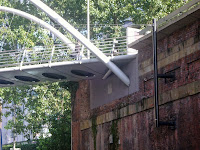 The least successful detail of the bridge results from the way that it passes above the highway at quite a high skew angle. Unfortunately, the supports have not been angled perpendicular to the bridge, but parallel to the highway, with the result that the two arches don't both spring from the same point on the support structure.

This is compounded by the fact that the bridge bearings are hidden behind a rendered facade, such that the bridge seems to be partly embedded in concrete. It all looks terribly awkward, although I imagine there's a good reason.

The Manchester Curve is simple, elegant, and contemporary. It's good to see that some of the many footbridge forms generated in the last couple of decades have the potential to be reused and reinterpreted, rather than just being developed for novelty's sake.