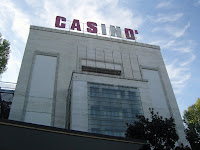 This was my second time at an IABSE Symposium, and the first where I had time to sit back properly and take in as much of the conference as possible. The event was held in the Casino building on Venice Lido, an interesting venue with considerable historic charm, some of the rooms featuring unusual lighting, a copper ceiling, and wall mosaics.

The papers presented were widely varied in both quality and content. There were one or two where the engineering principles seemed surprisingly lightweight. Many of the papers were also quite esoteric, by academics for academics, and very few tackled the Symposium’s ostensible theme ("Large structures and infrastructures for environmentally constrained and urbanised areas").

The guest and keynote presentations were generally of high quality, but the conference format, which gave each speaker about 8-9 minutes for their presentation, actively discourages discussion and debate. Most of the best discussion took place over coffee or meals.

There were, however, moments when a greater level of interaction broke through. The design for the new Bundek Bridge in Zagreb (pictured, left) was presented, and it was difficult if not impossible to see how it actually stood up. It seemed to comprise an organic, curved gridshell frame suspending a highway deck, something that might work well as a building roof supported on all edges, but made little sense for a bridge spanning end-to-end. When this was queried (by the famous Swiss engineer Jürg Conzett, who wondered where the top flange of the lattice truss was), the speaker had no real answer, and I can’t find any in the full paper either. Conzett’s own Traversina Footbridge was presented in the same session, and offered the perfect counter-example, true structural art rather than a fantasy.

The Zagreb structure wasn’t the only example of a design where any engineering rationale had been submerged (drowned, even) by the architectural vision. One voice which clearly articulated the opposing view came in a paper "on the development of structural criticism through case studies", a topic dear to the heart of the Happy Pontist. The author, Ignacio Payá-Zaforteza, compared two large cable-stayed bridges in Spain, Calatrava’s Serreria Bridge (image courtesy of e.phelt on flickr), and Troyano’s Bridge over the Lérez River. The presenter took as his critical frame the criteria of David Billington: economy, efficiency and elegance, and unsurprisingly came out very much against the Calatrava design, which has as its major sin the use of a 155m main span to cross a redundant river bed, something more readily achieved with a multi-span viaduct.

While I’m all in favour of more open criticism of structural design, this paper veered too close to the puritan orthodoxy for my taste, citing with approval Schlaich and Menn’s contentions that an appropriate price premium for a more attractive bridge is of the order of 5-20%, and absolutely never more than 50%. This sort of dogma ignores the fact that bridges (and even giant sculptures disguised as bridges) have a value too, not just a cost. 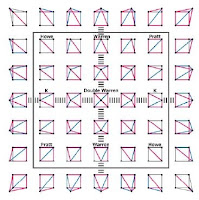 Among the many other papers, one that stood out was Yoshiaki Kubota’s "Systematization of structures and forms of truss systems", which presented an elegant framework showing how five basic transformations can be used to generate the geometry of most or all known truss systems, as well as many more types not already known (just one of the transformation diagrams is pictured here). This formed part of a wider framework emphasising the continuity between the traditionally separate bridge forms of beam, truss, arch and suspension bridge.

With a total of 378 papers included in the conference proceedings, it's impossible here to do more than scratch the surface. As with any conference, there was as much value in the opportunity to "network" than in the technical material presented. In Venice, that also mean the opportunity to explore and enjoy the city itself, including both the bridges already featured here and the Pier Luigi Nervi exhibition previously mentioned.

The next IABSE Symposium is in London, in September 2011, which should be particularly interesting as it is being jointly organized with the International Association for Shell and Spatial Structures (IASS).
Posted by The Happy Pontist at 10:13 PM

Do you know if "Systematization of structures and forms of truss systems" is available anywhere for reference? A quick google search didn't turn up anything useful.

I don't believe it is available online, so the best bet is to try and track down the author's email and contact them. Or purchase the conference papers, but that may not be the cheapest option!