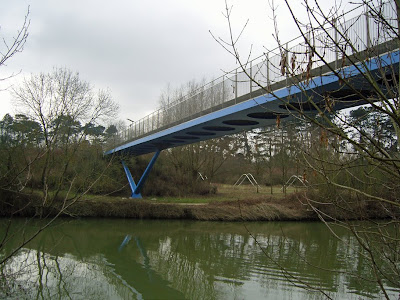 The last of the trio of millennial footbridges in Maidstone goes by the somewhat cumbersome name of the Whatman's Field Downstream Bridge, so called simply because it is further downstream on the River Medway than the Kent Messenger Millennium Bridge.

Like the Messenger bridge, the Downstream Bridge was built by Balfour Beatty (steelwork fabricated by Fairfield Mabey), and designed by Flint and Neill with Studio Bednarski. It also opened in July 2001, but it's a very different bridge.

On Bednarski's website, it's called the "Blue Art Beam Bridge", and that seems apposite. It consists of a three-span, 75m long single steel box girder, in a very unusual "top hat", "spine beam", or "finback" arrangement. The river could only be closed for 4 hours for the main span lift. In most box girder bridges, the wider flange is at the top, to allow the full width of bridge deck to be carried while allowing the main structural section to be narrower and hence more economic (as well as visually appealing). 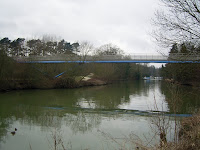 There are a few cases where the box girder has been inverted, with a recent example being Gifford's Central Park bridge in Manchester (illustrated in Masterpieces: Bridge Architecture + Design and the subject of a technical paper). This allows the construction depth (i.e. depth from top of pavement or rails to underside of bridge) to be minimised while retaining the advantages of the box girder form, and is a rarely used alternative to a through-truss design. The major disadvantage is that such bridges are often bulky and ungainly in appearance.

So, for the Downstream Bridge to have the wider part of the box section at the bottom seems initially a perverse choice. But the reason may be apparent from the two photographs above. Only the bottom part of the cross-section is highlighted by painting it blue. The upper part is recessed behind the parapet mesh, and a mesh hides the detail from above as well. The intent is to make the bridge deck appear far thinner than it really is, and I think it works well. 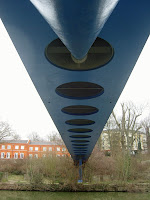 The other prominent feature of the bridge deck design is the presence of numerous circular cut-outs in the girder's bottom flange. These are in part a response to the technical approval authority's refusal to accept a fully enclosed box girder (presumably on the grounds that it would be too shallow for internal inspection). They allow for inspection access to all parts of the girder, but are protected against unauthorised entry by the use of grilles. Clearly, they will have made the design more challenging, with the girder effectively having two bottom flanges connected by a series of lateral crossbeams, Vierendeel style, providing the required torsional stiffness.

The bridge certainly needs plenty of torsional stiffness, as its two V-shaped supports are aligned along the bridge centreline, providing no resistance to torsion at all. All the torsion in the bridge is resisted at the end abutments. 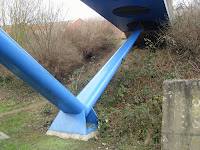 The supports are made from tapered tubes (presumably circular tubes welded to flat plates or fabricated boxes), supported by a simple stiffener detail. The choice of V-shaped piers on the bridge centreline is shared with Arup's Gatwick Air Bridge [PDF] and makes me feel a little queasy: the lack of wider supports at the intermediate piers just looks somehow wrong to me, as if the whole thing could topple in the wind. 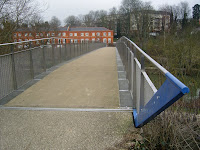 The bridge parapets use the same stainless steel "Medway" mesh as on the Kent Millennium Messenger Bridge, and like that bridge, it results in a simple and minimalist line to the structure. The photo also shows the grille panels which hide the bottom flange (while unfortunately also trapping debris).

You can also see a slight kink in the vertical alignment, which is unfortunate. I wonder if it's a relic of the need to change the bridge height during the design period. This unhappy tale is told in detail in an audit report [PDF], commissioned to explain the substantial overspend on Maidstone's Millennium River Park project. This noted a £200k overspend on the bridges (relatively small beer), attributable to high tender costs, a major flood which occurred during construction, and the need to raise the planned bridge height by 1.5m in order to mollify river users unhappy with the effect on their navigation rights.

It's nice to see a bridge which is colourful, although blue is perhaps too often the choice on steel bridges. I think the attempt to make the deck look slender has been very successful, and the circular openings below deck help break up the mass of the bridge as well as being functional. As with the other Maidstone footbridges, it's an idiosyncractic design and not one likely to be repeated often elsewhere (if at all). Nonetheless, it's always good to see designers stepping into the unknown, and it's a worthy member of a very interesting trio.

Posted by The Happy Pontist at 8:27 PM