Infinity Bridge is 237m long in total, with the two arches being 120m and 60m. It was designed by Expedition Engineering and Spence Associates (not without controversy), and has been built by Balfour Beatty. It was the winning design in a RIBA competition held in 2003, and more recently it won the ICE Robert Stephenson Award. Quite right too - although I've got a few quibbles with it below, it's a distinctive and impressive structure.

It's not difficult to see why this design was a winner. Working on the assumption that what regeneration bodies are really after is a gigantic logo, not a bridge as such, the twin arches lend themselves to this purpose (see also Spence's River Wear design for the same principle). If you go to the Infinity Festival website, you can see the logo that has resulted.
What makes it work as a logo is the sag-curve connecting the two arches, giving the bridge an attractive sinuous quality, looking as if it would rather dance across the river than plunge into it. I've had a problem with that sag ever since I first saw it, as structurally it appears to be doing very little, and actively misleads the viewer as to how the bridge really works. However, in some of the more recent construction photos, the legs of the arch are more prominent visually, and I think you can see it either way, it's a more pleasing detail than I had thought. It also connects the arches such that they stiffen each other, reducing the bending moments in both arches. 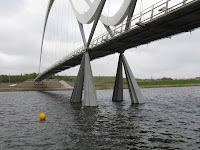 I'm less convinced by the river pier, which looks like a set of four paper fans folded and propped against each other. The legs are angled to contain the worst-case arch thrusts, and are also designed to resist ship collision forces. The stepped edges in the pier legs (pictured right, courtesy John Yeadon on Wikipedia) seem fussy and inconsistent with the main arches, although the same detail has been used on the bottom section of the arch to visually separate it from the sag element.

The only other criticism I would offer is the tripodal nature of the split arches, whereby their extreme ends sit on a single point of support, with the river-pier legs offering two supports. From most viewpoints I think it's very elegant (see image on the left, copyright Expedition Engineering), which may owe something to the way the arches have been shaped by form-finding procedures to carry little or no bending under dead loads.
However, it leads to an awkward structural detail, as the arch ties and arch support don't coincide in plan, resulting in a hammerhead detail hidden below the deck to carry the thrust forces. I don't imagine anyone other than an engineer would ever notice, let alone find it unsatisfying. It's not clear what the alternative would have been, as bringing the arch tie directly to the arch springing would be geometrically very difficult.
Noting that the bridge deck is 4m wide between handrails, it has cost about £15,000 per square metre, which is very definitely at the upper end for landmark footbridges (compare Forthside Footbridge, which was similar). This figure seems particularly high when noting that the approach spans are relatively straightforward in structural form i.e. if you looked at the river spans alone, their cost per square metre is actually higher.

In this context, it's perhaps worth noting that back in 2003, Tees Valley Regeneration were seeking a bridge costing a mere £4m to £5m. By any yardstick, a 200% cost over-run is a shocking performance, but there's little doubt that Stockton-on-Tees would have got a considerably less special bridge for the original budget.

Why did the Infinity Bridge cost so much more than anticipated? For one thing, the original budget was clearly out-of-step with the client's aspirations for a major river crossing such as this. Nonetheless, I wonder whether the form of bridge chosen plays a big part. 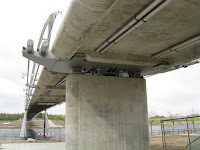 The bridge is designed as a twin tied-arch, where the arch thrusts are resisted not by the foundations, but by tie cables running at deck level. These are visible in the photo on the right (courtesy John Yeadon), just outside the deck edges (there are "bars" running below the deck, but I assume these are service ducts e.g. for lighting cables). As with any tied arch, the structure as a whole is not stable until both the arch and tie member are complete, and any structure which is not stable until complete normally requires extensive temporary support and/or a more complex construction sequence.

From the construction photo on the left, it's apparent that the ties were installed only after the arches were lifted in, implying that the foundations must be designed to resist thrust from the arches' self-weight in the temporary state. This should not be a huge force, and the erection sequence has at least minimised the need for temporary propping. I am also told that it doesn't govern the river pier design (as this has to cope with ship impact, which is larger).

The tie cables are independent of the deck itself (this is shown in the construction photo on the right, again courtesy John Yeadon, where the cables are temporarily lifted out of the way while deck segments are installed). This will have complicated the erection sequence, but substantially reduces temporary propping requirements, as the foundations don't have to resist temporary arch thrusts relating to the weight of the concrete deck.

Essentially, the tied arch is not the most economic option at this site. A cable-stayed design (which can be built segmentally and is normally stable throughout construction without significant temporary works) would have been cheaper. Buildability should come first in any bridge engineer's thought process, but on the Infinity Bridge it has been more of a case of choosing the bridge's structural and sculptural form, and then working through the challenge of construction in an intelligent manner. That's not necessarily the wrong decision, but it certainly reduces economy, and many of the cleverest bridge designs are those that arise naturally from the imperatives of construction, rather than hinder it.

Having said all that, one thing that most impresses me about the design is the extent to which the designer's original vision has been translated into the final construction. Having seen the tender drawings back in 2006, it's clear that the contractor has made very few changes to Expedition's design. That must be a tribute to the thought given to the buildability of the bridge, some of which is illustrated in the assembly images Expedition produced (see example on the left).

Overall, it's easy to nit-pick, but I think this is a very successful design, with an original aesthetic vision which has been followed through with minimal compromise. Unlike several recent bridge competition winners, the design is led by a clear structural concept, rather than distorted for exaggerated effect.

Posted by The Happy Pontist at 8:31 PM

I don't know whether you have been up to see the Infinity Bridge yet but here's my album of pictures on-line for a while at least.

Some very interesting photos there, which suggest the detailing is a bit poor in several areas. I've no plans to visit the bridge in the near future, unfortunately!

Unfortunately I 'm not writing in english but if you are interesting ton read in French.

I'm mostly agree with all that you said exept, I thinck that tied-arch
can be very cheap and performant. in that case I beleve that the tied cables are also used to post-pre stress the concret deck.

I will write one or two more Post about the bridge after the visit that I did last week end.

Main objects that I submid to you:

The 6 sets of dynamic absorbers.
The water proof finish by silicone paste.
The missing of rain water nowledge.

But about the subject off pure enginering Chris Rise is a great engineer,the best yang that I now