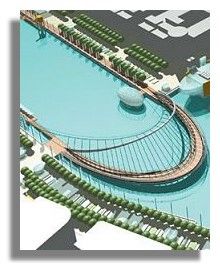 Poor old Glasgow. It would be no surprise if their city council never built a new bridge again after their tribulations of the last few years.

First there was "Neptune's Way" (shown above right), winner of a lavish competition for a new footbridge between Broomielaw and Tradeston, which was cancelled when the contractor's bids came in well over the council's budget.

Then there was the failure of a hanger on the Clyde Arc (locally nicknamed the "squinty bridge"), resulting in its closure for over 5 months.

Now there seems to be a problem with slopes on the deck of the Tradeston Bridge (locally nicknamed the "squiggly bridge", and shown on the right). This is the proposed footbridge that replaces the failed Neptune's Way project. According to both the Evening Times and the Herald, there are slopes of up to 15cm on a full-size mock-up of the deck prepared by fabricator Steel Engineering, and these may cause problems for some bridge users.

The reports aren't very clear, but they seem to me to imply a transverse crossfall (i.e. a drop of 15cm parallel to the river). If it were longitudinal (parallel to the bridge span), then it should be straightforward to get up and down 15cm, given sufficient length of bridge. But if it is the crossfall, it's easy to see why it might be difficult for some pedestrians to negotiate - not just the mobility-impaired but people with pushchairs might also find it awkward.

It's odd that this was in the Glasgow press two-and-a-half weeks ago, but doesn't seem to have been picked up in the national civil engineering press. As with many non-technical press reports on bridge problems, it's hard to figure out what's really going on. It may be a storm in a tea cup, a perfectly good design misinterpreted by the fabricator. But I'm sure Glasgow city council would be much happier if the Squiggly Bridge was the one crossing of the Clyde that had gone forwards without any problems at all.
Posted by The Happy Pontist at 2:38 PM

Things don't get any better for the Squiggly Bridge. Back in March, the Evening Times reported it was running six months behind schedule. Now, delays are suggested as being as much as a year.

While some of this is down to problems with the bridge abutments on the river quay walls, the Evening Times suggests there is also a dispute with the steel fabricator.