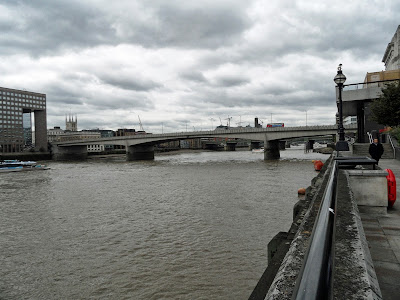 London Bridge is, with some justification, one of the most interesting bridges in Britain, with a fascinating history. There have been a number of bridges at the site, with the earliest permanent structures dating back to Roman times. Significant reconstructions took place in 1176-1209 (Peter of Colechurch's Old London Bridge), 1824-1831 (John Rennie's New London Bridge), and 1967-1972 (the present bridge, by Mott Hay and Anderson with William Holford and Partners). I see these as a little like Doctor Who's regenerations, with the present bridge very much the Peter Davidson of the series, not the Tom Baker or William Hartnell. 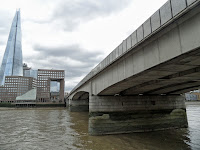 I will say very little for now about the earlier bridges - there would simply be too much to say, which will have to await another opportunity. I've similarly limited the references at the end of this post to only those which have something useful to say about the current structure. 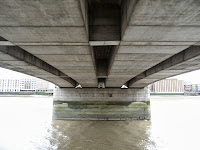 John Rennie's bridge lasted for about 140 years. It comprised five granite arches, found to be slowly sinking into the ground even in the 1920s. It had been built alongside its predecessor, which remained in use throughout construction, but the same approach could not be taken again. Instead,when a decision was taken to replace the bridge, it had to be retained in use while the new bridge was built along the same alignment. The new bridge was designed for four lanes of traffic, two unusually wide footways, and even to support a proposed overhead walkway equipped with travelators. 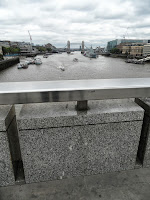 What can be seen today offers little if any evidence of its exceptionally complex construction sequence, which is a shame, as this was a truly exceptional project. Peter Jackson's book, London Bridge: A Visual History has diagrams and photographs taken during construction, but the best document of what took place is Albert Yee's London Bridge Progress Drawings. Both books are well worth seeking out, and I've included a couple of Yee's marvellous sketches below to illustrate the construction work - click on any image to see it full size.

To build the new bridge, giant shafts were excavated below the existing structure, with workers hand-digging these some 25m below the riverbed. The balustrades of the Rennie bridge were taken down and a giant overhead truss erected at one edge of the bridge. This was used to assemble twin-celled precast concrete box units over the river. Gaps between the units were filled with in-situ concrete and the assembly progressively post-tensioned. Match-casting and glueing was considered but rejected. The prestressing is a mixture of internal tendons in the flanges, and external tendons adjacent to the webs.

Once one side of the bridge was complete, the second edge was rebuilt in the same way. This allowed foot and road traffic to be transferred onto the new bridge decks. Demolition of the original bridge could then commence, with the internal spandrel walls and infill removed first. The gantry truss supported temporary panels below the deck while the arch voussoirs were removed one by one, destined to be reused to clad a reinforced concrete replica bridge at Lake Havasu City in Arizona. Once this was complete, the gantry was used to assemble the final two box girders in between the first two deck sections.

Every part of this operation was an amazing piece of work in its own right, including the massive gantry structure, which weighed 1900 tonnes. This was designed both to support the weight of the existing structure during demolition, and the weight of the new precast units during construction, whichever gave the worst effect.

The geometry of the bridge was determined largely by navigational requirements. The choice of four box beams was made to facilitate the traffic management needs during demolition and construction. Although the bridge appears continuous, it is actually not. There is little sign of its articulation on the monolithic elevations, but two expansion joints are visible in the carriageway in the centre span. The bridge consists of two large cantilevers which support a short central suspended span, as shown in the illustration above, taken from the ICE Proceedings paper on the bridge design. The technical papers, I have to say, are well worth reading, a model of comprehensive, clear information, and the subsequent discussion in the Proceedings is a source of information regrettably generally absent today. 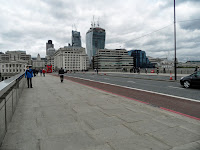 The bridge today is mainly characterised by a sense of corporate blankness, particularly apparent with the granite block parapets, which look like they could adorn the front of a City bank as happily as sit on the edge of this enormously wide bridge. The sheer width is essential from a practical point of view, particularly at rush hour. Nonetheless, it's hard not to think how much it could be improved by some simple planters, seating or even a few trees. The footways were originally equipped with heating elements to prevent ice formation, but these have long since ceased functioning. 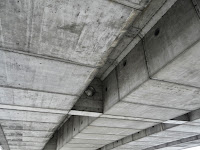 I do like the underside of the bridge, where the concrete can be seen close up. This is the only place that a trace of its construction history is still apparent, and it shares the characteristics of the best brutalist London architecture of the 1970s. The diaphragms between the beams appear to be an oddity - Brown's paper on the bridge design states they were not needed for live load distribution, but only to cope with high concentrated loads from the proposed overhead walkway, which of course, was then never built.

Posted by The Happy Pontist at 9:40 PM