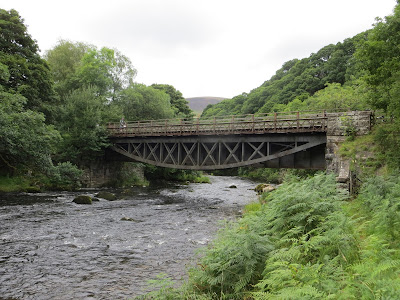 This is the last of the "upside-down" bridges as you head east along the Keswick to Threlkeld trail. This one is the shortest span at 80 feet. 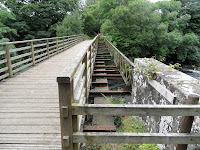 Unlike the other two similar structures I've already covered, this bridge has retained small X-frame parapets, giving it quite a different appearance. It's still difficult to imagine the bridge as it must have been when it carried rail traffic however. I assume it had a timber deck with the rails supported on large longitudinal timbers, width the crossbeam outriggers supporting a maintenance footpath. 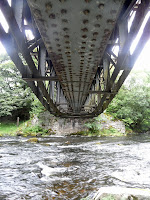 I was able to get a better view from directly underneath this bridge, showing the plate girder which was added when the bridge was strengthened in 1924-8. I wonder how the load was shared between the new girder and the original bowstring trusses, and suspect the girder did the lion's share of the work after it was introduced. 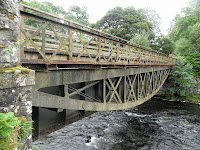 It's interesting to compare the two side views of the bridge in these photographs. The north face is considerably "greener" than the south, as you might expect. I wonder what the original engineers, Thomas Bouch and colleagues, would think of their structures being left in such a visibly dilapidated state. Perhaps they would just be pleased to see the bridge still in use, nearly 150 years after the railway line was originally built.

Posted by The Happy Pontist at 7:37 PM

Sadly Rowsome Bridge was damaged last December in Storm Desmond, this photo taken in the following days shows damage to the abutment;
https://www.flickr.com/photos/138825644@N02/24092992651/in/dateposted-public/

The Lake District National Park Authority has issued an update stating that the bridge will remain closed as engineers have advised that it's at risk of collapse, but they plan to reopen the route within 18-24 months;
http://www.lakedistrict.gov.uk/caringfor/localcommunities/northern-lake-district-area/keswick-to-threlkeld-railway-path