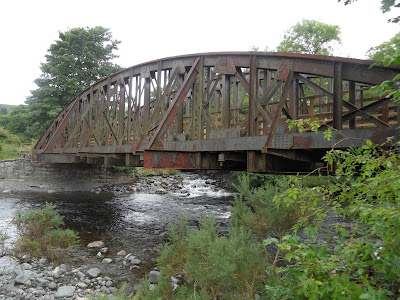 Bridge 71 is the longest span so far in this series, at 100 feet, and there are a number of details of construction which reflect the greater demands imposed on it by rail traffic. 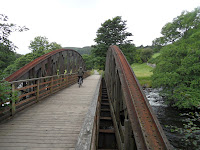 While the bridge retains the basic layout of the upright bowstring truss found at Bridge 69, the top flange of the "bow" is beefed up here with the addition of a trough-section on the upper face.

The original stabilising struts on the outer face of the truss have additional struts at their midpoint, to reduce their own propensity to buckle. 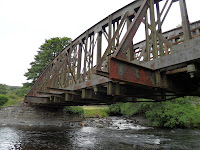 When the bridge was strengthened in 1929-31, a number of additional crossbeams were added below the deck, and some of these were extended to carry yet more truss-stabilising struts. These have been added at the midpoint of the truss X-bracing, requiring vertical strengthening to the truss at these points, achieved by adding pairs of steel channel-sections at each location. In fact, these were added at the centre-point of every "X", with a hugely adverse impact to whatever aesthetic the bridge may once have had. 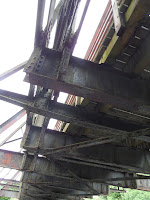 Closer examination of the underside of this bridge shows significant deterioration to the under-deck metalwork, as would be expected for this type of bridge, which would have had a timber deck even in its original configuration.

All in all, this is now one of the uglier bridges along the route, largely because of the chaotic jumble of strengthening measures which have been applied.

Posted by The Happy Pontist at 7:54 PM