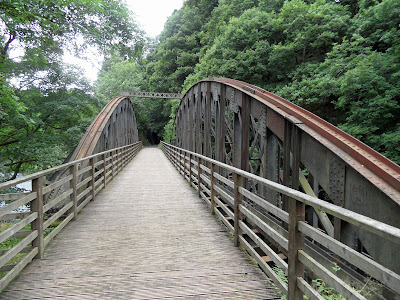 I'm nearing the end of this set of bridges which formerly comprised part of Thomas Bouch's Cockermouth Keswick and Penrith Railway (CKPR) line. 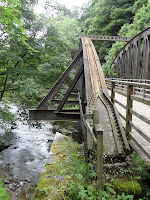 This penultimate bridge is another upright bowstring truss. Unlike the previous examples, Bridges 69 and 71, this one has overhead bracing between the trusses, although so little as to be barely worth having.

The bridge lies a short distance to the east of a lovely, short little railway tunnel. It spans 122 feet and has a pronounced skew. As with most of the other bridges on the line, it was strengthened during its lifetime by the addition of new cross-girders, additional diagonal bracing struts to the top chord of the trusses, and additional vertical stiffening on the face of the arches. You can see clearly in the photographs how much heavier the strengthening members are compared to the original metalwork. 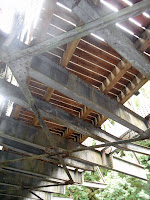 Although the railway line was closed in 1972, and converted to a foot/cycle trail quite recently, there are proposals to reopen the entire line as a railway (not just the Keswick to Threlkeld section forming the trail). These plans are being promoted by an independent group, not by any government body, and I have to say I think the likelihood of it ever happening is somewhere very close to nil.

They argue that the retention of the original railway bridges would make it easier to reinstate a railway line, but from what I saw when I visited, the present cycle and foot trail is extremely popular, and diverting it would be an expensive and possibly unpopular option. 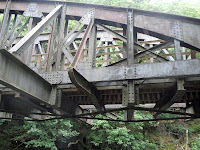 Although the bridges may broadly have the strength to carry local passenger services, they are not in marvellous condition and would require close examination, repair and repainting to be of any use for a new railway line. There are difficult obstacles elsewhere on the route, where the original track formation has not been protected against encroachment, and it seems unlikely to me that there is a business case of sufficient strength to attract the necessary private investment.

Posted by The Happy Pontist at 8:02 PM