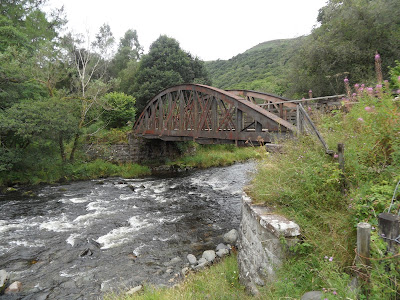 Continuing to head east, the next bridge after Bridge 67, is Bridge 69. I guess Bridge 68 may have been a culvert or a now-gone overline bridge. 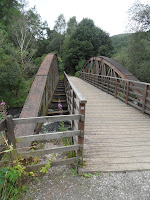 This is the first of the "right-way-up" bowstring trusses that I visited on this route. It spans 80 feet, with a slight skew. In many ways it will appear as a mirror-image of the previous two "upside-down" structures, with similar X-bracing in the truss elevations.

One difference is that the "bow", the curved member, consists of two flat vertical plates on the other bridges, whereas here they are topped with a horizontal flange plate. As the bow is in compression on this bridge, the flange is needed to prevent the other plates from buckling sideways. The overall lateral buckling of the truss is prevented by the presence of strut bracing on lateral beams which extend sideways from the deck. There are four of these on each side of the bridge, a slightly different arrangement from some other bridges on the line, as we'll see. 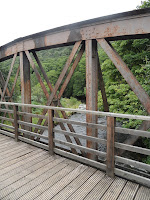 Bowstrings over the Greta indicates that this bridge required little or no strengthening when the railway line was upgraded for heavier trains in the 1920s/30s.

What is particularly evident now that the bridge trusses are seen close up is that little if any refurbishment was carried out when the former railway bridge was re-decked as a trail bridge. There appears to be nothing more than superficial corrosion to the trusses, but I wonder who will find the money to pay for repainting and/or repair as and when the bridges deteriorate further in the future. 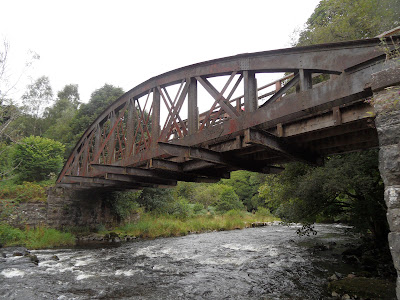 Posted by The Happy Pontist at 7:38 PM

The top chord vertical web plates look to be very slender, with no flange or stiffener on their lower edge. This appears to be rather an unusual detail, so I would be interested to know if there any evidence of the web plates buckling or distorting?

I didn't see any and can't spot any on my other photos of this bridge.