Bridges in Britain: 7. "Bridges of Britain" 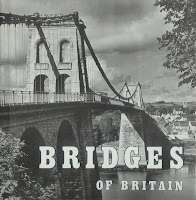 I guess that authors of books about British bridges had as much trouble naming their books as I did this series of posts. This is the third book titled "Bridges in/of Britain" that I'm featuring.

Written by Geoffrey N. Wright, and published in 1974, "Bridges of Britain" [amazon.co.uk

] is subtitled "A Pictorial Survey". The introduction is short and sweet, telling us that:

"Most bridges are fascinating, many are beautiful, particularly those spanning rivers in naturally attractive settings. The graceful curves and rhythms of arches, the texture of stone, the cold hardness of iron, the stark
simplicity of iron, form constant contrasts with the living fluidity of the water which flows beneath."

Essentially, this book takes the romantic view of bridges, with a preference for the old and rustic over the modern and technological. It does include a few twentieth century bridges, such as the Kingsferry lifting bridge, Kingsgate Footbridge, and M2 Medway Viaduct, but these are vastly outnumbered by older structures, particularly stone bridges. 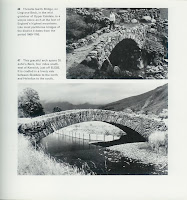 That isn't entirely disappointing, largely because the photographs are generally excellent, and most of the bridges well-chosen. In addition to a number of well-known medaeval bridges like Bideford Long Bridge or Devil's Bridge, there are some great pictures of clapper and packhorse bridges.

Each bridge is accompanied by a mercifully short paragraph summarising key points of interest, and I think the format works very well. The bridges are left to stand on their own, without distractions, in marked contrast to some of the books I've covered in this series which have a surfeit of text, with limited illustration. It seems to me impossible to give any sensible impression of a bridge without a picture of it!
Posted by The Happy Pontist at 8:04 PM

I own several books on bridges over the River Thames. One of my favorites is 'Bridge by Bridge through London,' which was written and hand illustrated by Tony Waters. It includes a map showing all the bridges from Teddington to the Tower Bridge and its small enough to carry in a pocket on my walks along Thames Path.

Oddly, that's not a book I've seen. Perhaps I'll do a Bridges in London series some day!