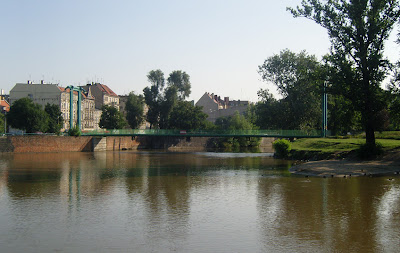 The Kładka Bielarska (or Kładka Żabia) connects Bielarska Island to the main river bank. There has been a suspension footbridge here since 1975, although it was largely reconstructed in 2002, including extensive reinforcement of the foundations with micro-piles. Before that, a truss bridge occupied the site. The bridge was designed by Kazimierz Gałajda, with the reconstruction attributed to Joseph Rabiega. 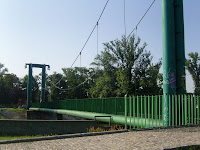 The bridge spans 56.5m, with pylons 10.5m high. The main suspension cables are 46mm spiral strand ropes. Both the pylons and the main deck beams are made from 457mm diameter steel tubes.

The pylons consist of portal frames, with the crossbar and legs each comprising twin tubes, "stitched" together with cross-stiffeners. These are ungainly enough, but made worse by the addition of frog-like protrusions at the top which carry lighting units. Presumably these give the bridge its "Frog Bridge" nickname. 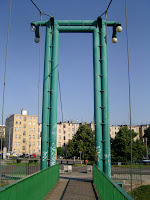 Sadly, the paired tubes are not unique to this bridge - I've seen them on a photo of another Polish footbridge. Overall, the styleless reliance on tubular steel in combination with bold colouring is emblematic of an undesirable trend which seems to have informed a great deal of Polish footbridge design.

The bridge evidently suffered from considerable vibration prior to its reconstruction, and tuned mass dampers were added to the midspan and quarter span points. These are large dampers, and quite easily visible in the first photo of the bridge above.