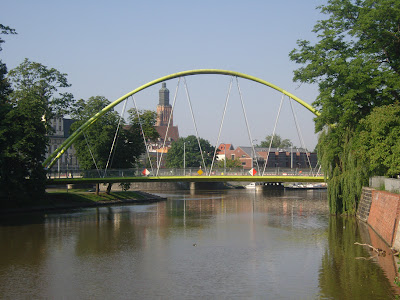 Not far from Kładka Piaskowa, another footbridge can be found which was built at the same time (2003), linking Słodowa island to the main riverbank. Kładka Słodowa is a steel bowstring arch bridge, with inclined hangers forming a triangulated system (this is stiffer than using vertical hangers, but is prone to load-reversal in the hangers if they are not sufficiently pre-tensioned). The designers were Research & Design Office Mosty-Wrocław with ISBA architects. 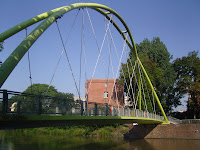 The arch spans 48m, and is 15.6m tall. It consists of two tubes, 508mm in diameter, and parabolic in profile, intersecting at a high level. Some form of connection is essential to brace the arches against buckling, but the choice to intersect in this way is essentially an arbitrary one.

The bridge deck consists of a cellular steel box girder with a curved soffit plate, similar to the nearby Sand Footbridge, and which picks up reflected light from the river in a similar manner. The deck is paved in blue-grey sandstone slabs. 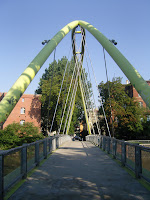 The bridge elements were fabricated in a shipyard and brought to site by boat for final assembly. The arch was assembled lying on its side, with a temporary bowstring for support, before being lifted by crane into the vertical position. Three deck sections were then erected one by one using temporary vertical strands for support.

This is a reasonably straightforward and attractive design. The view of the cables gets a bit confused because of the variation in angles seen from anywhere other than side-on to the bridge. As with the Sand Footbridge, the olive-lemon green colour is not unattractive, especially amongst trees, and the deck looks slender. 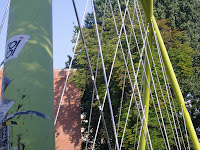 I'm not sure why they went for a different parapet here - mesh infill panels rather than horizontal wires - and as at its sister bridge, the parapets look quite utilitarian.

It's interesting to see one of the alternative options that was considered for the site, an asymmetric cable-stay bridge without any back-stays supporting the pylon (shown below). This would clearly have been more expensive, both in terms of the superstructure and the foundations. 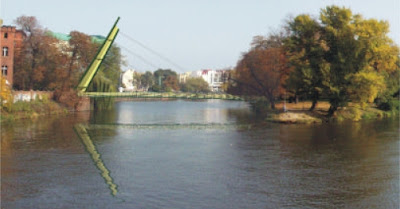 Posted by The Happy Pontist at 7:29 PM