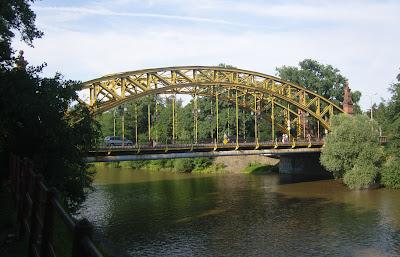 The most striking feature of Most Zwierzyniecki is the overhead bracing which connects its twin truss arches. 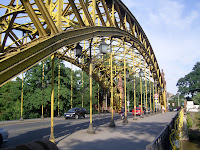 The bridge was completed in 1897 (replacing a two span timber bridge) but according to Wiesław Jurewicz, it was modified in 1910 "due to the hazardous vibration of the arch girders". That may account for the presence of just so much overhead bracing, which functions both as X-bracing in plan, and portal bracing in cross-section.

The bridge was designed by Karl Klimm, A Fruhwirth, and Richard Plüddemann. It spans approximately 60m and is 12.5m wide between the truss centrelines, 21.8m wide in total. It carries a highway and tramway across a side channel of the River Oder, in the vicinity of Wrocław's Zoo and Centennial Hall. An earlier span was reportedly called the Paßbrücke because it formed a checkpoint at the city limites. 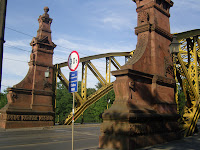 The main arch trusses have more than a hint of the later Hell Gate Bridge or Sydney Harbour Bridge about them. The upper chord is essentially a stiffening rather than primary load-bearing element, terminating in mid-air vertically above the lower-chord springing. This is disguised by the presence of decorative sandstone obelisks at each corner, just as the same effect is disguised by monumental abutments on the two larger and better know spans. 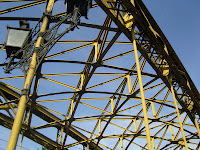 The yellow-gold colouring on the bridge's metalwork, and the intricacies of the truss and overhead bracing, put me in mind of a gilded cage, where the structure is as much as a shelter as a means of support for the floor.
You couldn't build a bridge quite like this today. Quite apart from the cost of the heavily laced metalwork, the hanger bars are unprotected against impact from traffic. While it's acceptable to design a bridge for the possibility of loss of a single hanger, this bridge clearly suffers from the potential for multiple hangers to be lost in a single incident.

Technicalities aside, I found Zwierzyniecki Bridge to be a lovely bridge, with a great deal of antique charm.