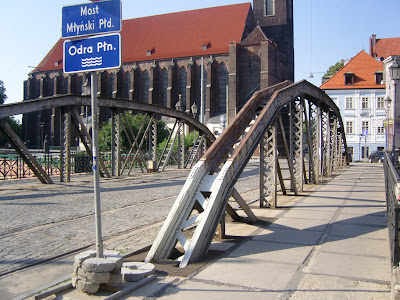 The two Mosty Młyńskie originally spanned over the streams for two watermills, named Maria and Feliks. The latter mill has been demolished, but the former is still present, although disused. 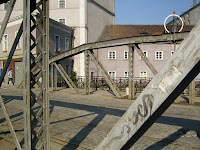 As with Sand Bridge, there were bridges here for several centuries. The current steel parabolic arch trusses date from 1885, and are clearly a more developed design than the Sand Bridge. The general form of the truss is such as to follow the typical bending moment diagram for a simply-supported span, making a more efficient use of material than in a more uniform truss. The web members are also more open than in the lattice truss form which was previously prevalent. 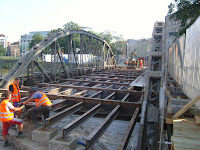 The two bridges span 28m and 36m respectively, and are of slightly different heights. The slightly flattened top to the trusses is characteristic of the so-called Schwedler Truss. I presume it was done this way to cater for the variability in live load positioning, responding to the envelope of load effects rather than simply uniform loading over the entire span.

The northern of the two spans is currently being refurbished, and the bridge is closed to its normal roadway and tramway traffic.

In their current form, I am not greatly enamoured of the bridges. They are very honest structures, but as Schwedler himself is reported to have believed, the flattened arch form is not the most attractive.