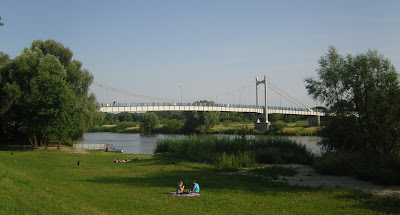 Heading eastwards and back out of town along the River Oder, you come to Kładka Zwierzyniecka.

Spanning 86m, this suspension footbridge's main function is to carry two large diameter water pipes across the river, although it was also well used by pedestrians when I visited. 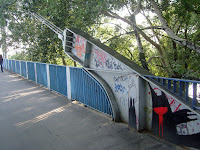 It was built in the mid-1970s, and designed by M. Wróblewicz. The deck and towers are both in steel, and the bridge is self-anchored in form i.e. the main cable force is carried by the deck rather than anchored into the ground. The attachment between the deck and the cables can be seen on the right: triple cables are carried through a single pin into a stiffened cantilever bracket.

Zwierzyniecka Footbridge has a simple, highly functional design, to the point of near-brutalism. However, the lack of bright colour and odd protuberances makes me more sympathetic towards it than the other suspension footbridge I visited in Wrocław, the Frog Bridge.

It's not by any stretch of the imagination beautiful, but I quite like its sense of austerity.

The next post will be the final one in this series, and I've saved one of Wrocław's least known, but most impressive, bridges for last.

Posted by The Happy Pontist at 8:17 PM