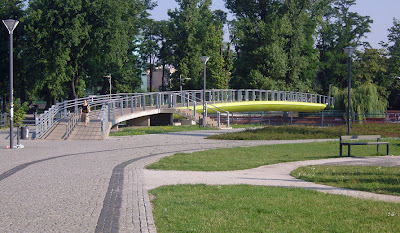 Most of the bridges in Wrocław that I've covered so far in this series have been historic in nature. The next two or three, however, are all relatively contemporary designs. 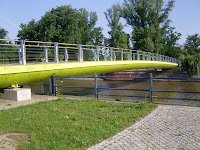 Kładka Piaskowa was built in 2003, and is a three-span pedestrian bridge (spans 4.5m, 45m, 4.5m), designed by Research & Design Office Mosty-Wrocław with ISBA architects. The deck is 3.19m wide and 1.06m deep, and comprises a steel box girder with a curved soffit. The deck is painted a lemon-olive colour, while the steel parapet post are painted light grey. The deck surfacing consists of Iroko hardwood planks. 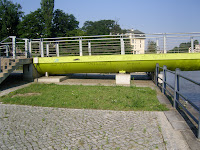 Essentially, it operates as a fixed-ended beam, which allows the relatively large span-to-depth ratio to succeed. The deck is of a constant depth, but is lightly arched. The photo on the left illustrates the support system. The transition to the much shallower approach ramps looks as good as can be expected for something which is always very awkward.

The bridge was erected by "pull-launching", with its front end supported on a barge while the whole deck was towed across the river from one bank. 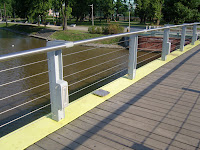 What's especially pleasing about this footbridge is its undemonstrative nature - there is no attempt to be unnecessarily showy, unlike some Polish footbridges. The low profile was a deliberate attempt not to interfere with historic riverbank views. The parapets are somewhat utilitarian, but not so much as to ruin the design.

The curved underside of the deck picks up shimmering reflections from the water below, and enhances the impression of slenderness. The colour seems initially a little odd, but it is muted rather than garish.