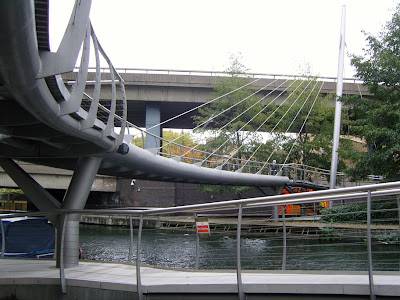 This is the last of four footbridges that I visited in Paddington Basin, London. It is the furthest west of the group. 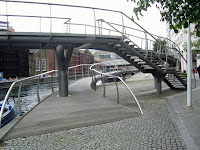 I will confess that what first attracted me to go and visit this bridge was a photo of it online showing the slightly unfortunate positioning of one of the main support legs - right in the middle of the access ramp! It has clearly been built on a very constrained site, but I'm at a loss as to why they couldn't avoid this.

The bridge design seems to pick up on several common features of a "modern" pedestrian bridge, throwing them together in a haphazard jumble that not only is unnecessary at this site, but would be so at any site. These design features aren't connected by the usual logic. 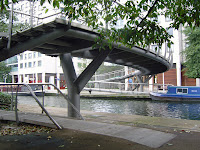 One feature is the use of cables to support the bridge on one edge. The pylon is connected to the deck with a series of cables, and is anchored by back-stays to the ground. At this sort of span, cable support isn't really necessary, and when you see the bridge from underneath, it appears doubly so.
The bridge is supported on Y-shaped steel frames at each end of the main span, and the main girder looks beefy enough to hold the entire deck up on its own. The cables introduce a horizontal force into the deck which must be resisted by the Y-shaped frames, emphasising the artificiality of the layout (the horizontal force is normally carried as a thrust in the deck directly back to ground). With this arrangement, supporting via vertical hangers from an arch would have made more structural sense. 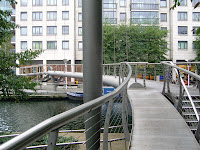 The circular edge girder is positioned in such a way that there's no clear continuity between the access ramps and the main span's bridge deck. No doubt some of this ungainliness is a result of the constrained site, but I suspect more of it comes from trying to match the bridge's necessary geometry to an arbitrary and inappropriate choice of structural form.
In short, it's an object lesson in how not to design a footbridge, well worth visiting just to see what mistakes to avoid.
Further information: