The next few posts follow something of a guerilla tour around the footbridges of Paddington Basin, London. This canal terminus has undergone considerable redevelopment over the last decade, and a number of bridges have been installed both to improve access and to gain attention through their novelty value.

Before visiting, I'd heard of a fellow bridge photographer who had been unable to take pictures on the site thanks to over-zealous security guards. I'm a pontist, not a terrorist, but I thought it best to take photos quickly and not hang around. You'll therefore have to bear with me if some of the photos aren't of the best quality. 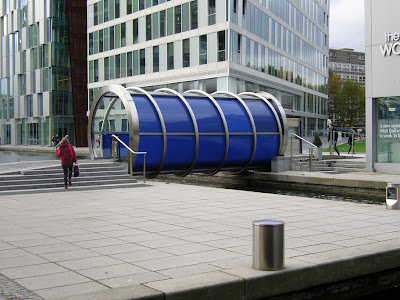 Somewhat prosaically also known as the "East Bridge", the tiny Helix Bridge provides access across the east end of the canal basin at Paddington. Completed in 2003, it spans a mere 7.2m. It was designed by Buro Happold with artist Marcus Taylor, and built by Davy Markham.

It is designed to retract, giving the impression of a corkscrew as it does so, albeit very, very slowly, moving at a snail-like 75mm per second. The "corkscrew" effect is simulated: the enclosure assembly rotates on bearings within the two circular end hoops. These in turn are supported from a retractable 2m wide walkway structure, which cantilevers from one end. This sits on a powered trolley, which runs on rails. As the walkway retracts, the enclosure rotates.

The 3.5m diameter enclosure comprises 15mm thick curved glass panels, glued to the tubular framing. The main spiral element is a 140mm diameter stainless steel tube. The bridge has clearly been altered since construction, with what were previously transparent panels now replaced or covered in blue material. I presume this is a response to vandal-related glass breakages. 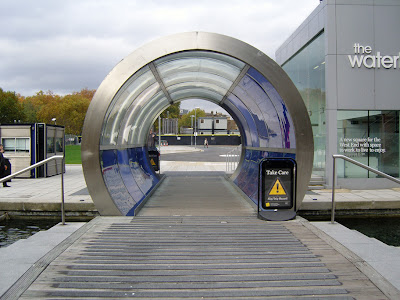 I gather that the bridge has not been able to operate for some time, and have seen a comment from British Waterways on an online canal forum that it would "cost a considerable sum of money to repair", clearly disproportionate to the value that opening provides. BW also report that the bridge is due to be replaced by a new lifting bridge, presumably one with a less complex mechanism, and hopefully not destined for a similarly early graveyard.

Re "Im a pontist not a terrorist", the same phenomenon is widespread in HK. Public spaces are taken over by developers, private "security" personal are constantly on the prowl, video cameras are everywhere. I notice in your photo that there is no seating provided for passers-by in this barren space. Normal human beings are not welcome?

What a disappointing end for the bridge - and I wonder who will pay for the new one?

Hi,
talking about guards - I made exactly that experience when I went to Paddington Basin this summer.
I had wanted to take a look at Thomas Heatherwick's Rolling Bridge (I love bridges, too!) and ended up spending quite a while there, wandering up and down and having a close look at all the buildings, and the blue bridge, too.
When I told the guard that I was interested in Thomas Heatherwick's works and taking a stroll along his London works that day he looked confused and a bit incredulous, obviously never heard that name before. But when I told him about the exhibition in V&A he calmed down. His explanation: "This is private ground, and the house behind you (one of those between the Blue and the Rolling Bridge) is a governmental building". No idea if that is true - but even if it was it's no reason for treating obviously harmless people as terrorists. I was really annoyed by his grumbly lurking while I was trying to find a good angle to take photos. Why did they invest into an embellishment of the area if they don't want people who look at it?

I was on this build and didn't once meet or see Davy Markham. The main contractor was Kvaerner and I was working for Beck and Pollitzer...