Proceeding west from the Rolling Bridge, I'll skip past a very dreary cable-stayed footbridge and move on to one that is a little more interesting. 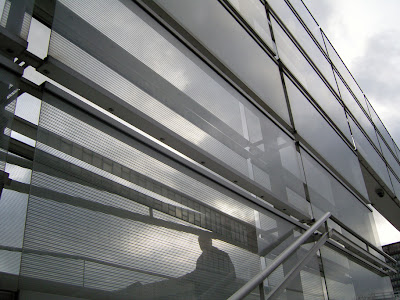 Designed by Langlands and Bell with Atelier One, the main section of this footbridge is 44m long, with a 19.6m main span. The deck is 3.5m wide, and is suspended below a glass-clad steel "sail", 8.4m high. Langlands and Bell are artists (I think this may be their only bridge design?), not architects, specialising in an quixotic blend of styles which I would think of as pop-art-meets-minimalism. At Paddington, minimalism wins out - this is a bridge as if designed by Donald Judd.

The effect is quite unlike most footbridges. It's a proper gateway structure, proffering a letter-box entry to Paddington Basin from the west, and helping to hide an unattractive building when approached from the east.
Structurally, it is not especially complex. The walkway is a simple grillage of steel beams, suspended at midspan by a single hanger, with diagonals partially obscured by the glazed enclosure above. The form is an inverted king post truss, which is about as simple as it gets. The walkway cantilevers to either side of the support structure, supporting structural glass balustrades. 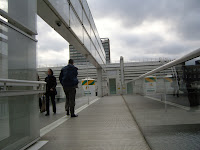 I think the glazed wall is visually very effective, particulary in images showing it illuminated at night. It's non-functional, in the sense meaningful to an engineer - it makes the structure harder to design, by adding enormously to the wind load, but the central cut-out prevents it from acting as a wind-screen. It allows for multiple alternate crossing experiences, and is boldly assertive but visually permeable.

Even visiting it on a dully grey day didn't harm it much. It helps distract from the dreary nature of the nearby building, and even from an adjacent construction site. 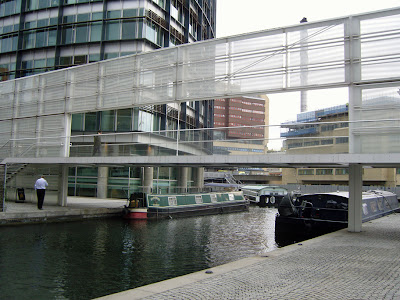