From the Dutton Horse Bridge, my journey ran south along the River Weaver. The next bridge of significance gives its name to the small town of Acton Bridge.

It was designed by the same John Arthur Saner who designed the Dutton Horse Bridge, and apparently many other structures along the River Weaver. The current bridge opened in 1933, replacing a previous structure which had been able to carry only one line of traffic with an axle weight limit of 8 tons. 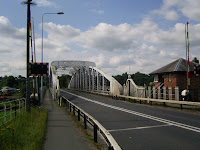 It is 83.5m long, with two slightly skew spans of 25m each. It's estimated cost at the time of construction was £52,000, excluding the diverted approach roads. The superstructure comprises twin riveted steel trusses, supported on a mass concrete pontoon chamber. One website describes it as "the first floating swing bridge in Britain", although I think there is some confusion there with the nearby Northwich Town Swing Bridge, which has a plate on it claiming it to be "the first road swing bridge on floating pontoons". 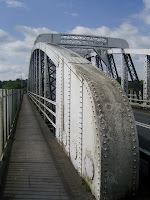 In its structural form it is typical of many truss swing bridges of the period, and not as elegant as some. The overhead bracing seems particularly over-designed. The curved profile of the truss is visually satisfactory but does not optimise the level of stress in the main members. Structurally, this particular profile's main benefit is to keep the overhead bracing clear of vehicles.

The use of contrasting black-and-white paint is common to many of the structures along the River Weaver. 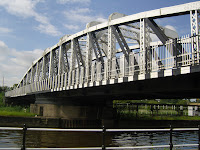 With the truss main members and verticals painted white, and the diagonals black, there seems to be an intention to define a visual hierarchy of members and perhaps de-emphasise some. There is no great structural logic behind this, as the diagonals are as important to the bridge's overall strength as the verticals.

The edge of the bridge deck is painted with black and white bars, presumably to warn of limited headroom. Interestingly, the footway parapets are painted with the same alternating pattern. This makes the parapet appear to dissolve into a series of isolated panels with open gaps between them, which is a peculiar effect, if intentional.

It's even sadder that you didn't bother to read the first post in the series where I explained clearly how I was interpreting "Merseyside": http://happypontist.blogspot.co.uk/2011/10/merseyside-bridges-1-southport-pier.html I mean really, that's your only comment, that the title is misleading?