This is a short detour from Merseyside, however broadly that area might be defined. From Runcorn, the journey heads south-east towards Northwich. I stopped off at two bridges before returning north to the River Mersey. In broad outline, this route follows the course of the River Weaver, which is a tributary to the Mersey. 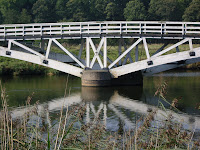 The first of the two structures is Dutton Horse Bridge. This twin-span timber bridge was completed in 1919 to a design by John Saner, who was the engineer responsible for many works along the River Weaver when its navigability was improved. The Dutton Horse Bridge spans alongside the river's main course, over a secondary channel used to help regulate the water level. 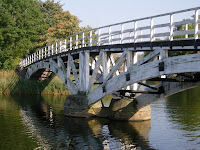 It is historically significant as one of the earliest surviving bridges to feature laminated timber. The laminated arches span about 31m, with two ribs slightly out of line with each other. Triangulated timber struts stiffen the arches and support the deck.

As with many timber structures, it's certainly an attractive bridge, and it's great to see it has survived so well. Two span bridges are reputed to suffer from the problem of the "unresolved duality", where the viewer lacks a primary visual focus and so feels discomfited. This is a phenomenon that has received support from at least one experimental study, where viewers consistently tended to prefer one or three-span bridges to those with two spans. At Dutton, the bridge is rarely seen in full elevation, as the footpath on the opposite side of the river seems not to be the main route. From any other angle, the number of spans is hardly relevant. Even in full elevation, I think it looks fine.

The black-and-white paint scheme is characteristic of several bridges along the Weaver, including the one I'll come to next.

A problem I have with two span river bridges is that the bridge and it's reflection often give the illusion of a pair of eyes or glasses staring back at me!

Are the laminated timber arches the originals from 1919?

I don't know for sure that they are the originals, but they certainly don't look like they've been replaced recently.

Thank you for showing us another charming bridge with its interesting design & superb photos. Maybe the secret of longevity lies in the species & quality of timber that was selected for the laminated beams and other sections of the bridge? Do we know how the timber was treated? Long ago you wrote about the Leonardo Bridge of laminated timber opened in Norway in 2001. The Norwegian climate is much ruder than at Dutton of course.
http://www.leonardobridgeproject.org/eng-applied-art.htm
In any case Dutton Horse Bridge appears to be in extremely good condition for its age.

All I know about the timber is that it is greenheart.

Thanks HP, you've said it all in one word: http://tropix.cirad.fr/america/GREENHEART.pdf
Another comment from UK Workshop forum: "I've just had a look back through my notes from college (Toxic Woods) and Greenheart is probably THE MOST LETHAL TIMBER on this list!! Reported adverse health affects include: splinters going sceptic; cardiac and intenstinal disorders; severe throat irritation. I remember our tutor telling us how he was once working with a friend in a joiner's shop, who was happily turning away with some greenheart on the lathe. Turn around, he's lying on the floor & has gone into a cardiac arrest - all because of exposure to this particular dust! (He did survive.) MDF may be bad enough but Greenheart could kill you! Common uses for the timber include: Marine uses; Axe handles; factory flooring and sports goods.