"Disaster on the Dee: Robert Stephenson's Nemesis of 1847"

] with more trepidation.
The book tells the tale of the collapse in May 1847 of Robert Stephenson's bridge over the River Dee, built for the Chester and Holyhead Railway. The bridge had opened to rail traffic in November 1846, and five people were killed when it failed. Stephenson was heavily criticised, but went on to open the more significant Conwy and Britannia Bridges in 1848 and 1850.
The Dee Bridge spanned about 30m, and consisted of two parallel track beds, each supported by paired cast-iron girders. It was one of the longest such bridges then built, and well illustrates the dangers of pushing a proven structural form beyond safe limits. The propensity of cast iron to sudden, brittle failure was already well known, and the collapse was just one of many which dented public confidence in railway developments. It's not at first sight, therefore, such a significant bridge failure in itself as to merit book-length treatment. 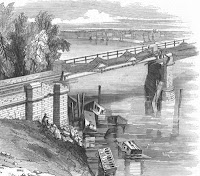 Fortunately, Peter Lewis's book ranges far beyond the Dee Bridge disaster, to the extent that it's a very useful history of the structural use of cast iron, the development of metal bridges in the 19th century, and the development of railway bridges. The Dee Bridge may establish the headline, but is only one small feature in a much larger tapestry.
The Dee Bridge was an example of a so-called trussed girder, three separate cast iron segments bolted together and "reinforced" with wrought iron bars in the form of an inverted queen-post truss. The trussed girder concept was not Stephenson's, but had been introduced by Charles Blacker Vignoles some years previously. The truss bars were intended both to provide a back up against cast iron failure, and also somehow to enhance the overall strength of the girder.
Although the Dee Bridge disaster lacks the notoriety of the Tay Bridge, Tacoma Narrows, or Millennium Bridge, it has been a popular subject amongst other writers on engineering failures.

(1994) uses it as a case study, "a paradigm of success masking error". Petroski draws on an unpublished PhD thesis by P. G. Sibly to show precisely the extent to which the Dee Bridge went beyond previously safe spans (click on the graph on the right) - even by the standards of its time, its calculated factor of safety against failure would have been low. Petroski attributes the failure to lateral torsional instability, noting that the almost T-shaped girders had no bracing to prevent lateral deflection; and that the eccentricity of the wrought-iron ties tended to introduce a destabilising force, as does the fact that the deck system loaded only the inner half of the girder bottom flange. The trigger for failure was the addition of 125mm of ballast load to the bridge the day before the collapse.
Lateral torsional buckling, as with any slenderness related effect, is a phenomenon which may not be an issue at all at smaller spans, but which grows in significance rapidly beyond a certain threshold. Petroski's lesson is, however, not about this narrow technical issue, but about the broader dangers of "extrapolatory design".
The bridge also features as a short case study in Failed Bridges (2010) by Joachim Scheer, who essentially follows Petroski's narrative in terms of the reasons for failure, both technical and cultural.
In Understanding Bridge Collapses (2008), Björn Åkesson devotes his first chapter to the Dee Bridge. He notes some wider technical issues. The wrought iron tie bars were unlikely to have been as effective as was imagined: the inclined bars rely on their anchorage in a "bulge" above the girder ends to work, but this bulge is prone to move inwards under girder deflections. The result is that the tie bars may have been almost entirely ineffective. Åkesson also shows that the simple rules for girder section sizing used by Stephenson (originally derived by Eaton Hodgkinson) would have underestimated tensile stresses in the bottom flange, due to the lack of any understanding of the concept of a neutral axis.

Åkesson discards the lateral torsional buckling theory on the grounds that some instability would have appeared prior to the addition of ballast, and also that the very thick girder webs would have provided sufficient U-frame action in any event. He is the only author to prevent what you might think is obvious, actual calculations for the static and fatigue stresses, which strongly suggest that static stress was far more of an issue than fatigue (an example is shown on the right). Åkesson points his finger of blame at the connections between the tie-bars and the girders, suggesting that over time, the harder material of the connecting pin would cause plastic deformation of the cast iron, and ovalisation of the connecting hole. Gradually, this would eliminate any beneficial effect of the wrought iron bars, leading to a simple tension failure once additional dead load was introduced.
I guess the genesis for Disaster on the Dee was the author's 2004 paper Aesthetics versus function: the fall of the Dee bridge, 1847. The paper, and the technical examination of the bridge failure presented in the book, make clear Lewis's background in forensic engineering, particularly metal fatigue, which he posits as the reason for the collapse. This is despite there being no surviving evidence which would support the theory (e.g. pictures of the girder crack surfaces), and a complete unwillingness to offer even the simplest of calculations. This would not have been difficult, as Åkesson's contribution shows.

Lewis discounts the possibility that failure resulted from lateral torsional buckling by stating that "this is not a failure mode, but rather a symptom of an underlying problem involving design". That's the language of a metallurgist. To a structural engineer, it's quite definitely a failure mode. Similarly, Lewis rules out failure under static overload on the grounds that the train successfully crossed several girders before reaching the one that failed, suggesting the failed girder had a prior fatigue crack. This strikes me as spurious: surely the failed girder could simply have had a defect which the others lacked, cast iron of the period being notorious for variable properties and inconsistent quality of manufacture.

The varying explanations of the Dee Bridge failure seem to indicate how strongly perceptions of failure can be influenced by an investigator's background: you find what you look for. Many years after the event, no one explanation can be proven fully correct, and they all offer useful insight into lessons that may be valid elsewhere. To me, however, the value of Disaster on the Dee lies beyond the central case study.

The book's first chapter discusses early iron bridges and gives a useful primer on how iron was cast, with particular reference to Iron Bridge in Shropshire. The next chapter explores the extension of cast iron into canal aqueducts such as those at Longdon-on-Tern and Pontcysyllte, while the third survey early railway history, including the use of iron in steam boilers. The fourth chapter covers the build-up to the design and construction of the Dee Bridge, while bringing in other structural failures in rail bridges and cast iron buildings.

After the exhaustive account of the failure and subsequent enquiries, the book goes on to look at how Stephenson's later bridge designs avoided the pitfalls which befell the Dee Bridge, and recounts many other railway and bridge catastrophes, painting a picture of an engineering industry which was slow to learn lessons from its hubris and folly. I found all these sections of the book to be hugely informative, and would recommend it for that alone.
Posted by The Happy Pontist at 8:52 PM

Hi HP, I think us readers are getting tired of your well written and insightful blog posts. (Do you ever sleep?)

I think we can all agree more youtube videos would be the way to go here.

(Reading is overrated, in fact, we are thinking of banning it here is the US.)

Just a thought, keep up the good work. (but seriously, maybe throw in a cat video once in awhile.)

I guess you don't read my other blog, The Purring Ailurophile?

Well, I welcome your informed reviews, partcularly on themes like this. By the bye, I see 'Disaster on theDee' has been remaindered at a bargain price.