The last two posts were a bit of a diversion from Merseyside, not being very near the River Mersey for a start. This time, it's back to the River, although whether Warrington is part of Merseyside is perhaps a moot point.

There are plenty of bridges in Warrington, but I only had time to visit two. 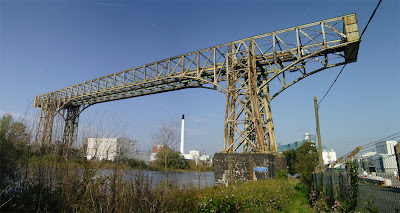 The Transporter Bridge at Warrington was something of a must-see. It's one of only three surviving transporter bridges in Britain, although sadly it's by far the most neglected of the trio. It has been a presence on English Heritage's "At Risk" register for some years now, I believe. 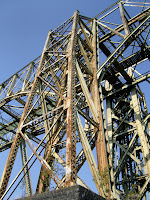 It was originally built to service the Crosfield chemical and soap works. A railway siding to the east ended at the river bank, but wagons were transferred onto the transporter carriage and brought over the river. The rail tracks, long since disused, still run through an adjacent site. Today the site of the soap works is occupied by chemical firm Ineos Silicas, and the bridge hasn't been used since the 1960s, becoming increasingly derelict has the years have passed. Today, the bridge is maintained by Warrington Borough Council, but as it serves no practical use, it has not been well looked after. 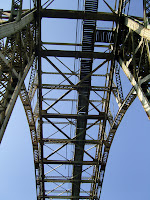 It's also a pretty tough bridge to get to. The west abutment, within the Crosfield site, is only accessible with special permission. The east abutment involves negotiating a convoluted route through the grounds of an industrial works, or, as I did, approaching via an overgrown and somewhat forlorn pathway. The combination of lack of use and difficult access mean that any attempt to preserve the bridge for much longer may be essentially futile. I can't see how it can survive in this situation, and if it were to be relocated, that would sever the link with its historic context.
The photos make clear that this was never a pretty bridge, certainly not by comparison with its fellow transporter bridges at Newport and Middlesbrough. Its portal truss form is squat and inert, and if the latticed metalwork holds any visual attraction, it's surely only for the most committed industrial archaeologists or those besotted with the romance of dereliction. 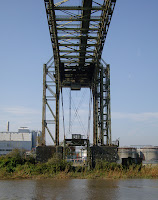 So, it sits there and rusts. Some indication of quite how decrepit the bridge is can be gleaned from two websites with photos from unauthorised visits.
The gondola can be seen in the last photo, on the west bank, and it's still just about possible to close your eyes and imagine how it might have looked while still in active use.
Unless someone has the appetite for something radical, such as relocation, I would expect the bridge to be fenced off as dangerous within half-a-dozen years, and gone within the next decade or two.

Posted by The Happy Pontist at 8:43 PM