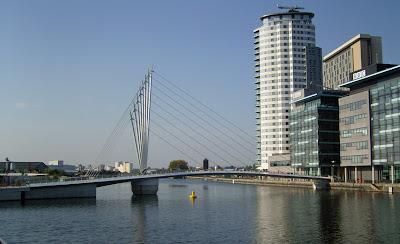 I had been waiting to find out when the new Gifford and Wilkinson Eyre-designed Media City Footbridge in Manchester was due to open to the public, only to discover on a chance visit at the end of September that it was in fact already open.

It's an asymmetric bobtail swing bridge, spanning across the Manchester Ship Canal. It's 83m long overall, with a 63m main span. To the north, it provides access to the new Media City development in Salford, the new home to several departments of the BBC. On the south bank, it currently connects to the Imperial War Museum North, but will eventually link in to a new ITV studio development. 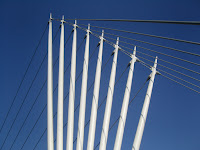 The bridge deck is supported by a harp-style cable-stay layout. The cables support one edge of the deck, and connect to eight steel masts in a fan arrangement which I previously likened to a giant skeletal hand. I think perhaps the design visualisations were a little unflattering, as now that I've seen the (nearly) finished structure, it is a much more attractive creature.

The odd assemblage of masts arises from the formalism of the geometry. The cables establish a harp arrangement in elevation (i.e. they are parallel when viewed from that angle), and are tangential in plan to the curved edge of the deck. This creates a geometry where the cables must be supported at eight separate positions in space, rather than from a single mast. 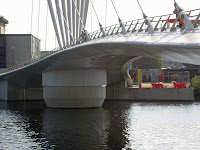 The supported edge of the deck is a deep triangular steel box girder, paired with a shallow box below half of the deck itself. These provide the necessary torsional and bending stiffness, and support the other half of the deck via a series of cantilevered ribs, visible in the photo (click on any image for a full size version). The alignment of the edge girder is not quite perfect, but I don't imagine the casual observer will notice. The image also shows the flared width of the backspan, which conceals a concrete counterweight used to balance loads on the pivot pier. 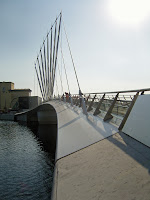 The sharp edge of the box girder is such that it's depth is almost completely disguised, with the upper surface appearing as a streamlined fascia, and the lower surface disappearing into shadow along with the rest of the bridge soffit. On the face of the girder adjacent to the deck, glazed panels act to obscure it, and these conceal light fittings which help illuminate the deck at night and distract further from the beam's structural mass. 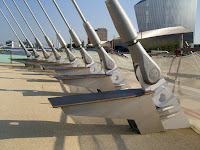 The cables connect the masts to the rear of the back-span, and the anchorage points have been adapted to provide jaunty little seats. Between the anchorages, users can walk straight into the future ITV site, although the steps and handrails were still under construction when I visited. People walking towards the Imperial War Museum bypass the anchorages completely. The detailing of the anchorages and seats is very nicely done. In the background of the photo you can see the Museum on the right, and on the left is the Lowry Millennium Bridge, which I've visited previously. 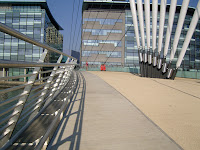 As with many Wilkinson Eyre designs (see for example South Quay and Swansea), a conscious effort has been made to treat the two bridge parapets differently. I've already mentioned the east parapet, which does an impressive job of hiding the main deck girder. While I was on site, there was at least one panel of the lightbox where the glass had shattered, and several more temporarily dismantled - I'm not sure whether this was to work on the glass or on the light fittings. This is a reasonably well-used and well-policed location, so I would hope that vandalism isn't a recurring issue.
The west parapet is a post and rail system in stainless steel, with some lighting concealed in the uprights. You can also see in the photograph above right how the deck surfacing is divided, with a resin/grit finish to the underlying steel box girder on the right, and aluminium decking panels on the left. 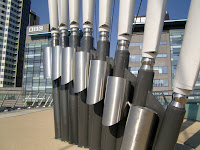 One element of the bridge I particularly like is the detailing of the mast pedestal (the large silver cylinders are uplighters). Each mast sits on a stainless steel ball bearing. You can also see the bottom edge of the mast, which is lens-shaped in cross-section. The cigar-like masts have been cut, bent and re-welded from basic circular hollow sections, and I think the result is visually very attractive. 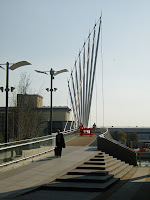 Not all the detailing is perfect. I particularly disliked the cover plate to the north expansion joint, which is in two hinged sections to be manually flipped out of the way before the bridge is opened. It looks like an afterthought rather than something properly considered.
The bridge's main visual feature is the way the mast and cable array changes as it is viewed from different perspectives. The simple harp-like arrangement of the cables is clear only from the main elevations, and from other angles it is clear that their geometry is much more complex. The photo above right shows that they appear warped when viewed from the north end of the bridge. 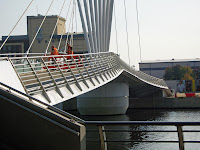 Not every part of the bridge adjusts to changing perspective so well. The deck's vertical curvature is a careful compromise between canal navigational clearance demands and the geometry of the canal banks, with the deck ramping down at 1:15 to meet the ground. While the curve looks gentle from most locations, the S-shaped curvature of the west edge of the deck is such that in a foreshortened view, the deck looks to have broken its back. The same thing can be seen on the Tradeston Bridge in Glasgow, which shares the S-curve in plan. I doubt that anyone other than over-fussy bridge designers will spot it, however.
Quibbles aside, I was very pleasantly suprised by the Media City Footbridge. I had completely underestimated the quality of the design beforehand. I would now say it is well up there amongst the best major pedestrian bridges built in the UK in modern times, a genuine rival to the same design team's Gateshead Millennium Bridge. It has been shortlisted for an Institution of Structural Engineers Award, and deservedly so. 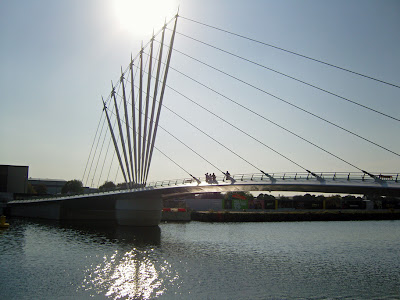 Further information:
Posted by The Happy Pontist at 11:00 PM